A con artist is sending fraudulent Department of Health and Mental Hygiene letters to New Yorkers claiming they must pay a $120 fee for a violation of "vermin control" rules.

Word of the scam surfaced Friday morning in a posting on Reddit, and a tipster from the north Bronx later wrote in to Gothamist that she'd received one of the scam letters on Thursday.

The not-particularly convincing "Notice of Violation" instructs the recipient to send a check or money order for $120 to "Vermin Control of New York," at an address in Queens.

The letter warns that under the city's Housing Maintenance Code, the violation cannot be challenged. It also lays out extortionate penalties for delinquency, beginning at $120 for 1-15 days late and rising to $280 for 16 - 30 days late. After 30 days, the letter claims, the violator will face a "court hearing of lein [sic] to be place on property."

A quick Google Maps search reveals there is no Vermin Control of New York at the listed address, 1255 150th Street. We called the Law Offices of George Kosnik, which has a storefront at 1255, to ask if they'd heard about the scam, but no one answered the phone. (Kosnik's hold music is "Firework.")

The signature at top is the forgery. The real signature, found on a 2011 DOB document, is below.

The scam letter is signed by "R. Limandry, commissioner of buildings." The scammer apparently was too lazy to do some basic research, since the current DOB commissioner is Rick Chandler. LiMandri was the Department of Buildings commissioner under Mayor Bloomberg. As you can see, the scammer also wasn't a very good forger.

When Gothamist called the phone number on the letter, it was immediately directed to a recorded message saying the line was busy. The area code is for the Albany area.

A Redditor with an sense of humor, writing under the handle droy0, claimed to have purchased the URL listed at the bottom of the letter—www.vcbnyc.com—which now redirects to the Reddit thread about the letter. 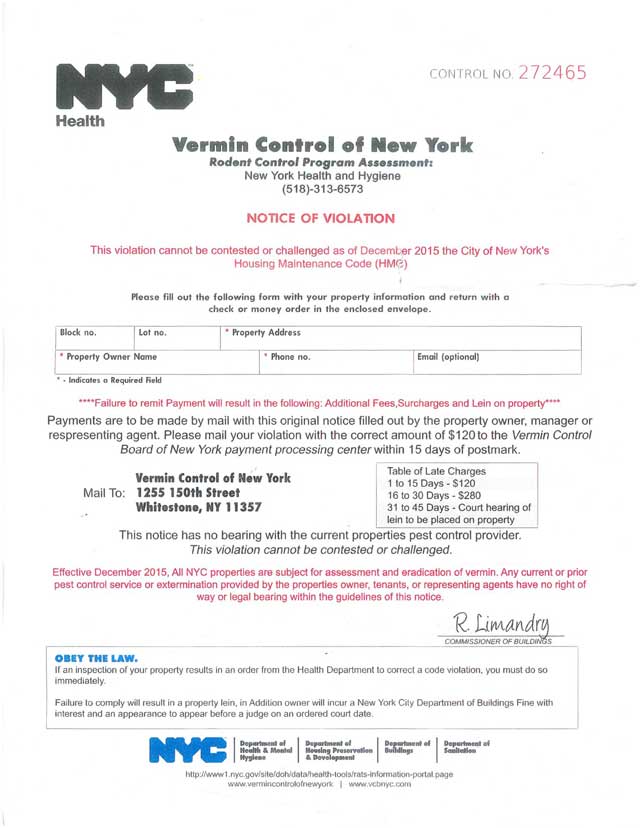 #scam
#vermin scam
#original
Do you know the scoop? Comment below or Send us a Tip