Last Thursday, a massive power outage enveloped an estimated 19 of Venezuela's 23 states in darkness. The cause of the blackout is a matter of debate, but energy experts believe it resulted from a combination of neglected infrastructure and negligence at the hands of the military, which has been managing the network instead of experienced technicians, as The Guardian reports. Nicolás Maduro, the contested President of Venezuela, is blaming the blackout on a United States-led sabotage.

For years, Venezuelans have been suffering through ongoing crises of diminishing resources, a public health collapse, and widespread hunger stemming largely from an economic downturn and ongoing political strife. Following a 2018 election widely viewed as fraudulent, Juan Guaidó, the leader of the opposition's National Assembly, appointed himself as the interim president of Venezuela in January. The United States has joined most other European nations in recognizing Guaidó as president instead of Maduro.

Over three million Venezuelans have fled the country in recent years, seeking asylum across the border in Colombia or elsewhere. An estimated 90 percent of people in Venezuela currently live below the poverty line, as The New Yorker reports, and hyperinflation has made buying food exorbitantly expensive, if it's even available.

Last week's power outage knocked key transportation systems out of service, halting people's ability to go to work, school, or even find their way home in the dark. In many places, it also disrupted the clean water supply, leading people to desperately try and gather it wherever they could, including stray droplets culled from pipelines and contaminated streams.

Information Minister Jorge Rodriguez stated in a press conference on Wednesday that power had been restored across Venezuela, and that 80% of people now had access to drinking water. Rodriguez said that work activities would resume on Thursday, though it's unclear if schools are in session.

But outside of the capital of Caracas, power remained unreliable on Thursday. Daniel Anteliz, who immigrated to New York from Venezuela in 2015, says the power supply is still weak, resulting in a kind of "half light." On Twitter, Venezuelans shared their individual experiences of the blackout, including the anxiety of both giving birth and returning home to no water or light; recounting stories of family members who had gone days without dialysis, and who wondered if they would live to see another day; children not understanding what was happening, and asking their parents why they were no longer able to see.

Adela Dessiré, a Venezuelan doctor, wrote that the most harrowing part was "seeing night fall in silence and complete darkness...feeling at the mercy of the elements by attempting to sleep outside because of the heat."

The blackouts prompted anxiety for Venezuelan New Yorkers as they struggled to communicate and locate friends and family amidst the confusion. Anteliz tells Gothamist that he was somehow able to speak briefly to his mother, who still lives in the capital, on Friday, the day after the power went out. After then he wasn't able to reach her for three days.

Anteliz's cousin Adrián Rivas, an activist from Voluntarios x Venezuela NY who moved to New York five years ago, says that his immediate family members are okay, but many people haven't been able to confirm the whereabouts of family members and friends. "A lot of people didn't get back home, and it's still unknown where they are," he says. "There are a lot of people who are lost."

At least 20 people have perished thus far because of the blackout, the most severe in Venezuela's history. It's thought that the number of the deceased is likely much higher, because Maduro's government has a history of under-reporting the human toll of the country's ongoing collapse. Many of those people died when receiving care at hospitals.

International humanitarian aid hasn't made its way into Venezuela as planned. Last month, aid arriving across the border in Cúcuta, Colombia, was blocked by Maduro's military forces.

Nevertheless, organizations throughout New York City have been working to help send supplies to Venezuela, Voluntarios x Venezuela NY included. Rivas says that two weeks ago, the group helped package and send over 160 boxes of food, diapers, and other necessities headed to Venezuela. 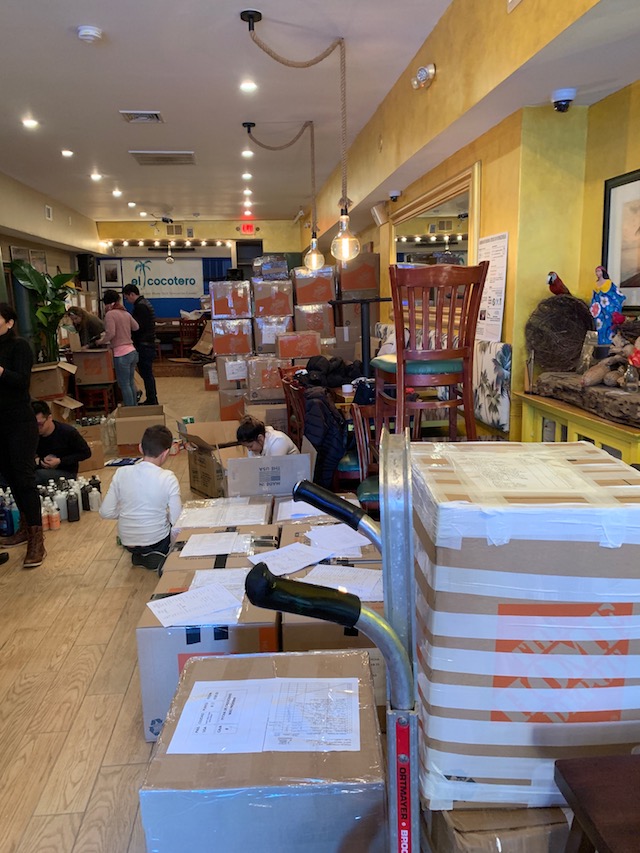 Erick Rozo, a New York-based organizer with the opposition party Voluntad Popular, says that they have been working to connect local organizations with Venezuelans, offering help with legal recourses, medical assistance, and more. Lately, he says, the group has particularly focused on establishing a network of emotional and mental health resources for Venezuelan New Yorkers who are going through a tough time, especially watching everything unfold from afar.

"We have people who are very depressed, people going through tough situations," Rozo says. "Because all of us here, we have the majority of our families in Venezuela, and we are mentally in two places at once...there's a moment of natural collapse."

This Saturday, the activist group SOS Venezuela is gathering with local organizations and calling on New Yorkers to join them at a vigil in front of the Lower East Side's St. Teresa's Church at 7 p.m. They are urging people to bring candles—due to the darkness persisting in Venezuela—while urging the international community to help halt the ongoing human rights crisis, and especially in helping aid reach Venezuela.

"We're asking the international community to do something more than simply listening to us and that they take action," Rivas says. "If they don't act, people are going to keep dying."

#activism
#blackouts
#juan Guaidó
#nicolas maduro
#political
#poverty
#turmoil
#venezuela
#water
Do you know the scoop? Comment below or Send us a Tip