by Trevor Kapp and Nathan Tempey

The owner of a Brooklyn catering company who recently disappeared, leaving an untold number of couples out of money and scrambling to re-plan their weddings, may be in Atlantic City, according to a lawyer for the man's wife.

Jackson Berson, owner of The Moveable Feast, the exclusive caterer for the Prospect Park Boathouse, vanished sometime in the past few weeks, upending wedding plans, and bewildering the lawyer in his ongoing divorce.

"Your honor, we’ve made several attempts to contact my client, but to no avail," Berson's lawyer Ilana Hochman said in a Brooklyn Supreme Court hearing this morning. "He seems to be missing. We don’t know where he is at this point."

Fighting back tears outside the court, Nancy Berson said that she last spoke to Jackson two weeks ago by text message, about their children. "It was fatherly duty stuff," she explained.

Nancy Berson filed for divorce last May, and though she said her two daughters don't know about the latest drama, "This has been going on for a long time. They don't expect much from him."

She said that she had no role in The Movable Feast, and Yacos said its demise is going to force her to move out of their home in Windsor Terrace.

“I have zero information regarding what happened," Nancy Berson said. "I have to start over. Everything is destroyed. I’m going to be in poverty."

Compounding her problems, an ex-employee of the catering company gave out her phone number, and she has been inundated with calls from disgruntled workers, she said.

"It started off the hook. It did slow down" to two or three calls a day, she said. "I have staff saying it’s cheaper to pay me than the legal fees. I try to help people as much as I can, but I can only do so much."

Regarding the many clients with huge holes in their wedding plans, she said, "It’s sad. I feel horrible for these people. It’s embarrassing."

Meanwhile, a rival catering company has taken over for some of Movable Feast's boathouse weddings, including two planned for this weekend.

Bon Soir Caterers owner Jeff Riley told Gothamist that his company hired staffers from The Movable Feast following Benson's disappearance, and is working on emergency menu planning for the couples with weddings planned through Berson at the boathouse on Saturday and Sunday.

Gothamist and DNAinfo have heard from six couples and counting who have weddings booked at the boathouse and are now missing deposits ranging from $8,000-$13,000. So far, the Prospect Park Alliance is not offering to reimburse the spurned spouses-to-be. Instead, it's suggesting that they take it up with their banks and credit card companies.

"As far as the money you paid to Movable Feast, you’ll have to work that out with them or your bank," the Alliance's rental director Christina Kuhn wrote to bride-in-waiting Amanda, who asked that we withhold her last name because of her work as a teacher. "Your contract was with that company. We do have the Boathouse reserved for August 5th. If you hire Bon Soir, they can work at the venue and the wedding can go on as planned." 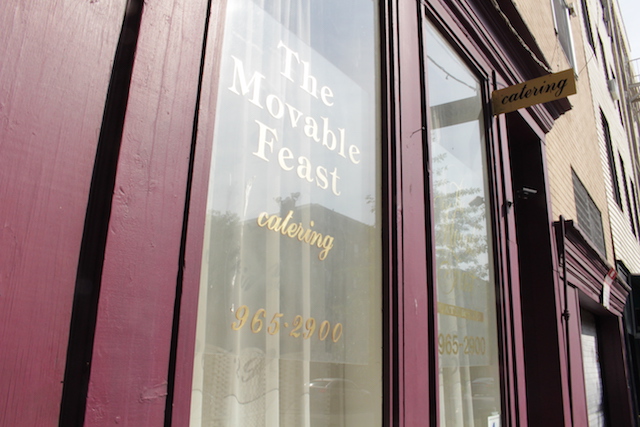 The curtains are drawn in the storefront that housed The Movable Feast, and old issues of the New York Times are piling up on its doorstep. (Nathan Tempey/Gothamist)

Couples we spoke to did not deal directly with Berson, but paper signs on his shuttered Windsor Terrace storefront direct all inquiries to him, and his disappearance seems to be at the center of the company's problems. Calls to phone numbers and emails for him and the company have not been returned, and on July 11th a Facebook friend wrote below an old photo of Berson, "Jackson where are you every one is looking for you my brother."

In addition to Bon Soir, other companies are seeking to step into the breach, offering up their services at a discount for couples in distress. Chef Michael Ayoub of the upscale Brooklyn pizza restaurant chain Fornino said that he would be willing to cater affected people's weddings at a discount of 10-20 percent of their lost deposit. Event and floral designer Lindsay Rae was one of a small army of wedding professionals who offered an all-inclusive wedding to a couple affected by the sudden closure of the Dumbo venue Rebar, occasioned by the disappearance of owner Jason Stevens.

"I hate that this happened, but the Brooklyn wedding industry is a close knit family that can come together and support it's community in moments like this," Rae wrote in an email, asking couples to get in touch. "Would be happy to use my resources to make their wedding day dreams come back to life!"

She would like to help connect couples with caterers, and offered a 15 percent discount for her day-of coordination services.

The Parks Department told Gothamist yesterday that the city doesn't have any contracts with Movable Feast. This is technically true, but in February the city's Franchise and Concession Review Committee approved the Prospect Park Alliance's license to run concessions in Prospect Park, which includes, among other things, the last year of a 10-year sub-license giving Movable Feast sole rights to cater weddings at the boathouse. The Picnic House, by contrast, has seven sub-licensees including Movable Feast, each approved for just a year.

Sub-licenses are supposed to be selected in a bidding process overseen by the Parks Department, and vendors are supposed to be subjected to background checks, according to the franchise committee document memorializing the Alliance's arrangement. A search of The City Record, where public records regarding contract bids appear, yields no results for The Movable Feast, but Alliance spokeswoman Deborah Kirschner wrote in an email that the company got a five-year contract in 2008 following "a competitive bid process" overseen by the Alliance. She continued, "Due to their successful track record, this was extended annually over the past five years. The Boathouse and Picnic House are different venues with different needs, and at the time of the RFP it was determined that one caterer was the best option for the Boathouse."

The Mayor's Office of Contract Services did not immediately respond to an inquiry about the contracting process.

The Movable Feast was co-founded by Berson's mother and a friend of hers more than 30 years ago, according to its website. It operates at several other venues around the city, including the Angel Orensanz Center on the Lower East Side.

Someone with the same name as Berson and a Brooklyn address filed for bankruptcy in 2000, court records show.