A Citi Bike docking station was smashed to bits in SoHo at some point this morning, apparently to send a message to Citigroup, the bike share system's corporate sponsor. Tipster Allan Molho tells us the kiosk, near Grand Street and Greene Street, was shattered and left with a sign taped to it blasting the bank for taking federal bailout money. "NO CITIGROUP AT ALL IN THIS NEIGHBORHOOD!" the notice screams. For good measure, there is also graffiti spelling out the word "DEMOILCRACY." Your move, Citigroup!

Neither the DOT nor Citi Bike reps immediately responded to requests for comment about the vandalism or our question about how common this sort of thing is. (When Citi Bike first launched, another tipster sent us a photo of a similarly shattered docking station.) The location of this kiosk is just blocks away from Petrosino Park, where local residents have protested bitterly (and filed a lawsuit) over one docking station. But so far their nude drawing demonstrations have failed to pressure the DOT to remove it. 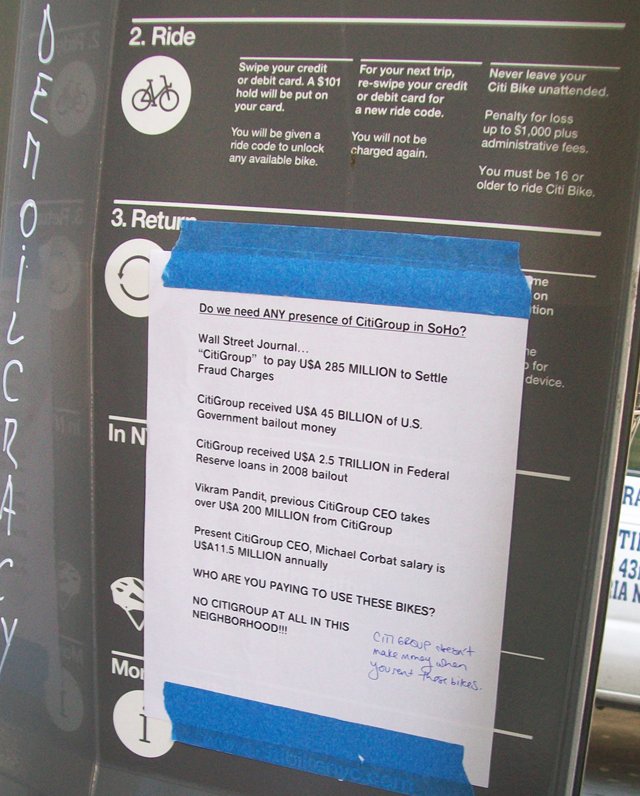 #bike share
#citi bike
#soho
#vandalism
#original
Do you know the scoop? Comment below or Send us a Tip