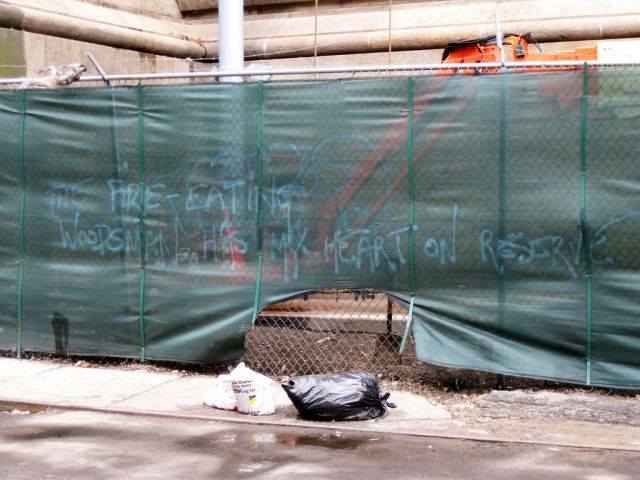 In a recent Guardian article the subject of the New York art world rejecting street art was touched upon, a topic that led to a bigger discussion on New Yorker's views on the medium.

One New Yorker, Council Member Peter Vallone Jr., has proposed a new bill which will attempt to do what decades of efforts has failed to do: abolish graffiti. The NY Sun notes that the "legislation would amend an earlier law sponsored by Mr. Vallone requiring commercial and residential building owners to either remove graffiti from their property or give the city permission to clean it up." The new bill, however, would require the construction site owners to pay out of pocket for the clean up efforts. From the press release:

Vallone's legislation effectively makes the owner of construction sites responsible for keeping their property graffiti-free. If graffiti is reported on their premises, the city can serve the owner with a notice requiring him to clean the graffiti or sign a waiver granting city workers permission to do so. If the owner fails to follow any of these provisions, this legislation gives the city the right to enter the premises and to remove or conceal the graffiti, with all costs to be reimbursed by the property owner.

This would put pressure on the owners to keep their sites free of graffiti; Vallone believes they are a target for taggers, saying, "In too many places, graffiti punks treat construction sites like their personal vandalism playgrounds." But especially with graffiti on the rise and seemingly unstoppable, what can the bill accomplish by punishing the site owners and not the taggers?

Vallone has a long anti-graffiti history, and in 2006 AnimalNYC targeted him by posting his address after "KIKO, a 28 year-old graffiti writer, was sentenced to 6 months in prison and forced to pay a $25,000 fine for his recent tagging spree in Astoria."

#bill
#construction sites
#graffiti
#peter vallone jr.
#proposal
#tag
#vallone
Do you know the scoop? Comment below or Send us a Tip