Vallone Says "No" to Stunts 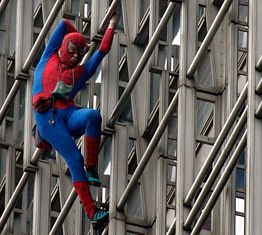 Queens Council Member Peter Vallone Jr. has introduced a bill that would have Evel Knievel rolling in his grave. If it becomes law, stunt men are going to have a tough time working on their craft in New York, as it would outlaw climbing and jumping off any structure taller than 25 feet; daredevils could get fined and spend up to a year in jail. Alain Robert is not going to be happy about this (video).

Vallone was inspired by the city's unsuccessful legal fight against "professional jumper" Jeb Corliss, who was last seen trying to parachute from the Empire State Building. After being caught, charges were dismissed by the judge who ruled Corliss was an expert and had taken the appropriate precautions.

The NY Sun reports that Vallone claims he is trying "to protect citizens from being landed on," (perhaps he should focus on construction site safety). Corliss's lawyer, on the other hand, claims his client is a skilled and trained athlete and a bill like this would be taking away his freedom of expression. No word on how the bill would affect the movie community (there is a new Bourne movie coming out, after all). And what if David Blaine has a climbing trick up his sleeve?

This wouldn't be the first time state has gone against stuntman, in 1971 the government wouldn't allow Evel Knievel jump over the Grand Canyon. His "plan B" was to jump from one skyscraper to another in New York City, which didn't happen either. However, The Sun reports that others have tempted fate by leaping from the city's skyscrapers. The most famous amongst them is parachutist Thor Axel Kappfjell who had jumped successfully from the Empire State Building, the Chrysler Building, and the World Trade Center (he ended up dying during a stunt in Norway).