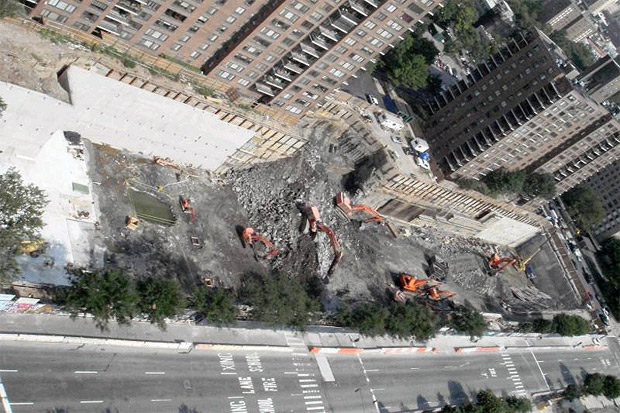 Seething over their many, ignored complaints about new construction at 808 Columbus Avenue, residents of Park West Village held a rally to demand an investigation. All 280 apartments at one Park West building, 784 Columbus, were evacuated when a retaining wall collapsed at the 808 site on Wednesday night. However, there were a number of calls to the Department of Buildings from 784 residents, complaining that the building was shaking as workers blasted in the 808 site.

Manhattan Borough President Scott Stringer asked that all construction projects at the site, which will include 220,000 square feet for retail as well as a 29-floor apartment tower, be stopped. The DOB has issued a stop work order for the site (though it is allowing "remedial work" to make the site safe) and said, "If the inspectors find problems, the construction jobs will be immediately stopped... The Buildings Department has been and will continue to address the community’s concerns regarding the new building project at 808 Columbus Avenue. Previous audits of the permit application have found plans for the new building comply with all building and zoning regulations. At the request of the community, Buildings experts are reviewing the permit application again to confirm it is compliant with all applicable building and zoning regulations."

Lois Hoffman, president of Park West Village Tenants’ Association, issued a statement; the full statement is after the jump, but here is an excerpt:

"This inexplicable construction failure is just a glaring symptom of the diseased real estate development process in New York City. Developers like Lawrence Gluck and Joseph Chetrit can safely ignore the community’s interest in the buildings they are putting up, because Mayor Bloomberg, Dan Doctoroff, Amanda Burden, the Department of Buildings, and other city agencies allow them to. There has been no regard for the community’s interest, and frankly, no regard for the potential tenants of the commercial space, or the eventual residents of the buildings under construction. We want this project to be entirely rethought from the perspective of sustainability, proportion, and place in the neighborhood.

The Daily News has an editorial about the collapse. Back in May, the News found that there are many buildings with "cracked walls and shifting foundations" around the city, "thanks to work crews carelessly blasting and digging next door to occupied buildings whose residents have little trust that the city is protecting them." The News says that the DOB's 17 inspectors are not enough, given the amount of city-wide construction there is, and wonders if the DOB needs to rethink how it organizes complaints on its site; for instance, you can see violations by building site, but not by contractors.

Photograph of the site, taken on Thursday, directly across 97th Street at 65 West 96th Street, by Irving Polsky

“We want to thank Scott Stringer for taking a step toward returning sanity to this project today. If this development is completed as envisioned by Gluck and Chetrit, it will cut a well-planned, successful neighborhood in half with the second-longest, unbroken street wall along any avenue in Manhattan, and introduce other problems into the lives of thousands of area residents. Everything is off kilter – the scale of the development, the architecture, the marketing practices to potential commercial tenants, the disruptive manner and shoddy nature of the construction, the threat of exhaust pollution from the new building’s parking garage aimed right at nearby buildings, traffic and safety issues including a planned commercial loading berth putting 60-foot semis on 97th St. These mistakes will also hurt the commercial tenants who have already signed on, like Whole Foods, because they will be the public face of these problems for the local residents who are their potential customers.

“The mayor’s PLANYC 2030 for the future of New York says nothing about the relationship between planning, design and sustainability of communities. For the sake of all New York City residents, we call on Mayor Bloomberg, Dan Doctoroff and Amanda Burden to step in now and to start ensuring a meaningful planning process for so-called ‘as-of-right’ construction. Otherwise, this lack of meaningful planning will continue to crop up all over the city and will define our future.”