UWS Parents Push Back Against Rezoning That Would Integrate Schools

"The community here is like this: If you're not rich, you get treated like shit," said Tanya Bailey, sitting in a folding auditorium chair at PS 191 on the Upper West Side. Her son is a 4th grader at the elementary school on West 61st Street, a few blocks west of Columbus Circle and across the street from the NYCHA-run Amsterdam Houses.

For Bailey, living in the neighborhood of Trump Place and public housing complexes, where new luxury high-rises line the Hudson River and the median rent in 2014 was $14,000/month, PS 191 has been an equalizing force.

"Here I've seen teachers who don't care if you're rich or not. You're still a child and you need to learn the alphabet. That's one thing I love about this school."

PS 191 is one of three schools currently under consideration for Department of Education rezoning, which the DOE hopes will address the severe overcrowding at neighboring PS 199.

Situated nine blocks from 191 on West 70th Street, PS 199 is one of the highest-performing schools in the city. It also enrolls 912 students, in a building with capacity for 738. Incoming 2015 kindergarteners vying for seats at PS 199 this fall faced the longest waiting list in the city, in excess of 100 students.

Similar to a contentious rezoning proposal for elementary schools in Downtown Brooklyn, sending families from 199's zone to 191 would force integration across racial and socioeconomic lines.

PS 191 was also recently slapped with a contested "persistently dangerous" classification, inspiring many anxious PS 199 parents to come out in force on Wednesday night for a face-to-face meeting with NYC Schools Chancellor Carmen Fariña. Sporting bright yellow "PS 199" name tags, they filled the majority of the auditorium seats at PS 191.

The zoning plan, subject to a vote by the Community Education Council for Manhattan's District 3 next month, would shave eleven square blocks off of 199's zone as early as next school year. A portion of those blocks would rezone incoming kindergarten families to PS 452 on 77th Street—a school demographically similar to PS 199. The rest would go to PS 191, which would form a shared district with a new school, PS 342, slated for completion in 2018. 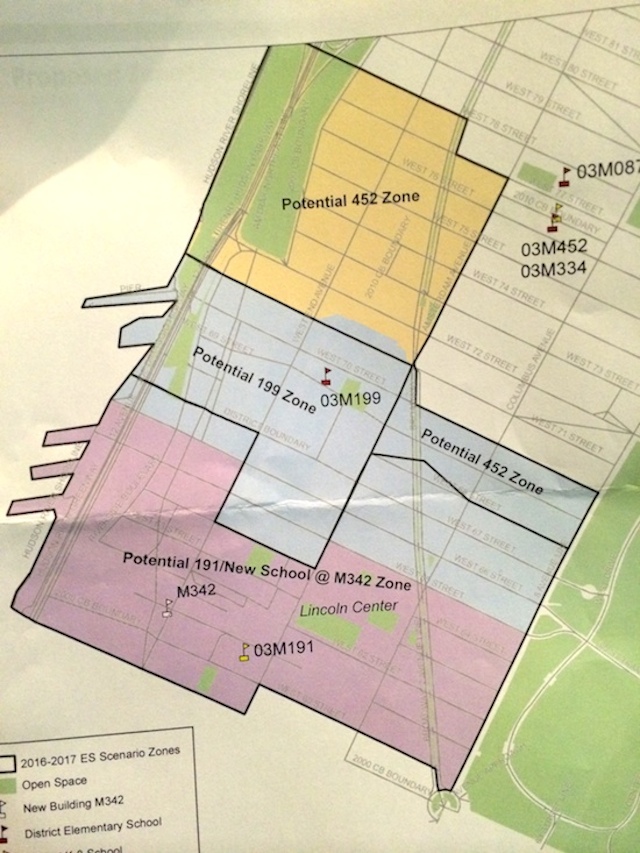 "Neighborhoods are by their nature segregated," said Chancellor Fariña, addressing the crowd on Wednesday. "It's a problem. There's not an easy answer. But none of this is done on purpose and we're not going to continue it on purpose."

Many parents and administrators from PS 191 have spoken in their school's defense in recent months, arguing that the "persistently dangerous" ranking is the product of faulty data collection during a transition year between principals.

School Board Member Noah Gotbaum chided the city for the ranking last month, describing minor incidents like a child being hit with a foam ball qualifying as an assault.

While incident reports for the 2014-2015 school year have yet to be released by the city, DNAInfo analyzed 2013-2014 reports. The number of "violent and disruptive incidents" jumped from 56 to 97 that year; there were 6 alleged minor altercations with "weapons," and 42 without; a school with 60 or more such incidents on record is deemed "persistently dangerous."

Addressing parents from both schools on Wednesday, Fariña acknowledged that "some of these statistics are done in very strange ways."

Under the No Child Left Behind act, no student is required to attend a persistently dangerous school [PDS]. Fariña says that the DOE has sent counselors to the school in hopes of lifting the designation for the next school year.

Still, PS 191 would be PDS-free by August 2016 at the earliest—not soon enough for some skeptical parents of incoming kindergarteners.

"It is what it is," PS 191 PTA President Kajsa Reaves said of her school's scarlet letter. "I don't think we're more violent than any other schools. If you walk around in our school you will see that it's certainly not dangerous. Come visit our school, instead of assuming."

Reaves would rather talk about PS 191's merits: manageable class sizes, a popular dance teacher trained at nearby Alvin Ailey, and a new multimedia lab stocked with video and music production equipment. 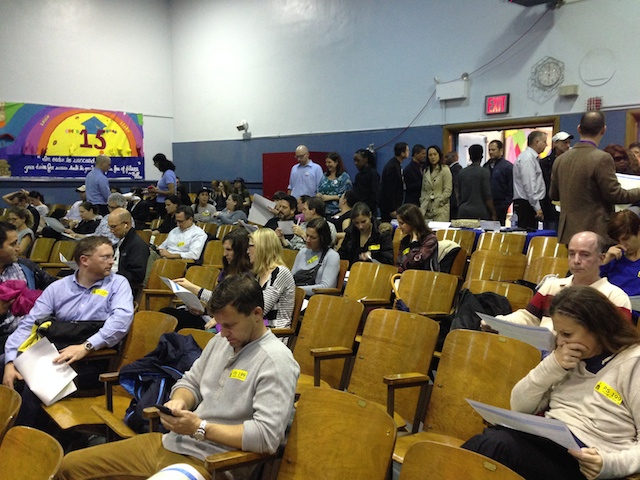 PS 199 parents, sporting yellow name tags, made up the majority of the audience at last night's meeting (Emma Whitford/Gothamist)

"Any family that I know that has kids at PS 191 does not feel that the school is unsafe," said Andrea Steinkamp, co-PTA president of PS 199. "Unfortunately the school has a perception issue, and perception is reality."

"Families don't want to gamble with their kids," she added. "And when you look online and see that a school is ranked persistently dangerous and only 10% of its students passing exams, that's a big risk. Right now all the DOE is saying is 'just trust us.'"

PS 199's PTA has numbers and money. Thanks in large part to 140 parent volunteers, the group's annual walkathon earlier this month raised about $50,000 for the school. Fourth graders take a class with National Dance Institute instructors, and 3rd, 4th and 5th graders take music composition with members of the New York Philharmonic. The PTA also pays for a chef who comes in once a month to help cafeteria staff to develop a healthy lunch menu.

Reaves, 191's PTA president, ran down a list of her group's more modest efforts. She's helping organize the PTA's first bake sale for this coming Friday, as well as a Halloween parade for the students. Reaves says her first priority is to fund a much-needed renovation of the school library. "I think maybe the culture of our parent body is more that you send your kids to school and that's it," she said. "Most of them are not that financially strong so they can't contribute."

"I just got my working papers," said Bailey. "Some of the other parents are working or going to school at night. It's not easy to get out to the meetings."

"I absolutely think it would invigorate the PTA to rezone," said Reaves. "We [the PTA] think we need a rezoning for our school to develop."

But other PS 191 parents and community members were skeptical, saying that the DOE has failed to explain how the rezoning will impact their students.

"The way telephone is played, parents think they want to take our kids, get our kids out of the building, and move rich white children into the building," said Polonia Lopez, an Amsterdam Houses resident whose three children attended PS 191.

"What they really need to do is build another school here, which they should have done first before they built the high-rises," said Nannette Thomas, a longtime Amsterdam Houses resident.

"The city has allowed three new high rise apartments, all between 36 and 50 stories, to proceed within line of site of PS 199," echoed CEC President Joe Fiordaliso, to a round of applause. "They are literally casting a shadow on the school as we speak."

Towards the end of last night's meeting, a portion of PS 191's choir filed onto the stage to sing for the assembled parents, many of whom crowded forward with iPads and smartphones. We're all the same, under a different name, they sang. We're all blood brothers.

Afterwards, filing out of the auditorium, Lopez said that she was glad she had stuck the meeting out. "There were people who I thought would be opposed to us, but they were sharing some of the same concerns we have about these developments coming up, and overcrowding," she said.

But Ken Jewell, the parent of a PS 199 kindergartener, said the meeting had done little to alleviate his concerns.

"I am troubled by the fact that the DOE is saying these issues of violence are not what they seem to be," he said. "Why would the state's Department of Education put itself out on a limb by identifying the school as persistently dangerous?"

Jewell added, "Even if you dump several families from 199 [into 191], does that guarantee that the percentage of parents that are here are now are suddenly going to get involved in the school?"

"We need to make sure zones reflect the population in a community and to the greatest extent possible the diversity of our City," said Department of Education spokeswoman Devora Kaye in a statement. "In District 3, having long wait-lists means inevitable uncertainty for many families, and we intend to reduce that uncertainty and help strengthen both school communities."

#inequality crisis
#PS 191
#PS 199
#school integration
#school segregation
#Upper West Side
#original
Do you know the scoop? Comment below or Send us a Tip