Dozens of Upper West Side parents gathered in a stuffy school auditorium on West 77th Street on Monday night to testify against a new proposal to transplant their children's cramped elementary school, PS 452, sixteen blocks south to a larger campus adjacent to public housing. Many said that they had purchased homes in the West 70s so that their children could walk to a high-performing neighborhood school, and described the proposal as an insurmountable inconvenience and an affront to their investment.

"You vastly underestimated the massive life and financial choices we made to attend this school," parent Jessica Weinberg told Department of Education officials, adding that she felt "blindsided."

"We almost never have to leave [the West 70s], nor do we want to," added the parent of a prospective kindergartener, who asked that his name be withheld for professional reasons. "It's full of young families and playgrounds and kid-friendly restaurants. It's one of the few parts of the city that feels like a good place to raise kids."

"Many of our friends and peers leave when they have kids," he added. "They bail on the city. We felt like we were in a place where we were safe."

The current PS 452 campus is within walking distance of Central Park and the Museum of Natural History. It is also less racially and socioeconomically diverse than the rest of the city—64% of the current student body is white, and only 11% of students qualify for free lunch. The larger campus, currently home to PS 191, stands across the street from the NYCHA-run Amsterdam Houses on 61st Street. (Under the plan, PS 191 may relocate to a new school within a luxury residential high-rise in the 60s called the Riverside Center; PS 191 parents did not attend last night's meeting, but principal Lauren Keville endorsed the plan to the NY Times, citing "exciting new technology and expansive resources.")

The city's Office of District Planning (ODP) argued on Monday that rezoning is inevitable, due to an influx of high-rise development in the southern portion of Manhattan's District 3. PS 452 opened in 2010 to take pressure off nearby PS 87 and PS 199, among the city's most coveted public schools. It currently shares facilities with two middle schools, and has no dedicated auditorium, library, cafeteria or courtyard. As more students come into the zone, the art and music rooms will likely be converted into classrooms.

The move downtown—which wouldn't go into effect until 2018—has the full support of PS 452 Principal David Parker and his teachers, who say they feel cramped and harried on 77th Street. At the larger school, they'd be able to dedicate bathrooms to the youngest students; gym class wouldn't be shoved into a corner. "We would never participate in a process where we thought harm would happen to children," Parker said on Monday.

But some parents countered that the DOE is using them to appease PS 199 families who recently squashed a proposal that would have moved some PS 199 students to PS 191. "It feels like 199 successfully resisted change, so now they [the DOE] are going to try to do an end-run," said the prospective kindergarten parent.

"Asking 452 to rezone and re-site is asking our parents to shoulder the burden of the entire district," said parent Michael McCarthy, to a round of applause. "Do not make us the district sacrificial lamb." 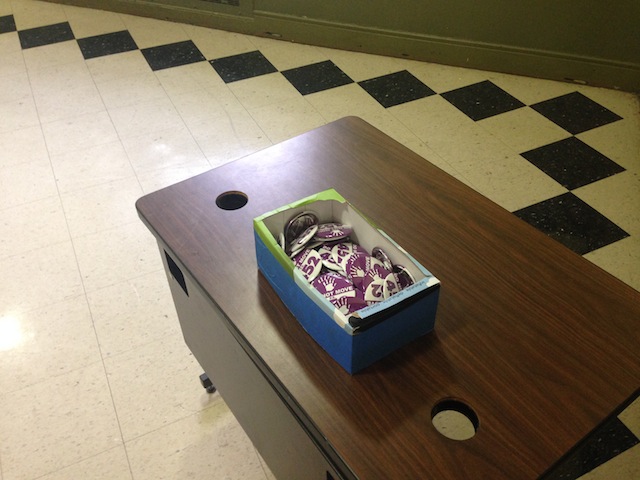 Most parents wore purple buttons announcing their opposition to the plan (Emma Whitford/Gothamist).

"We would have a more diverse population [if we moved]," said a kindergarten and fourth grade parent, one of a handful to support the move on Monday. "This is especially important in a city that is less than 50% white."

On the heels of a similarly-contentious rezoning decision in downtown Brooklyn, others stumbled on the subject of integration, broaching it only with the assurance of anonymity.

"You know we're primarily a white school," one parent said, before backpedaling. "I don't know if I would use that word exactly."

"There aren't a lot of African Americans who live on the Upper West Side," added another parent, who asked that her name be withheld because she was an attorney who works with the city. "We were sad to learn that, you know? I would like more diversity, but we chose to move to this place because we put the quality of the education at a higher value."

"We didn't say, 'Oh we want to go to a white school.' That's a stupid statement," scoffed parent Robin Krugman, who is white. "If I needed to just have this," she added, gesturing to her face, "then I'd move to, I don't know, Iowa or Oklahoma."

Still, Krugman expressed concern that PS 191 was recently designated as a "persistently dangerous" school—a label its parents and teachers have contested.

As an alternative, several parents suggested that the DOE build a new school in the 60s to accommodate all of the new high-rises, or help reverse segregation by bringing minority children into PS 452—subjecting families to the same out-of-zone commute that they themselves won't stomach. "If they are trying to spread kids from the Amsterdam Houses to other schools, be explicit," said the prospective kindergarten parent. "Send them to different schools."

"Anyone who thinks it's about race or about class is just wrong," the attorney parent argued. "For most of us, I mean. I have no problem if they want to make the school bigger, but do it here."

A fourth-grade parent who lives on 103rd Street dismissed concerns about the lengthy commute. "Listening to so much disturbance about family life because of this 15 minutes added [to the commute] is a little bit pathetic," she said, speaking on the condition of anonymity. "It's totally idyllic to walk 5 minutes [to school] if you are lucky, but I think the benefits of the new space outweigh all these inconveniences."

But most parents maintained that the move would be too much of a blow. "I think a lot of parents would put their children in private school," predicted Bennett.

"You take the school away, then what? Then you think maybe it really isn't worth living here anymore," Krugman added. "If we don't want to go to 61st street, what happens to us?"

The DOE is expected to present formal proposals for school swapping and rezoning within District 3 this fall. Next Monday, a second meeting on the PS 452 swap will take place at PS 191.

Update: A quote above from Robin Krugman has been expanded to include her statement that the concern about sex offenders was in reference to an anonymous question submitted at Monday's meeting by another parent.