With a pilot plan to desegregate middle schools in Harlem and the Upper West Side due in just a few weeks—and fresh off a viral video that focused nationwide attention on some UWS families' impassioned opposition to that initiative—local parents had another opportunity to voice concerns and support for the new admissions policy during a Community Education Council hearing on Tuesday night.

Held at P.S. 163, the meeting was focused on the not-quite-finalized plans to prioritize setting aside seats for "underperforming" students in all of District 3's 16 middle schools. The proposal is supposed to be in place by the end of the school year on June 26th, according to Superintendent Ilene Altschul.

According to the DOE, simulations showed that the outcomes of all three scenarios would be similar, resulting in a net increase in families receiving a match to a more preferred school. The agency estimates that about 5 percent of applicants would not receive a match to any school they ranked on their application—around 100 students in total, or roughly 20 more than did not receive any matches in last year's 6th grade application process.

One simulation, Chalkbeat reports, "shows that many schools with lower test scores would remain essentially unchanged. P.S. 149 Sojourner Truth, a K-8 school, would actually get more low performing and poor students, according to an education department proposal — from 68 percent of students to 70 percent. Community Action school would go from having 64 percent poor and struggling students, to 63 percent." 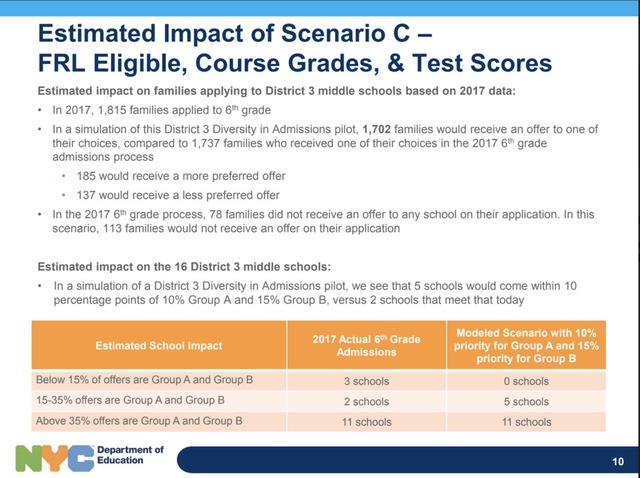 The estimated impact of the third scenario, which was publicly shared with parents for the first time last night (DOE)

While principals from five different middle schools expressed support for the various iterations of the plan, reactions among parents were decidedly more mixed.

"To some extent these programs will make groups more heterogenous, and I don't know if that's necessarily good," he added. "I'm not sure that's going to help kids."

Studies have shown that racial diversity in school is a benefit to students, and others have found that academic diversity in a classroom can be advantageous as well. As Amy Wells, a professor of sociology and education at Columbia Teachers College, told Gothamist earlier this month, "There's a lot of research that shows that the higher achieving kids, when they are in a more integrated space, are not negatively impacted."

Still, Conkey's concerns were echoed by several others in the room, some of whom also alluded to the "YouTube incident" and blamed the media for inflaming tensions in the district.

"I don't think people who maintain a skeptical view should be derided on their face," said Jerome Kramer, co-president of the PTA at Booker T. Washington. "There's an equivalency problem between skepticism and being opposed to the noble causes we're trying to achieve. I think we really need to be able to focus on good changes, not simply changes."

Others in the room, meanwhile, lamented the quarrelsome nature of the many public meetings—this was the 26th on the issue—and called on the city to take a stronger leadership role in pushing through more ambitious integration initiatives. "I can tell that we're going to be here again next year," said Lucas Liu, the treasurer of the Community Education Council's board. "There's going to be more heated debate, more anxiety, and more frustration. I guess I'm looking for something bolder."

Genisha Metcalf, an adjunct professor at Fordham University and member of the Community Education Council, pointed out that the plan does nothing to improve resources to any of the district's five lowest performing schools, all of which are in Harlem. "I get this specific meeting is about middle school admissions, but a lot of the issues we're raising are rooted in the fact that we still have not addressed parts of our district," she said, to thunderous applause. "That's all of our problem."

Despite the general anxiety about the plan from some parents and feeling that it doesn't go far enough among others, many in attendance Tuesday were largely in favor of the three implementation scenarios put forth by the DOE.

"I've listened to the concerns of parents, and I think to not do anything would be a tremendous error on our part," Charles DeBerry, a principal at P.S. 76 in Harlem, told the crowd, after explaining that he attended one of the first integrated schools in North Carolina. "I don't think we have the perfect plan—there are pieces that need to be worked out—but if we continue to try to find a perfect plan, we'll never get anywhere."

#community education council
#desegregating schools
#district 3
#diversity
#harlem
#schools
#uws
#original
Do you know the scoop? Comment below or Send us a Tip