Last night, a mother returning home to her Upper West Side apartment found two of her children stabbed multiple times in the bathroom—and their nanny on the floor with apparently self-inflicted stab wounds. The children, Lucia Krim, 6, and Leo Krim, 2, died at St. Luke's Hospital, while the nanny, Yoselyn Ortega, 50, is in critical condition at Weill Cornell Medical Center. NYPD spokesman Paul Browne said, "It’s about the worst thing you can hear or imagine." 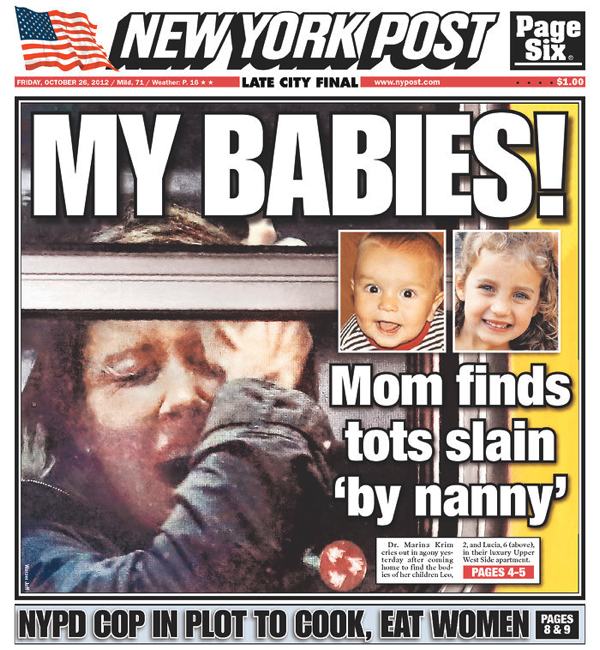 Police Commissioner Ray Kelly said last night that Marina Krim had taken her three-year-old daughter Nessie to swimming class and then returned home to 57 West 75th Street, a luxury apartment building: "She goes downstairs to the lobby, assuming the nanny may have gone out with the children. She asks the doorman if in fact they have gone out, and he says 'No.' She goes back up, the apartment is dark, and she goes into the bathroom."

Lucianne Minihan, whose husband is the building's super, told DNAinfo that Krim was screaming from her second-floor apartment, "The whole building heard it. She was screaming at the top of her lungs. She was screaming, 'Help me! Help me!'" Other neighbors said the screams could be heard half a block away.

Minihan's husband went to the apartment; DNAinfo reports that he "saw blood everywhere... He heard a strange grunting noise, looked through a bedroom doorway, and saw the nanny stabbing herself and trying to choke herself with a cloth, Minihan said. [He] ran out of the apartment, closed the front door and yelled at his neighbors to call the police. He held the door closed until police came, Minihan said." Another resident on the floor told the Times, "There were bloodcurdling screams from a woman and man’s screaming" and believed that the super was saying, "You slit her throat! You slit her throat!"

A neighbor who saw Marina Krim said to the News, "She was mumbling words, incoherent. I can’t imagine experiencing something like this." The shocked mother was holding her daughter and was given a sedative. Her husband, Kevin, had been traveling (he is the head of CNBC Digital); according to the Times, "Mr. Krim was told of the situation hours later, when he landed after a flight back to the city. He was met at the airport by the police, who told him what happened and took him to see his wife at St. Luke’s Hospital, where the couple remained on Thursday night, along with Ms. Krim’s sister." 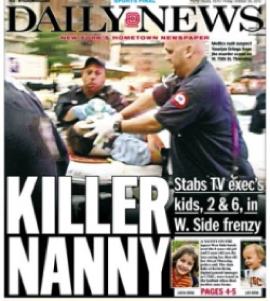 Police have not charged Ortega yet; Commissioner Kelly said the investigation was continuing. It's unclear when Ortega started working for the Krims, but the Daily News noted that the family apparently visited her family in the Dominican Republican in February. Ortega's niece told the Post, "This is just shocking. She loved those kids. I don’t know what would make her do this," but said she seemed to be acting nervously lately.

The Krims had moved from San Francisco to NYC in recent years, and Leo, who turned two on September 30, was the first Krim born in New York City. Marina Krim documented her growing family's life on a blog, noting things like, "One of the best parts of my day is after I drop both girls off at school and have 3 precious hours with little Lito all to myself. Ok, I'm near getting cheesy I adore this boy so much!!!" and "Lulu is off to her first sleepover tonight -- it's totally spur of the moment, she has no clothes, or toothbrush or really, any preparation whatsoever! I hope she makes it through the night."

Hours before the shocking murder, Marina Krim observed, "Leo speaks in the most adorable way possible. Firstly, he speaks super clearly, so you can understand every word is he is saying. And he does things like, '(I) want a fresh bagel' and 'Dito (what he calls himself) wants cold milk' and most adorable of all, 'No thank you' - he never uses 'No' alone, it's always paired with 'thank you'."