Kaci Hickox, the nurse who had been in contact with Ebola patients in West Africa and became the first person to be placed under mandatory quarantine in NJ last week, has been allowed to return home to Maine after railing against the conditions of her confinement. She has shown no symptoms nor tested positive for Ebola during her whole ordeal, and yet she's had to deal with panic and criticism wherever she's gone thanks in large part to politicians who were unable or unwilling to listen to the council of health care specialists. Hickox may have left the city, but the fear surrounding her non-infection is still lingering here—and it's now infecting the life of her lawyer, Norman Siegel.

The Post reports today that Siegel, who previously represented Gothamist in their case to obtain NYPD-issued press credentials, is facing blowback from his association with Hickox at his local gym, of all places. Apparently, two gym members at the Equinox at Columbus Avenue & 67th Street were loudly arguing and nearly got into a fist fight over whether Siegel should be allowed into the gym.

A source told the Post that one person yelled, "They should ban Siegel! He’s with that Ebola nurse," and, "I’m going to tell the managers not to let Siegel in" because he could "sweat" on the workout equipment. THe other man responded, "You are a f-king moron!" The Post's source added, "Then they started arguing about whether Siegel would come in. It looked like it was going to break into a physical fight, then finally they walked away from each other."

Siegel told us he only found out about the altercation, which took place Friday morning around 6:30 a.m., when the Post reporter called him that afternoon. He said that he's a regular at the club, and often chitchats with other members and gives out free legal advice, but has only been once since he started representing Hickox. Either way, it shouldn't matter at all: "This is what I've been dealing with all week: misinformation and fear that's out there," he said. "[Hickox] has no symptoms, therefore she can't infect other people...What I've learnt over the years is you have to show empathy for people who aren't informed correctly. You don't call people names because you disagree with them, you try to persuade them." 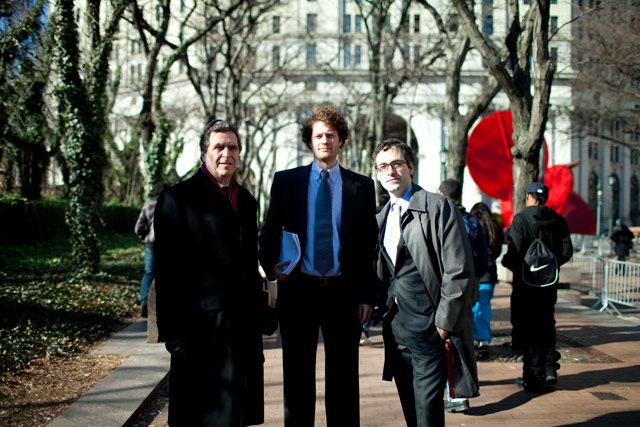 Siegel places much of the blame on politicians like Gov. Chris Christie and Gov. Andrew Cuomo for how poorly they've handled the situation, going back and forth with rhetoric that has veered toward the apocalyptic: "If they want to quarantine anyone, quarantine the politicians. Because they're pandering and misinforming their constituents."

He added that he's also received hate mail for associating with Hickox: "One guy called me a monster, another called me a douchebag and said my kids should go stay in the tent with her. It's not pleasant, but it's not the first time I've gotten hate mail."

Siegel foremost wants to make sure people aren't wantonly panicking because of bad governing. But he also doesn't want to lose his gym membership. "Someone at the gym doesn't want me there, where does that come from? Are we at that point in our country?" he asked. "If I knew who the guy was [who complained], I would say to him, 'Hey, let's go out to bar and get a drink and talk this thing through.'"

#ebola
#ebola panic
#kaci hickox
#norman siegel
#uws
#original
Do you know the scoop? Comment below or Send us a Tip