Yesterday, a christening ceremony was held in a Louisiana for the latest naval ship bearing the name USS New York. While there have been five other ships with the same name, this "amphibious transport dock ship" was named to honor the state after September 11.

In 2002, Governor Pataki asked then Secretary of the Navy (now Deputy Secretary of Defense) Gordon England to name a warship USS New York, in spite of the present practice of using state names for submarines. England approved the request, noting, "From the war for independence through the war on terrorism, which we wage today, the courage and heroism of the people of New York has been an inspiration." 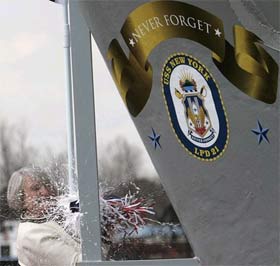 The 684 feet long and 105 feet wide ship, constructed by Northrup Grumman, was built with 7.5 tons of steel from WTC wreckage. Deputy Secretary Gordon's wife Dotty sponsored the ship and christened it with a champagne bottle. Members of the NYPD and FDNY were present for the christening; police lieutenant Matt Murphy told the AP, tears welling up, "It's a fantastic day. Sometimes you think you're over something, and then you realize you're not completely."

September 11th Families' Association president Lee Ielpi (his firefighter son died at the WTC) said, "This ship, as it cuts through the water, is going to send a ripple. That ripple will say, 'We cherish our freedom.'" Representative Vito Fossella spoke more aggressively, "If the USS New York has to follow Osama bin Laden to the gates of hell, PCO Jones and his crew...[you] have my full support," to a standing ovation.

The ship will officially be commissioned in September 2009 in NYC. Learn more about the USS New York at its website.