The United States Men's National Team learned their fate for the 2014 FIFA World Cup in Brazil—and it was about as bad as it could possibly be. The drawing ceremony in Brazil placed the team in Group G, which means the USMNT will face Germany, Ghana, and Portugal in the group stage, in what will undoubtedly be one of the roughest paths to the Group of 16.

Despite being ranked 14th in the FIFA World Cup rankings, the US team is essentially the underdog in the group, given the strength of the opposition. "It's about as tough as it gets," midfielder Kyle Beckerman told us at a draw event in Kansas City.

Their first group match will be against Ghana, on Monday June 14, 2014, in Arena das Dunas in Natal. The US has been stung twice by Ghana in the last two World Cups, being eliminated by them in the Round of 16 in 2010 and their last group stage match in 2006. Ghana also get a footnote for eliminating Egypt—who were coached by former USMNT coach Bob Bradley—during qualification, adding to the degree of revenge that some US soccer fans wish to extract on the Black Stars. 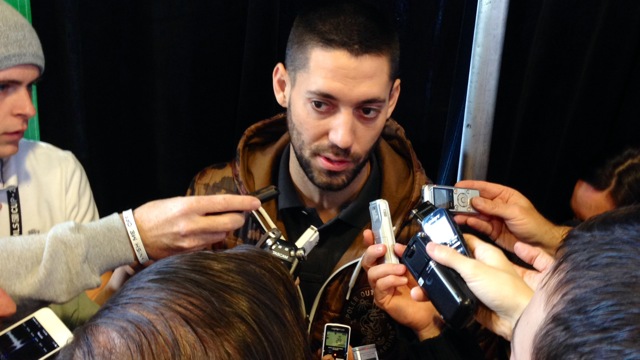 Clint Dempsey speaks to the media after the World Cup draw in Kansas City. (Pablo Maurer/Gothamist)

Asked if revenge was on the mind for the US, forward Clint Dempsey smiled. "Seems like that's been the case. The past two World Cups—maybe it's an opportunity to get them back for that. We're due a win."

On June 22nd, the US will travel to Manaus to battle Cristiano Ronaldo and Portugal. The last time they faced in the World Cup, it was in the 2002 Group Stage South Korea, where the US shocked Portugal 3-2. But the X-factor will be Ronaldo, who practically carried Portugal through qualification and is unquestionably one of the best players in the world. He will give the US defensive line a very tough test.

"You want to play against the best. Obviously, [Ronaldo]'s the best," reflected USMNT defender Brad Evans. "Certainly if i happen to be there, it'd be a great challenge, great opportunity. stick to your guns and do the best you can."

Fellow defender Matt Besler also seemed eager to face the Real Madrid superstar. "Personally? He's arguably the best player in the world, so it's gonna be an exciting matchup."

A quick turnaround will see the US will close the group stage just 4 days later, squaring off against the group's top seed, Germany. Ranked second in the world, the three-time Champions knocked the US out of the 2002 World Cup in the Quarterfinals. Jurgen Klinsmann will dominate the story here, having won a World Cup with Germany in 1990 and coaching their national team from 2004-2006.

The US and Germany did face earlier this year, with a 4-3 US win at RFK Stadium. Although Germany had played a team of reserves, Besler said there were some small takeaways from that friendly victory. "I think that we can gain confidence from it. I think that's pretty much it. it's gonna be a different game, different team, but I think from a lot of the friendlies that we've played over the past 12 months, they've been difficult opponents and the reason that we play those games is to build our confidence and experience for the World Cup." 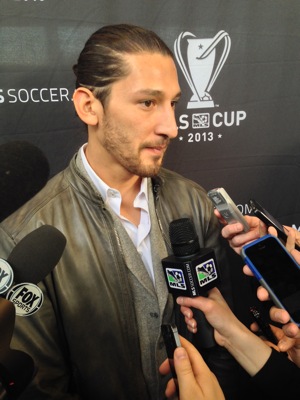 If the opposition wasn't bad enough, the travel schedule makes it worse. With stadiums for the event scattered across Brazil's massive geography and schedules uneven, the US will face the worst travel distance of any World Cup team, with Sports Illustrated's Grant Wahl clocking it at 8,866 miles.

Beckerman believed that the schedule and travel challenges could actually play to the US's advantages. "The thing with European teams underperforming—I think they're getting a lot better at playing in hot temperatures. There may be some advantages if we play a European team in a hotter climate, or if we can play Ghana in a colder climate-but either way it's going to be tough."

Despite the difficulty of the group, the US players we spoke to were upbeat and excited for the challenge. "This is excitement. That's what the World Cup is about - it's about playing the best teams," said Dempsey. "We have a good group as far as that's concerned. If we play our best ball, we can get out of the group. We have to get the most out of every game, not wait until that last game. At the same time, looking at that group, we think it's gonna go down to the last game."

Evans pointed to the lack of an "easy team" as a benefit, not a hinderance: "I actually think it's better that it's all tough teams. There are no easy points to be had, and I think that will be valuable come the third game. If teams keep knocking each other off, it's one of those groups where anything can happen. For us, we've got goals to advance and that will remain no matter the group is"

And Beckerman didn't seem to mind being labeled underdogs. "You're going to face tough teams in the group, you're going to face tough teams if you get out of the group. No reason why we can't get out...I guess you would say that we're underdogs for sure, and that's I think not a bad place to be. It's really exciting, really. Any player would want to play against these teams in the greatest stage there is. No reason to fear it."

Other nations from CONCACAF, the soccer federation covering North and Central America, also found out their fates. Mexico was put into Group A, with Croatia, Cameroon, and hosts Brazil. Costa Rica drew Group D, and will face off against Uruguay, England, and Italy. Honduras found their way into the "Group Of Life", Group E, along with Switzerland, Ecuador, and France.

#brazil 2014
#group of death
#soccer
#USMNT
#world cup
#original
Do you know the scoop? Comment below or Send us a Tip