US Vs. Soccer: Feds Raid FIFA, Charging 9 Officials With Corruption And Racketeering

Earlier today, a number of officials for the world soccer organization, FIFA, were arrested in Zurich, Switzerland, as U.S. Attorney General Loretta Lynch is accusing them as well as marketing executives at corporations of "rampant, systemic, and deep-rooted" corruption.

The indictment alleges that, between 1991 and the present, the defendants and their co-conspirators corrupted the enterprise by engaging in various criminal activities, including fraud, bribery and money laundering. Two generations of soccer officials abused their positions of trust for personal gain, frequently through an alliance with unscrupulous sports marketing executives who shut out competitors and kept highly lucrative contracts for themselves through the systematic payment of bribes and kickbacks. All told, the soccer officials are charged with conspiring to solicit and receive well over $150 million in bribes and kickbacks in exchange for their official support of the sports marketing executives who agreed to make the unlawful payments.

Most of the schemes alleged in the indictment relate to the solicitation and receipt of bribes and kickbacks by soccer officials from sports marketing executives in connection with the commercialization of the media and marketing rights associated with various soccer matches and tournaments, including FIFA World Cup qualifiers in the CONCACAF region, the CONCACAF Gold Cup, the CONCACAF Champions League, the jointly organized CONMEBOL/CONCACAF Copa América Centenario, the CONMEBOL Copa América, the CONMEBOL Copa Libertadores and the Copa do Brasil, which is organized by the Brazilian national soccer federation (CBF). Other alleged schemes relate to the payment and receipt of bribes and kickbacks in connection with the sponsorship of CBF by a major U.S. sportswear company, the selection of the host country for the 2010 World Cup and the 2011 FIFA presidential election.

It was a pretty crazy scene at the hotel where the raids took place. Here's how the NY Times described it:

As leaders of FIFA, soccer’s global governing body, gathered for their annual meeting, more than a dozen plain-clothed Swiss law enforcement officials arrived unannounced at the Baur au Lac hotel, an elegant five-star property with views of the Alps and Lake Zurich. They went to the front desk to get room numbers and then proceeded upstairs.

Times reporter Michael S. Schmidt is at the hotel and Tweeted some details, too.

Swiss law enforcement getting room numbers for FIFA execs they are heading upstairs to arrest pic.twitter.com/F69djqpcu5

Authorities on a budget stay in the two-star hotel they found on Trip Advisor. So they enjoy this kind of raid. pic.twitter.com/2dOEyPVWed

at least two spouses of fifa executives who were arrested huddled together at the hotel. one woman was crying. they watched presser together

FIFA officials were escorted out behind sheets at the Baur au Lac hotel in Zurich http://t.co/1U9kXrhjzK pic.twitter.com/lrl40M5m1o

The U.S.'s case stretches from 1991 to present, and the Swiss authorities—FIFA is headquartered in Zurich—are investigating the 2018 and 2022 World Cup bids, which were given to Russia and Qatar respectively. The Swiss government said it seized "proceedings, electronic data and documents" at FIFA's office today.

The U.S.'s case has Brooklyn roots; from the Wall Street Journal:

Brooklyn prosecutors and agents in the FBI’s New York field office have been investigating FIFA for years, according to people familiar with the matter. Investigators reached a turning point in their probe in 2011 when an American member of the FIFA Executive Committee, Charles “Chuck” Blazer, began cooperating with them, one of the people said. Mr. Blazer, a Queens, N.Y., native, began providing FBI agents with information about alleged fraud and money laundering within FIFA’s ranks, according to the person.

FIFA delegates will soon meet to a elect a new president. But what looks like a democratic process isn't without criticism. WSJ's Jonathan Clegg reports. Photo: Getty
Mr. Blazer, who from 1990 to 2011 was the general secretary of Concacaf, agreed to record conversations with other FIFA executives after authorities threatened to bring tax evasion charges against him, the person said.

Mr. Blazer is gravely ill and couldn’t be reached for comment.

Blazer was the subject of a 2014 Buzzfeed article: "Perhaps it took a man like Chuck Blazer to help yank U.S. soccer out of its dark ages. Maybe only someone as canny, ambitious, and ruthlessly self-serving as he could successfully navigate the ugly side of the beautiful game." 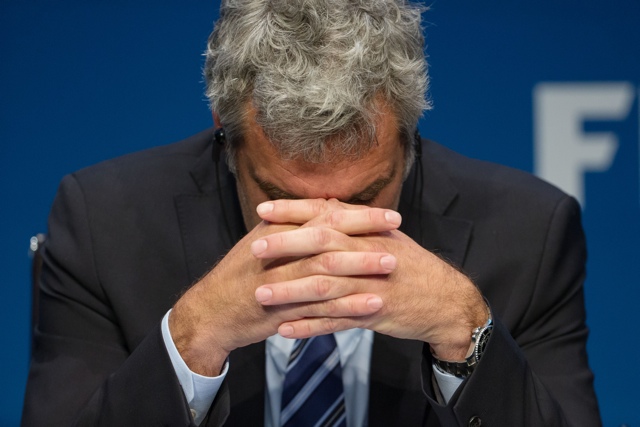 FIFA president Sepp Blatter, who was not charged, hasn't commented, but FIFA spokesman Walter de Gregorio said he was "not a happy man today... He’s not dancing in his office. He’s just very calm, he sees what happens, he has fully cooperated with everybody."

Gothamist's resident soccer expert Dan Dickinson says, "Basically, it's been a long time coming, and the only shocking thing here is the timing—the FIFA elections were scheduled for Friday, and because FIFA seems to believe that no scandal can actually topple it, they're planning on continuing it."

Blatter is expected to be re-elected. His rival, Prince Ali Bin al-Hussein of Jordan, only commented at the raid and arrests were "a sad day for football".

The Times says that Blatter is "generally recognized as the most powerful person in sport... Blatter has for years acted as a de facto head of state. Politicians, star players, national soccer officials and global corporations that want their brands attached to the sport have long genuflected before him."

But the BBC reports, "One Swiss newspaper jokingly called him 'the dark prince of football, the godfather, Don Blatterone' - but no inquiry has ever revealed proof of his involvement in corruption. 'He's a survivor,' says one member of parliament, Roland Buechel. 'Nothing ever sticks to him; there is always someone between him and the bribes.'"

Lynch, who will be holding a press conference at 10:30 a.m., said the corruption "has profoundly harmed a multitude of victims, from the youth leagues and developing countries that should benefit from the revenue generated by the commercial rights these organizations hold, to the fans at home and throughout the world whose support for the game makes those rights valuable."

#corruption
#fifa
#football mafia
#racketeering
#Sepp Blatter
#soccer
#world cup
Do you know the scoop? Comment below or Send us a Tip