U.S. Open Not a Foregone Conclusion 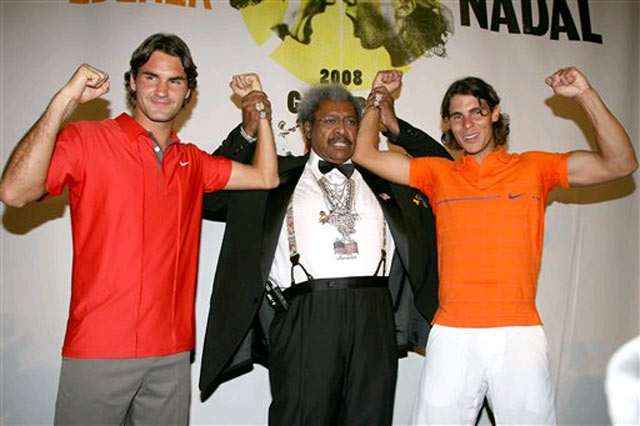 Photograph, above, of Roger Federer, Don King, and Rafael Nadal at the promotional "Grapple in the Apple" promotional event last week from AP/Starpix; photograph, below, of Jelena Jankovic at a U.S. Open press conference by Peter Kramer/AP

Roger Federer has won the last four U.S. Open titles, but he won't be the favorite when the tournament starts today at 11 a.m. at the USTA National Tennis Center in Flushing. That honor will go to Rafael Nadal, the new world No. 1 and winner of the French Open, Wimbledon and the Olympics this summer. Federer, 27, has looked mortal or worse this season, and Nadal, 22, has peaked while displaying an all-surface versatility that had eluded him in previous summers. For the first time since the 2004 Australian Open, Federer will not be the top seed at a Grand Slam event. 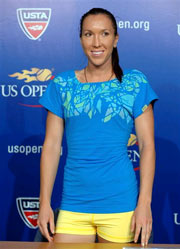 Can Federer still win the tournament? Obviously. He hasn't missed a Grand Slam semifinal since the 2004 French Open and shouldn't be tested during the early rounds. But he is on the same half of the draw as Novak Djokovic, the third seed and last year's runner-up. But Nadal, who in the past has looked fatigued entering the U.S. Open after the grueling hardcourt season, is in fine form and will be difficult to stop.

The women's side is less compelling. The last three champions (Justine Henin, Maria Sharapova and Kim Clijsters) are not in the field thanks to injury or retirement. The Williams sisters are in the same quarter of the draw. That portion is in a half with world No. 1 Ana Ivanovic and Dinara Safina, who could be having the best summer of any player. Such imbalance isn't going to make the tournament exciting. Jelena Jankovic, the world No. 2, has never won a Grand Slam. She has a favorable draw in the bottom half and could make a run to her first major final.

Here are the men's and women's draws. TV coverage is mostly on USA, with some weekend coverage on CBS. And for tickets, you could try the US Open site or Craigslist.