In their penultimate game before the World Cup, the US Men's National Team battled Turkey on Sunday afternoon in front of a sold out crowd of 26,762 at Red Bull Arena. The 2-1 result went in favor of the Yanks, but the performance did little to reassure fans over Jurgen Klinsman's inexperienced defensive lineup.

Fabian Johnson's goal. The opening goal came from the unlikely foot of right back Fabian Johnson. Pushing up into the attack, Johnson played the ball to midfielder Michael Bradley then made a run toward the box. Bradley calmly lofted the ball over a Turkish defender into Johnson's path, who took a perfect one time shot to the far post. It was Johnson's first goal for the USA in 21 appearances.

Jozy Altidore. By the metric most strikers are judged - goals - Jozy Altidore is failing to do his job. But there is still value in other contributions, and Jozy's hold-up play as the target striker was exemplary. He shrugged off defenders, dished the ball to teammates, and kept Turkey's back line occupied for the full 90 minutes. Even if he's not scoring, he's contributing. 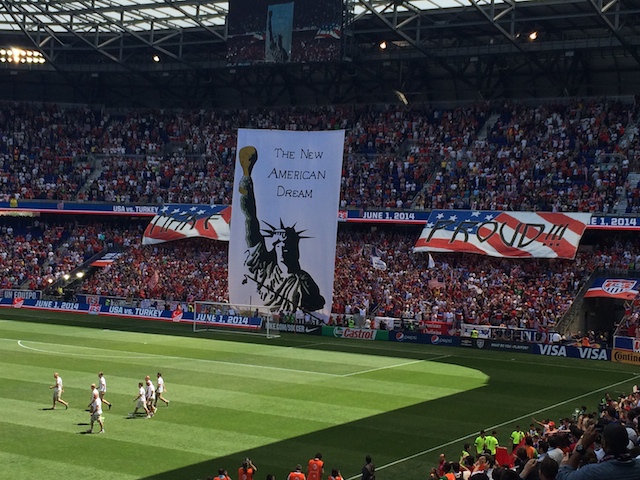 The atmosphere. The last time the US Men came to Red Bull Arena, the friendly with Ecuador felt like an away game. No such showing from the scattered Turkish fans: the energetic Harrison crowd was clearly in favor of the home squad. Area supporters were in full voice, and a tifo display showed the Statue of Liberty lifting the World Cup (or a piece of fried chicken?) next to the words "The New American Dream".

Defense not closing down space. We get that it's a warm up, and we get that this is still the time to tweak the lineup. But no combination of defenders seem to be preventing attacks on the US goal. With wide open passing lanes and lax defensive pressure, Turkey outshot the US 20 to 8. It was only thanks to Turkey's lack of finishing that the US were saved from a harsher score line. They'll need to tighten up, because Germany and Portugal will not be afraid to exploit them during the group stage.

Clint Dempsey's game winning goal. Ugly goals still count just as much as pretty goals! Dempsey's game-winning goal was a gift thanks to a completely botched clearance by Turkey. Dempsey barely had to touch the ball to earn his first international goal of 2014. Don't expect Ghana, Portugal, or Germany to give them away that easy come the World Cup.

The US Men leave the NYC area this afternoon to head to Florida. Their final friendly, a Saturday match in Jacksonville against Nigeria (6PM, ESPN2), will serve two key purposes. It will start to acclimate players to a more tropical climate, and give the USMNT an opponent with a similar style to Ghana, their first World Cup opponent.