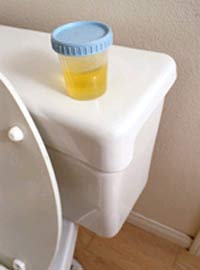 We're sure that one Long Island father thought to himself, "If I can't use my for a urine test, I'll use my child's urine..." when he decided to take his 9-year-old out of school. The problem is, Suffolk police officers happened to be passing by the deli where the 36-year-old father and son were and became suspicious when they saw "the child fixing his pants and watched as the father poured something from a coffee cup." Even better, when questioned, the child told the cops that his dad pulled him out of school to pee in the cup.

The father was applying for a job with a trucking company and needed to pass the drug test. Unsurprisingly, Newsday reports the police also found a marijuana pipe and pot in the man's car. The man was charged with child endangerment and marijuana possession; he was also told by the judge not to go anywhere near his son.

The criminal complaint also explained how the man was going to use his son's urine: He was going to pour the urine from the coffee cup into a condom and use that during the test.

#childendangerment
#children
#coffee
#crime
#drugtest
#If I
#long island
#longisland
#marijuana
#news
#police
#stupid
#The Police
#urine
Do you know the scoop? Comment below or Send us a Tip