This advertisement for an Urban Outfitters store opening tomorrow among the antique shops and Middle Eastern markets of Atlantic Avenue, in Brooklyn, is rather befuddling. 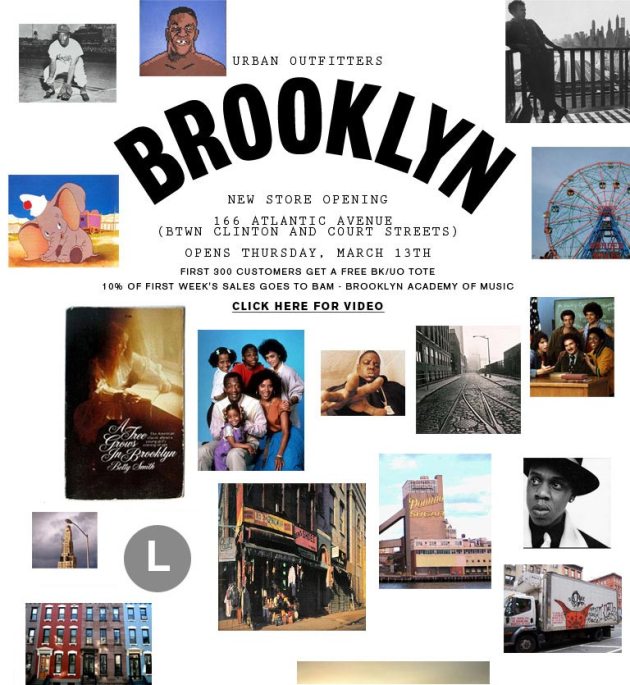 The mystifying amalgam of images, placed in some sort of elementary collage layout is presumably a representation of the borough. Many of the images look like they were cut out of a TV Guide circa 1984, and others, like the shot of Jay-Z has us wondering about legal repercussions. Or is Jay-Z the new face of Urban Outfitters? By the way, what's Hova looking at? It would make sense to have his gaze fall reverently on Biggie, but it appears he actually has his eye on Lisa Bonet.

The L-train logo is especially perplexing. Sure the L line reaches all the way out to Canarsie, but um... hate to tell you this guys, it doesn't go anywhere near this part of Atlantic Avenue. There is a stop near the Domino Sugar Factory however, which you've got pictured here. But you won't find any Urban Outfitters over there. Not yet anyway. And as reader points out, the cover of the Beastie Boys' Paul's Boutique album doesn't make sense, since that was shot on Rivington in the Lower East Side - in Manhattan - unless they wanted to draw on No Sleep Till Brooklyn cred.

[Via Sam Horine - thank you]