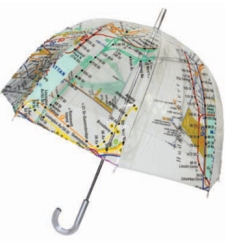 This afternoon's rain will continue into the evening, as some areas are being warned about the storms. New Jersey is supposed to have heavy thunderstorms, a tornado warning was issued, then canceled, for Nassau County, and an urban flood warning was issued for Bronx, Brooklyn, Manhattan and Queens until 7PM!

There was a "ground stop" on arriving flights at Newark and LaGuardia, and delays range from 3 to 4 hours at the three area airports.

Some showers are expected tomorrow morning, but it'll get sunnier. Overall, Friday will be a lot cooler, with a high of 64 and low of 49. Saturday will feel more like autumn.

Good luck with your commutes! The LIRR has temporarily suspended service in both directions through Valley Stream due to a lightning strike affecting the LIRR's signal system. Oh, and there's an accident investigation at West 72nd and Broadway, per the MTA:

Also, selected Wakefield-bound 2 trains are running on 5 line from the Nevins Street Station to the 149th Street-Grand Concourse Station.

According to the Gothamist Newsmap, there was a "fatal person under the train."