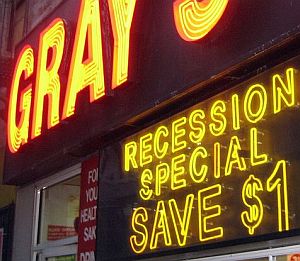 Today the Post looks at how the turbulent economy is affecting the lifestyle of one family of four on the Upper East Side, and, surprise surprise, reports that it’s not really such a big deal for some people. Sure, their cost of living expenses have risen by $1,000 a month compared to this time last year, but Mr. and Mrs. Gary Foodim aren’t sweating it – they vacationed at Disney World last year and there's no way the recession is going to stop this year's trip.

"Prices in restaurants have definitely gone up, but we still need to keep up with our friends," Foodim tells the Post – he dropped $871 in April to keep up with the Joneses on dining out and entertainment, a 46% rise from last year. They’re also spending more on dry cleaning and Fresh Direct ($890 last month) – but some of the food increase can be blamed on the growing appetites of their daughters, ages four and two. At the end of the day, Foodim “loves living in the city, so this is reality.”

Part of that harsh reality not covered in the article is the city’s obscene rents, but the tabloid is also reporting that rents may possibly be going down a bit. Overall, rents prices have been constant or higher than last year, but some brokers are saying that April was a particularly slow month, and average rents in some neighborhoods are now substantially less than this time last year: The average SoHo studio dropped from $2,455 to $1,855, while average rents for two-bedrooms on the Lower East Side are down to $3,403 from $4,144. Woah – only $1,855 for a studio? With a couple of roommates and some well-placed bookcases, even SoHo's becoming affordable!