A 19-year-old man was killed and his 17-year-old brother was seriously injured when they were allegedly beaten by their parents, half-sister and three other members of an upstate New York church. Authorities say that the two were beaten for hours "in the hopes that each would confess to prior sins and ask for forgiveness."

Lucas Leonard, 19, was brought to a hospital on Monday, where he was pronounced dead. The NY Times reports that his "injuries, believed to be inflicted with the suspects’ hands and feet, were severe enough that the hospital initially told law enforcement officials on Monday that they believed he had been shot." After law enforcement realized that the assault took place at the Word of Life Church in New Hartford, near Utica, NY, the church was "surrounded by special operations teams from state and local police agencies." And, while authorities were searching, 17-year-old Christopher Leonard was discovered on the second floor, suffering from severe wounds inflicted from a beating. 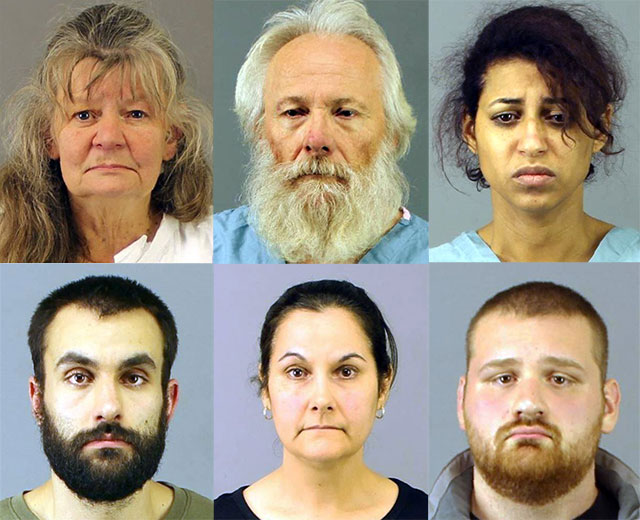 The two brothers were apparently targeted with punches and kicks to their stomachs, genitals, backs and thighs. New Hartford Police Chief MIchael Inserra said that Lucas Leonard was beaten by his parents, Deborah and Bruce Leonard, while Christopher Leonard was beaten by Linda Morey, Joseph Irwin, David Morey and Sarah Ferguson, who is the half-sister of the brothers. Inserra said, "We have not determined what the punishment was for at this point," and the Post-Standard reports, "Police found no evidence to support rumors that the brothers were molesting children."

The Word of Life Church operated in an old elementary school in New Hartford. One resident, Eva Monaghan, told the Times, "Around town, it's considered a cult," while another said she "most often only sees church members at night, sometimes at 3 a.m., and she hears chants emanating from the building," according to Syracuse.com.

Tara Litz, who once lived next to the church, explained, "I never really had any ill problems with them, but I did see a lot of sketchy things regarding stuff in my backyard, weird hours of the night, weird chanting, humming." And Connie Toukatly, who resides across the street, said in the Times, "Everybody in the whole town always said there’s something strange going on there; everybody felt that way. But it’s so sad that it came to this point."

The building was a place of worship, as well as a home to some of the members. Irwin lived there, and his mother, Traci Irwin, is reportedly the "Mother" of the group. A textile inside the building reads, "We have been commissioned through the written word of God to reach out to those who have not experienced the love of Jesus Christ in their lives ... Through the systematic training up of saints, our goal is for them to reach out confidently, sharing the love and compassion of Jesus Christ..."

Neighbors recalled the Leonard children: "Deborah stayed home to school the kids, [Roberta] Humble and fellow neighbor James Constantine said. The family would never celebrate Christmas and holed themselves inside a pitch-black house during Halloween, they said. The youngest, a boy who is around about age 10, told them that 'Christmas was bad,' they said." Humble said she used to gie them some video cassettes of children's programming, but wouldn't watch them, "They would not let them watch Mickey Mouse. They said Mickey Mouse was queer, because he never married Minnie Mouse."

#church
#cult
#fatal beating
#upstate
#word of life
Do you know the scoop? Comment below or Send us a Tip