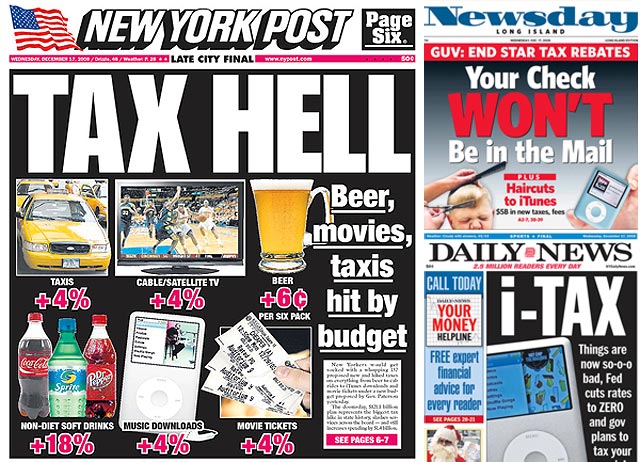 Governor David Paterson's budget proposal that includes a big cut to education funding and a variety of taxes and fees gets worked over. The Daily News, which called it a "slash-and-burn budget," points out, "The proposal, which needs legislative approval, did not include broad-based income tax increases, but relied on smaller ones"—specifically 137—"to raise $4.1 billion from cash-strapped New Yorkers." The head of the State Conservative Party, Michael Long, said of things like reinstating the sales tax on clothing under $110 and taxing spirits, wine and regular soda, "You're sending notice to the people of New York that we really don't want you here. The governor proposed flat spending, but why not actually cut the budget before raising taxes and fees?"

The Empire Center for New York State Policy's E.J. McMahon tells Politicker NY, "Nothing gets the couch potatoes off the couch like taxing their TV. he thing about those tax increases is, the irony of nuisance tax stuff that, is that economically they're utterly insignificant. Politically, obviously there's nothing worse. There are people who wouldn't blink at a massive confiscatory tax on business, but eighteen cents on a bottle of soda and they go nuts." And the Post's Albany bureau chief Frederic Dicker was unimpressed with the "lack of creativity in Paterson's proposal - no significant work-force downsizing, no real lifting of regulatory burdens" and with Paterson's delivery:

Whereas Cuomo, a national-class orator, inspired the state to tighten its belt and fork over more taxes as it faced a calamitous economic down turn in the early 1990s, Paterson delivered a flat and sometimes awkward budget presentation.

"So I want us to be optimistic," Paterson declared at one point. "I think we can come back to Albany, we can take responsibility, we can take control of this budget, we can take over 'Saturday Night Live.' "

Take over "Saturday Night Live"? Paterson appeared with that odd observation to be more focused on the nasty and embarrassing portrayal of him on NBC than he was on the state's dire financial straits.

And Mayor Bloomberg said that more city layoffs might be on the way, since NYC could lose up to $1 billion in the governor's proposal.