An Upper West Side community board has approved a plan to install a northbound protected bike lane along Central Park West, voting overwhelmingly in favor of the proposal on Tuesday night despite the furious protests of a some local residents.

The new bike lane will stretch from 59th Street to 110th Street and will be separated from traffic by plastic bollards and a seven foot buffer. The redesign, which Community Board 7 approved by a 27-7 margin, also includes signal timers for pedestrians, a ban on left turns into the park at 96th Street, and the elimination 400 parking spaces. 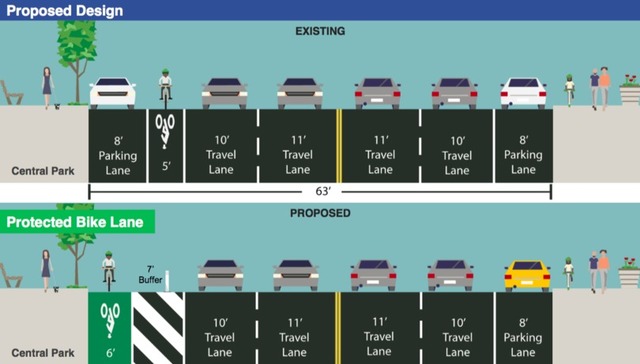 While advocates had initially called for a two-way protected lane along the park, city officials said last month that it would be "psychologically unrealistic" to expect motorists to go along with such plans.

Still, approval of the one-way lane was hailed as a victory by safe streets advocates and many Upper West Siders, who'd mounted an impassioned campaign for the protected bike path following 23-year-old Madison Lyden's death last summer. The Australian tourist was fatally struck by a drunk driver, after she was forced out of the current unprotected lane by an illegally stopped livery cab.

"To remove car storage in favor of cyclists' lives feels great," Nevona Friedman, a 25-year-old resident of Central Park West, told Gothamist on Wednesday. "Given the amount of cyclist deaths this week, this is a win."

Nearly 10 months ago @CB7Manhattan asked for a protected CPW bike lane study. I’m happy (and relieved) that tonight the proposal passed+ @NYC_DOT will start installing it this year! Thanks to everyone who supported it @HelenRosenthal @NYCSpeakerCoJo @TransAlt https://t.co/up8xOYCwVn

In response to a "surge" in cyclist fatalities—including three in the span of a week—Mayor Bill de Blasio has pledged to unveil a new bike safety plan (though one that does change streets too much), alongside a limited enforcement push targeting reckless drivers.

Studies have shown that injuries to cyclists, pedestrians, and drivers all drop after a protected bike lane is installed. Central Park West has long been one of Manhattan's most dangerous corridors: according to city data, at least a dozen cyclists and pedestrians were killed or severely injured on the street between 2013 and 2018.

Another resident from CPW, "for 52 years" says that "they fought really hard in 70’s and 80’s for parking. It was the worst time". You heard it here, the worst time in NYC during that time was in the UWS due to lack of parking.

Not that the community board meeting was not without the standard driver-centric fireworks. West Side Rag described a scene ripe with "angry outbursts, constant interruptions, boos and jubilation." CB7 Chairperson Roberta Semer called it "the rudest meeting I have ever presided over."

"There were very few people against the bike lane, they were just loud," noted Friedman. "It was chaos, just screaming mad people who were against it. The guy behind us kept shouting: 'What about the environmental studies!?'"

It didn't help, she added, that the board allotted half the speaking time to residents who opposed the bike lane—despite the fact that they were far outnumbered by supporters, according to Friedman.

Safe streets advocates, as well as Brooklyn Councilmember Antonio Reynoso, have argued that the boards should no longer have an advisory role on bike lane implementation.

Asked whether Reynoso's idea might be included in de Blasio's pledge to "speed up and intensify everything we're doing" on Vision Zero, a mayoral spokesperson was noncommittal. "We believe that substantial community outreach and communication can help improve our Vision Zero work," he said. "But we have moved forward with critical safety projects even with local opposition."

#bike lane
#bikenyc
#central park west
#community board
#cpw
#Upper West Side
#vision zero
#we the commuters
Do you know the scoop? Comment below or Send us a Tip