We suppose there are worse places on your body to find a rat when you wake up, but this is certainly horrifying enough. According to a lawsuit filed against her landlord, Upper West Side resident Lidia Cuevas awoke with a rat on her chest one memorable June night in 2012. The rodent's presence caused her to fall out of bed, resulting in a serious knee injury that's given her "permanent pain, suffering, and inconvenience," the lawsuit alleges. She also injured her neck, because life is just one goddamn thing after another. 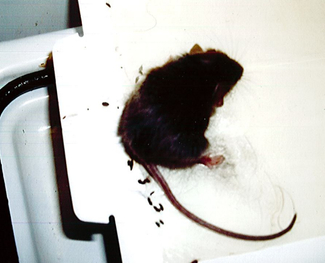 This rat never had the chance to snuggle with Cuevas. (Dinerman Bergam & Dinerman, LLP)

The lawsuit alleges that Cuevas's rent-stabilized apartment, located at 249 West 109th Street, was infested with rodents thanks to the landlord's failure to plug numerous holes in the walls and ceilings. There was even a hole in the bedroom ceiling, and the lawsuit suggests that's how the rat in question came to appear on Cuevas's chest that night. As a result of her fall, Cuevas has had to undergo surgical arthroscopy of the left knee with partial medial meniscectomy and chondroplasty medial femoral condyle. Whatever that means, it doesn't sound pleasant.

According to Cuevas's attorney Mary Bergam, Cuevas has been living under these deplorable conditions for years. And after demanding repairs, her landlord, Harry Tawil, and the building's management company took her to court, alleging that she was responsible for the apartment's disrepair and had made excessive complaints to the Housing Department. That lawsuit was dismissed by a Housing Court Judge in February.

Cuevas's lawsuit seeks unspecified damages from Tawil and the management company, Beacon 109 245-251 LLC. Tawil did not respond to our request for comment.

For further reading on where rats can be found in your apartment, here's the classic tale of a toilet bowl rat.

#harlem
#lawsuits
#manhattan
#original
Do you know the scoop? Comment below or Send us a Tip