Upper West Side Uproar As City Tries To Diversify Schools

Angry Upper West Side parents screamed on the local news, the new schools chancellor made a controversial tweet, and last night Mayor Bill de Blasio approved of the “robust discussion” surrounding a pilot plan to desegregate some of the whitest schools in New York City.

“I understand any parent who says, ‘I had my heart set on a certain school for my kid or a lot of my kid’s classmates are going there, I want maximum opportunity to go there.’ That’s very human. That’s very natural,” de Blasio said of the plan, which would prioritize admissions in the District 3 middle schools that perform the best on state standardized tests in math and English, for a percentage of students who score in the lower two quartiles of the tests.

“At the same time a lot of people are rightfully saying we need to find ways to diversify our schools. We have to strike a balance and then at the same time create more good options, right?”

At a meeting to discuss the initiative last Tuesday at P.S. 199, which is 62 percent white and 4 percent black, parents complained that by turning children with higher test scores away from their first-choice schools, the DOE would be sending the message that “life sucks.”

The NY1 clip made the rounds, and Chancellor Robert Carranza tweeted Raw Story’s blunt assessment of the footage:

(Carranza later apologized for tweeting “language was automatically generated...I would not have said it that way,” but the tweet itself remains.)

NY1 reported that the initiative has the support of nearly all of the principals and parent leaders in the district, and the Department of Education has stressed that the plan doesn’t change the existing system of parent choice, but just adds another weight to the admissions process.

“No, I actually think having higher—the highest performing kids, mixed with other kids with other abilities lifts all boats,” de Blasio responded.

This is true, according to Amy Wells, a professor of sociology and education at Columbia Teachers College.

“There’s a lot of research that shows that the higher achieving kids, when they are in a more integrated space, are not negatively impacted,” Wells told Gothamist.

Wells said that an overreliance on state test scores as a measure of educational quality has made some parents “blind” to other measures of success.

“This isn’t really the parents’ fault, the system has put so much weight on those scores that they come to signify something so much bigger than they are. And they blind parents to what their kids can learn from being in classrooms and schools with children who have different backgrounds and experiences than theirs,” Wells said. 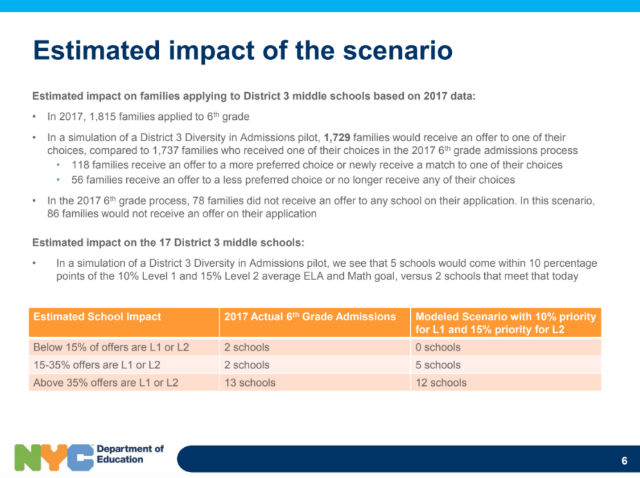 A slide from the DOE's presentation on the plan.

Jason Abramson, a parent with three children in District 3 elementary schools who attended last week’s meeting, told Gothamist that “diversity is certainly a worthy goal and I think I would love for my own kids to have more diversity in their schools than they currently have.”

“But I think the issue though is what’s currently being proposed is not just diversity, what’s being proposed is that they’re going to set floors,” Abramson said. “By DOE’s own estimates, you’re gonna have 60 to 100 kids that are currently at that [higher performing] school, who are going to be displaced and are going to have nowhere to go in the zone, because the other 13 schools right now are all failing.”

The DOE points to schools in the district like P.S. 421, which may underperform on state tests, but receive high marks in overall student achievement. The school is 58 percent Black, and 36 percent Hispanic.

“There’s certainly kids in there that are doing well, and even the kids who may be below grade level, I’m not saying they’re doomed for a life of failure,” Abramson said. “But if you look at the whole school at these [test] percentages, they’re failing schools.”

Abramson said he believes the DOE should either expand the top four performing schools to make way for the lower-performing students, or place the students who would be moving from those four schools to just one or two schools, “so when they come to these schools they can at least go with 30 or 40 other students at once, and then you have a critical mass of kids and that could make a real difference.” 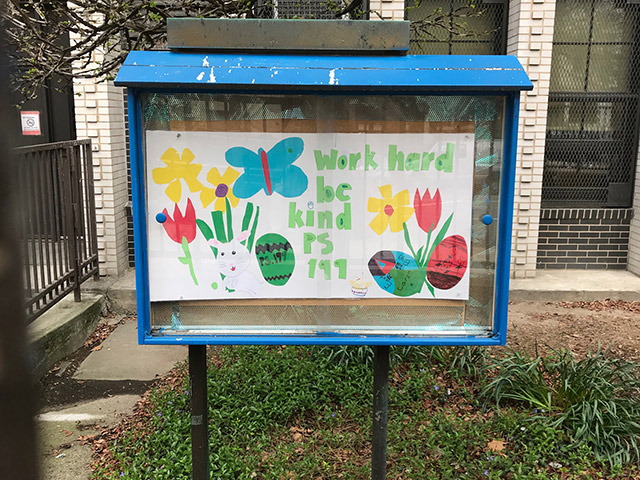 The DOE says that the plan would affect 5th graders this fall who are applying for middle school in 2019, and that the conversation will continue through June. District 3’s Community Education Council has scheduled a meeting for May 22 to discuss the proposal.

“I think there’s a norm in white America right now to be really fixated on what you’re losing, without questioning your own privilege to begin with, and I say that as a white woman,” Wells said. “But then I think we cover it in the media in a very superficial way, that fuels this anger and frustration and doesn’t really get to the core of the problem, which is that test scores are really not the best way to measure kids’ ability and intelligence to begin with, and they’re highly correlated with race and class.”

Wells noted that she also recently had a child in District 3 middle schools who tested well but wasn’t in any gifted and talented program. Her message to some of these parents who are opposing the changes: “It is okay, they’ll be okay, they’ll do well!”

Our colleagues at WNYC have a whole lot more on desegregating New York City schools here.

#desegregating schools
#diversity
#schools
#Upper West Side
#original
Do you know the scoop? Comment below or Send us a Tip