As the Prospect Park West bike lane war drags into its sixth year, another bike battle is brewing, this time on the Upper East Side. Back in November, Community Board 8, which comprises the Upper East Side and Roosevelt Island, submitted a request to the Department of Transportation asking for more crosstown bike lanes, as they currently only exist on East 90th and 91st Streets. But when DOT responded to this request by presenting plans for six new crosstown lanes, they were roundly denounced, and now the board's transportation committee has sent DOT back to the drawing board, declaring that those six lanes just won't do, Streetsblog reports.

The proposed bike lanes would run on 67th, 68th, 77th, 78th, 84th, and 85th streets, from Central Park to the East River. In its proposal, DOT notes that there are currently very few dedicated bike lanes in the neighborhood, and suggests the six lanes in part because of the connections they could provide to parks, subway stations, and the Upper East Side's new Citi Bike locations. Some neighborhood groups wanted DOT to consider a lane on 72nd Street, which would have linked up with the two-way bike path that goes through Central Park, but that option was ruled out after after 612 locals signed a petition against it.

The lanes would be painted, not protected or separate from traffic, and their implementation would not take away any parking or travel lane space, according to DOT. Nonetheless, some Upper East Siders fear the lanes will flood the streets with cyclists and put locals in danger. 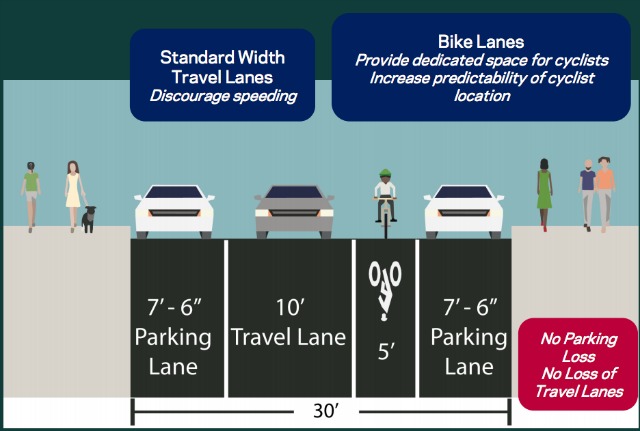 The proposed design for the crosstown lanes. (NYC DOT)

According to NYPD crash data, there were 34 injuries or fatalities on those streets in 2015, four of which involved cyclists. Of those four, none involved pedestrians, as the collision was between a cyclist and a motor vehicle.

But never mind that: there were two hours' worth of public comments last night, many against the proposed lanes, with locals arguing that they'd take up parking spots (which DOT said they won't) and endanger patients and staff at Memorial Sloan Kettering Cancer Center and students at St. Ignatius Loyola (which DOT said has not been a problem with other bike lanes).

According to Hindy Schachter, a cyclist who lives in the neighborhood and was one of the few to speak at last night's meeting in favor of the proposed bike lanes, many people also complained that the proposed streets have lots of speeding cars, which they're concerned will be exacerbated by the addition of bike lanes.

"The fact is people are cycling all over the city—they always have and they always will," Schachter told Gothamist. "The question is, how safe will that cycling experience be? If you come to me and say 67th has speeding cars, you're not talking against bike lanes, you're talking for bike lanes! Bike lanes slow motorists down."

"I take the bus on 67. There's no room. And we need more enforcement against bikes. I hope a biker is killed soon after lanes installed."

CB 8 is now asking DOT to go back to square one and do a new study, this time looking at the feasibility of putting bike lanes on every crosstown block on the Upper East Side, the idea being that this approach might prevent bike traffic from clogging the six proposed streets. Though this suggestion emerged out of anti-bike lane sentiment, cyclists ironically stand the most to gain if DOT takes the board up on its request.

"I thought we came to discuss having bike lanes on six blocks instead of [two], and I was for that, but you know, bikes are considered traffic, and wherever there is a space for cars, there should be a space for bikes, so if you ask me should there be bike lanes everywhere, my answer would be absolutely," Schachter said.

When reached for comment, a DOT spokesperson said that the department is committed to building a bike network on the Upper East Side and will work with local residents going forward.

#bike lanes
#Community Board 8
#nimby
#upper east side
Do you know the scoop? Comment below or Send us a Tip