A woman was struck and killed by a flatbed truck in the West Village shortly before 9:00 a.m. this morning. An FDNY spokesman confirmed that the woman was pronounced dead at the scene. Robin Rothstein, who was walking to the subway from her Charlton Street home, says a police officer told her that the woman "was hit at Houston Street and then dragged up the street. You can actually see the area that has a track of blood on the street—you can see it on the cobblestones on the crosswalk."

An NYPD spokesman declined to comment. We'll update when we have more.

[UPDATE] Lindsay Carson, who was headed to work from a yoga class in the area, said in an email that she noticed a backlog of traffic on 6th Avenue. "I realized people were all staring at this big flatbed truck that had stopped...and thats when I noticed the girl between the two back tires, folded up like a dummy." Carson says, "It was such an awful sight—no one knew what to do so we all just stood their waiting for the ambulances. Shocked."

[SECOND UPDATE] An NYPD spokeswoman says that the woman was on a scooter, "crossing east to west on Houston Street" when the tractor trailer traveling northbound struck her with its rear wheel at 6th Avenue. The spokeswoman confirmed that the victim, who is believed to be in her late 50s, was dragged for two blocks until the truck stopped near Carmine Street. There is no criminality suspected, but the investigation is ongoing.

[THIRD UPDATE] An NYPD release notes that the woman was piloting a "foot scooter," and was crossing east to west on 6th Avenue when she was struck by the truck making a right turn from Houston onto 6th Avenue. The release notes that the driver "was informed that he had struck the female" at Minetta Lane. While the investigation is ongoing, there is, as the police spokeswoman told us earlier, "no criminality suspected at this time."

“I heard her scream. She was on a scooter,” said Fernando Portorreal, 30, a construction worker who was on a nearby job site. “People were trying to get the truck to stop. Once she went under the tire it was too late. Her body was wrapped around the tire.” 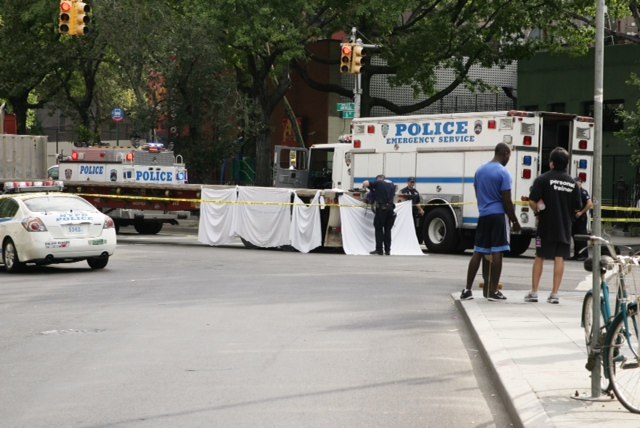 #AIS
#greenwich village
#pedestrian fatalities
Do you know the scoop? Comment below or Send us a Tip