This afternoon, a contingent of Occupy Wall Street protesters will march to Washington Square Park for a massive general assembly at 3 p.m. They describe it as an opportunity to recruit new supporters: "The Washington Square Park thing is a great way to bring us to the next level," said Michael Fix, an organizer of the demonstration. Already, a flock of skateboarders have started making their way down Broadway. At the same time, the band Anti-Flag will perform an acoustic set at Zuccotti Park for protesters there. Below, you can watch the stream of this afternoon's events. [Updates Below]

Update 2:55 pm.: Are Occupy Wall Street protesters planning on taking over Washington Square Park fulltime as a second base of operations? That's what organizer Justine Tunney told the Post: “We plan to stay in Washington Square Park and form a second permanent occupation,” she said. The group doesn't have any "event permits," which is requiring for any gathering in a city park larger than 20 people. Furthermore, there is a 1 a.m. curfew in the park. We've contacted the OWS organizers for comment on this report.

According to Wall Street Journal reporter Andrew Grossman, who is at the park, "#occupywallstreet is about to collide w the low-key saturday afternoon of hundreds of NYers hanging out in Wash Square Park. Beautiful here."

Also, the hundreds of skateboarders rolling down Broadway are indeed not part of the Washington Square Park occupation today-they're part of the 2011 Broadway Bomb.

Update 3:10 p.m.: Hundreds of protesters have begun arriving in the park. 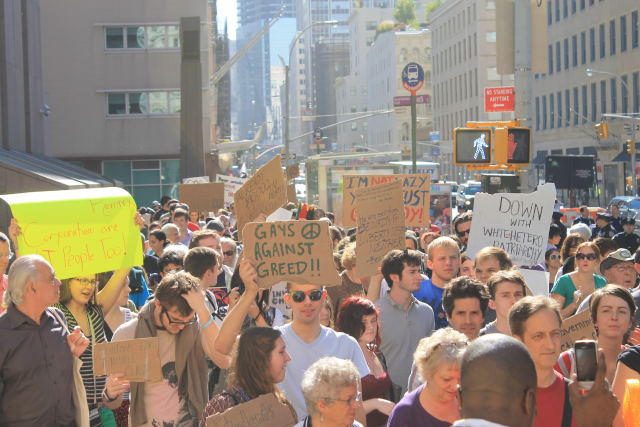 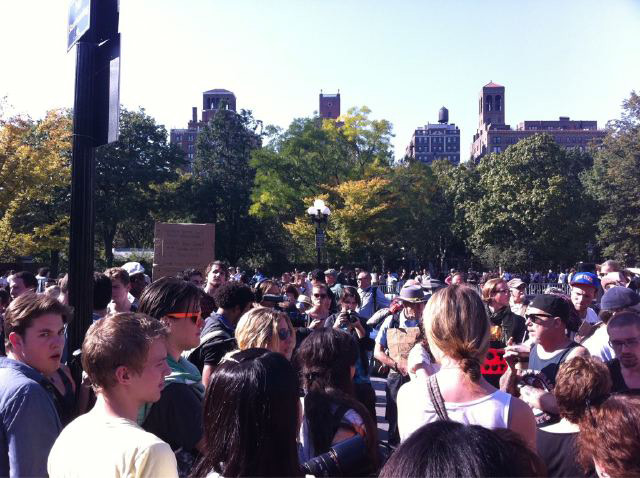 Police have also arrived in full force—lots on motorbikes, and lots wielding cameras to record whatever happens. 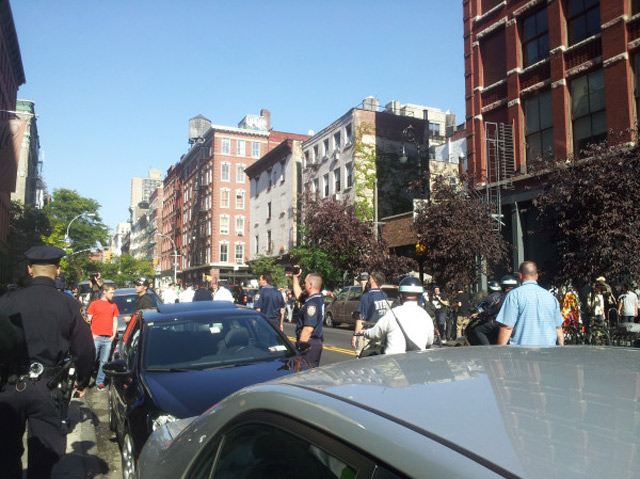 Update 3:30 p.m.: So far, things have been peaceful and calm between protesters and police. General assembly has begun, and various speakers and groups are taking turns speaking to the crowd (with requisite mic checks). Here's a view of the park from 10th Floor of NYU's Kimmel Center: 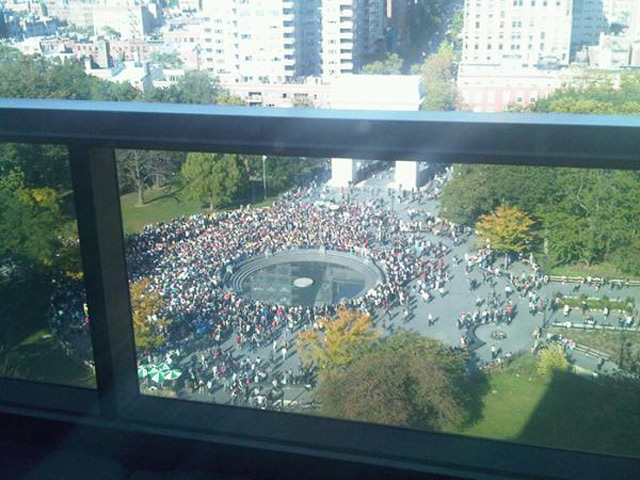 FYI: the live stream is now up and working at the park.

Update 4:00 p.m.: You can get an idea of the police presence at the park in this photo of vans surrounding the park: 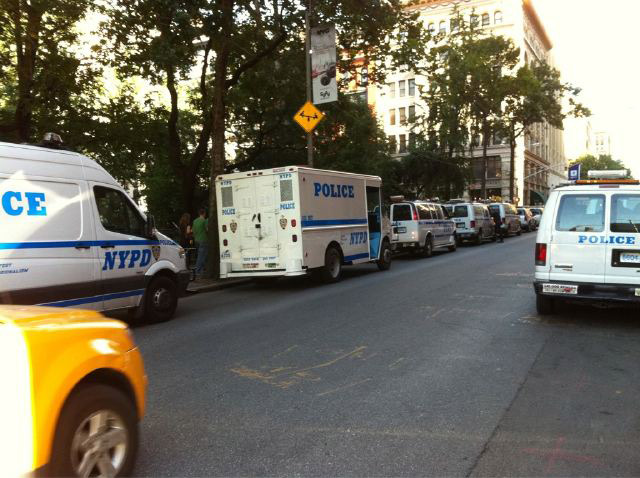 On Waverly, however, it is a different kind of van that is lining the park: 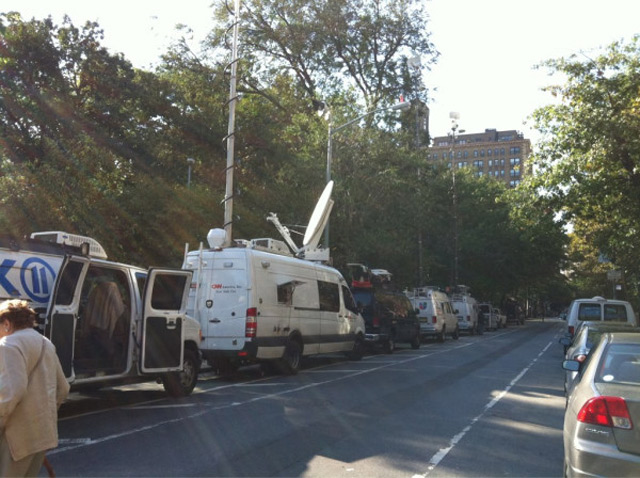 After Mohammed, a speaker "from the Arab Spring," there's been a bit of sniping back-and-forth between the media members at the front of the assembly and the speakers/protesters sitting there—all because the media members won't sit down. Here's some more pictures from around the park currently: 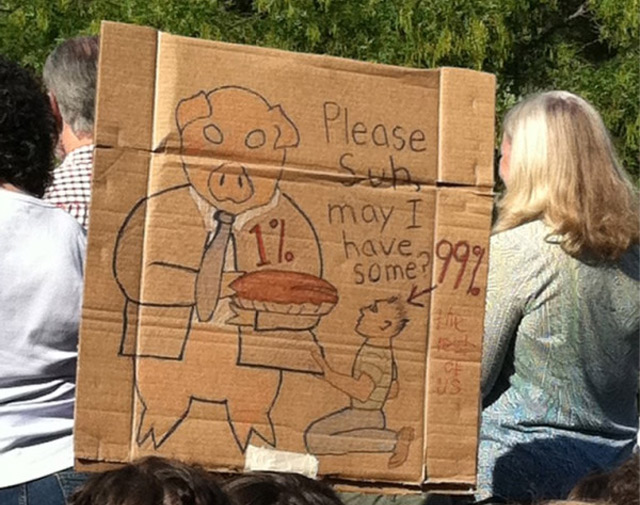 Update 4:10 p.m.: Organizers just announced that this wasn't the final General Assembly of the day— a "formal" one will be taking place tonight at 7 p.m. at Zuccotti Park—which implies they aren't planning on sticking around Washington Square Park tonight. 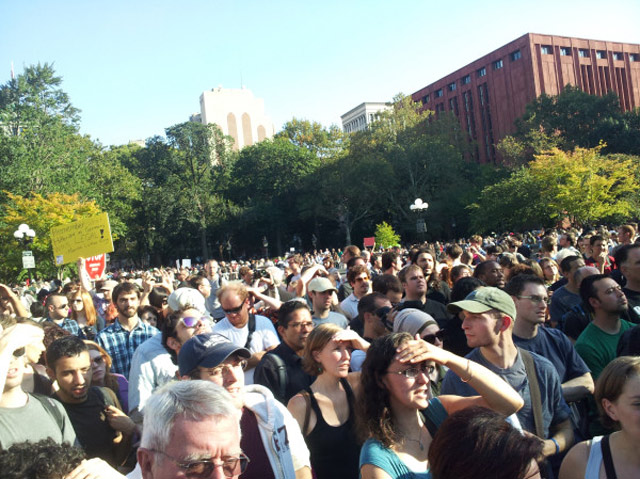 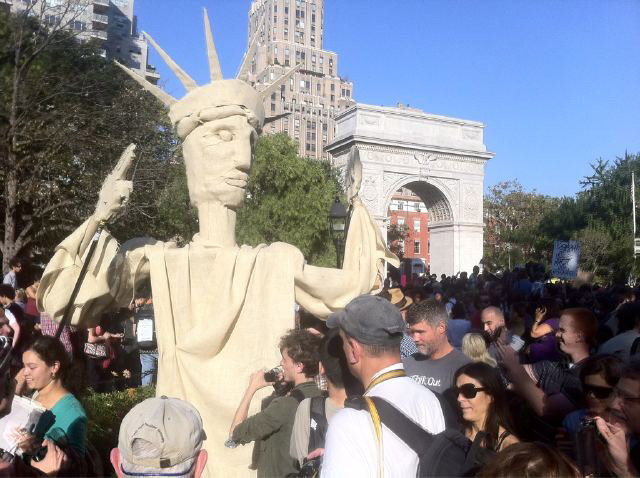 Update 4:30 p.m.: Twitter users are now alleging that thousands of people are assembled at WSP currently. Here's a crowd shot from Michael Moore: 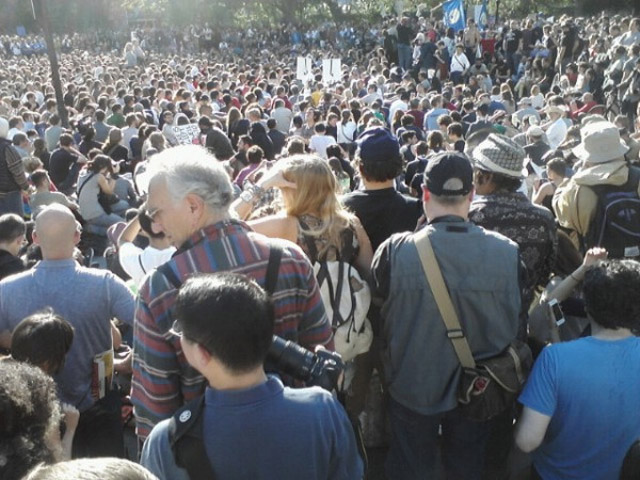