A controversial rezoning plan for East New York, the first of 15 neighborhoods scheduled for significant land-use changes under Mayor de Blasio's $41 billion affordable housing plan, flew through the City Council's Zoning and Land Use committees on Thursday with modifications that will ensure slightly deeper affordability.

"I am calling this the unicorn deal because you're never going to see a deal like this again," said Land Use chair David Greenfield. "This is the new standard that's being set in the city that everyone else will chase, but they're not going to capture it."

Under the modified plan, 1,300 units of affordable housing will be expedited over the next few years, up from 1,200. About 300 apartments planned for public land in the neighborhood will shift slightly more towards the most affordable end of the spectrum—half of them will be set aside for residents who make up to 50% of the Area Median Income (AMI), or $38,851 for a family of three, up from 45%.

Headed to the full City Council for a vote on April 20th, the modified plan also reduces proposed zoning heights on Fulton Street and Pitkin Avenue in East New York and Eastern Parkway in Ocean Hill (to "preserve the character of the neighborhood," according to the City), and scales back on proposed industrial zoning changes that residents feared would push out factories and machine shops in favor of hotels and music venues (Williamsburg has been cited as a cautionary tale).

The City has also pledged to make "every reasonable effort" to convert decrepit cluster-site shelters into affordable housing, and help preserve the neighborhood's dwindling stock of one and two-family homes with loans and grants for repairs. A new elementary school and medical center are in the works, as well as renovations for local parks and dangerous intersections.

But the broader strokes of the plan—more than 6,000 new apartments by 2030, only half of which will be guaranteed below market-rate—remain the same. About a quarter of the apartments will be set aside for families who make $31,000 or less. For context, more than a third of East New York families make $23,350 a year or less.

"We're deeply disappointed that the administration couldn't commit beyond 50% affordable housing," said Michelle Neugebauer, director of the Cypress Hills Local Development Corporation, of the updates. Many East New York residents fear the rezoning will open up the floodgates to luxury development. Land prices in the neighborhood have recently tripled.

East New York is also poised to serve as the City's guinea pig for Mandatory Inclusionary Housing (MIH), another controversial pillar of the Mayor's housing plan that will require developers to include a portion of below-market-rate units in their new residential projects in exchange for City subsidies. Under the updated plan, East New York will offer the new "Deep Affordability Option" introduced last month—20% of housing at 40% AMI, or $39,943 for a family of three.

The updated plan also allows developers across the neighborhood to apply for the Extremely Low & Low-Income Affordability (ELLA) program, which mandates that the vast majority of units be set aside for families that make no more than $46,620 per year—if they so choose. A third option, residual from the original plan, mandates a quarter of new units at 60% of AMI, or $46,620 for a family of three.

"The first plan was arsenic and this is just a watered-down version of the poison," said Brother Paul Muhammad of the Coalition for Community Advancement on Thursday. "You still will die." 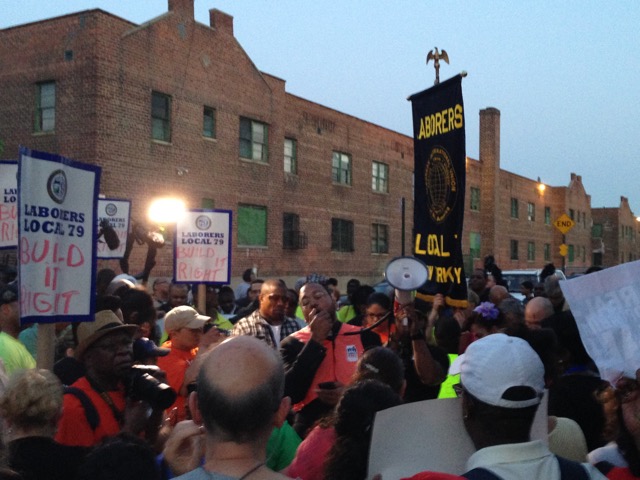 The votes came in quickly on Thursday, with Greenfield rushing along as if approval was a given. When Councilmember Jumaane Williams asked for permission to explain his 'yes' vote—expressing concern that ELLA would not be mandatory—Greenfield quipped, "Can we get an 'aye' if you're going to explain your vote?" to which Williams replied, somewhat uncomfortably, "I don't know if that's how it works, brother."

Councilmember Inez Barron, who represents a sliver of East New York, stood out as the only 'no' vote. "When we look at a community where 25% are making less than $15,000, this still does not go deep enough," she said. "We know that this plan addresses some of them, but there are still people who are rent burdened."

New York Communities For Change, a nonprofit that purports to represent about 1,000 East New York residents, issued a report in March entitled Educating Espinal, demanding that the councilmember push for 50% affordability in all new developments along Atlantic and Pitkin avenues, at 40% of the AMI. The East New York Neighborhood Rezoning Plan, developed by local nonprofits, calls for 5,000 new apartments accessible to current residents. The modified plan falls short of both.

Another significant adjustment to the East New York plan this week was the exclusion of Arlington Village, a 210-unit housing complex on Atlantic Avenue constructed in the 1940s to house World War II veterans. Advocates have been pushing for the City to carve Arlington Village out of its plan, since the complex is almost entirely vacant and was purchased for $30 million in 2015, suggesting that the new owners, Bluestone Group, are banking on significant returns.

"It's been clear to us for a long time that the current owners bought [Arlington Village] at a really inflated price and they have already been trying to evict tenants," said Neugebauer. "It's the largest parcel in the community, so... it deserves its own public review."

Brother Muhammad argued that while the Arlington Village carve-out gives the community some leverage, Bluestone group won't back down, especially as more market-rate apartments crop up. "Speculation won't end," he said. "We're just going to have to fight them again next year."