[UPDATES BELOW] Someone just hung a banner featuring Putin's face and the message, "Peacemaker," on the Manhattan Bridge. Go figure.

We spotted a banner being unfurled on north side of the bridge at 1:47 p.m. At least two people were near the sign when it was unfurled, though it is unclear whether they were involved. One individual was wearing a cap.

We will update with more information when it becomes available.

Update 2:28 p.m.: While it's still unclear who's responsible for the Putin banner, there may be a connection with a pop-up shop that sold Peacemaker Putin gear in 2014. You can read more about the shop, which was located in Gramercy, here.

Meanwhile, one DUMBO officer worker who witnessed the banner hanging tells us, "It took them a while. They were kind of fumbling with it. They definitely were lacking in stage management experience." 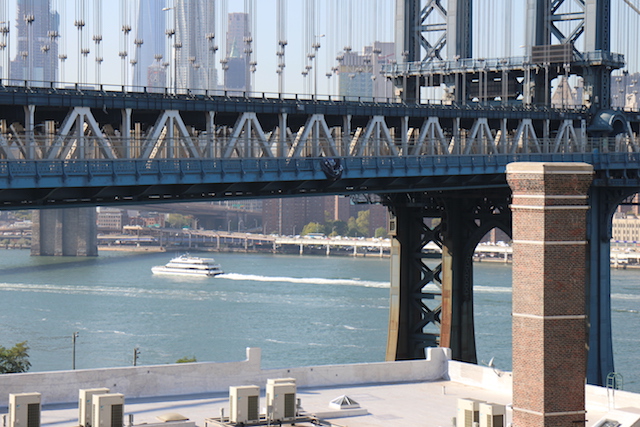 The shirt depicts an animated rat with a terrified look on its face, crossed out by a red prohibition sign and surrounded by a viral quote from Sanitation Commissioner Jessica Tisch.

David Mack has for months argued with top MTA officials over his parking privileges.

David Mack has for months argued with top MTA officials over his parking privileges.

By
Stephen Nessen
and
Clayton Guse
Extra Extra: The Fyre Festival guy is out of prison and ready to throw another festival in the Bahamas
By
James Ramsay
NYC imports road salt from Chile, but a new bill would have the city buy local
By
Sophia Chang
Mayor Adams directs NYPD, first responders to involuntarily take mentally ill to hospitals
By
Elizabeth Kim
Get the news New Yorkers need in your inbox