[Updates] Metro-North Train Derails In The Bronx: At Least Four Dead, Over 60 Injured [Updates Below] Multiple people were reportedly killed and injured after a Metro-North train in the Bronx derailed this morning. An MTA spokesman told the Post the derailment happened around 7:20 a.m. 100 feet north of the Spuyten Duyvil station—at least five of the seven cars derailed. Initial reports indicate at least four people have been killed, and numerous others have been injured. 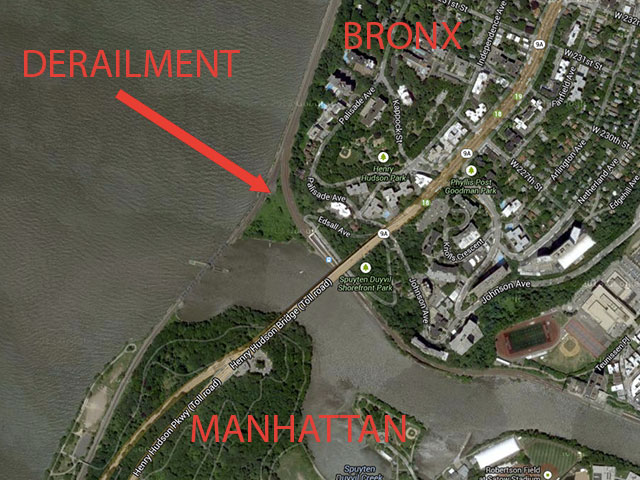 The train was the 5:54 a.m. out of Poughkeepsie due to arrive at Grand Central Station at 7:43 a.m. Passenger Frank Tatulli told ABC that he was on the train, and it was traveling “a lot faster” than it normally does. Tatulli was able to get out of the train on his own, and suffered head and neck injuries.

There was a derailment of a 24-car freight train carrying garbage south of the Spuyten Duyvil station last July, but officials say these scenarios are very different and "unrelated." There was also a massive train collision at the same location in 1882 which led to the death of State Senator Webster Wagner.

Metro-North is the second largest commuter rail service in the country. All Metro-North service between Croton-Harmon and Grand Central Terminal has been suspended. We'll update as more information becomes available.

Photo of Metro North derailment shows how big a deal this is -- and how dangerously close to water this emergency is: pic.twitter.com/qUlFNKsS3b

Gov. Cuomo is now at the scene.

It's still unclear exactly how many people were onboard the train, but NBC is now reporting that over 60 people have been injured, and 11 of those are in critical condition.

Dianna Jackson, 40, of Poughkeepsie, told the Daily News that the driver was going around the curve before the Spuyten Duyvil station "really fast." "I was sitting in the first seat in the front of the car facing backwards," she said. "I was flung six feet. I landed on the shattered window (on the side of the train that hit the ground). I was lying on my back, gravel was flying everywhere. I was dragging along the ground...Maybe it was a minute, it felt like an eternity, I just wanted it to stop...I had gravel in my teeth, I was eating rocks. But I was grateful to be eating rocks because I'm still alive."

Injured man being carried away at #SpuytenDuyvil train derailment. Saw a rescue worker with a chainsaw pic.twitter.com/Hjx0CaV1SY

A law enforcement official told CNN that "the train operator told investigators he applied brakes to the train, but it didn't slow down."

Gov. Cuomo has confirmed that four people were killed and 63 have been injured in the derailment; he adds that the families of the victims have not been notified yet. Cuomo also noted that there are no signs of terrorism or criminal conduct. MTA President Thomas Prendergast would not comment about whether service will be restored today; efforts are focused now on customers and cooperating with the NTSB.

NYPD divers searching water near train derailment for victims who may have been ejected from train. pic.twitter.com/9zQxgOyubu

The FDNY Chief at the scene told reporters that there were three fatalities outside the train and one inside; 11 people are critically injured, and some victims were trapped inside the train. The injured passengers were taken to four hospitals in The Bronx and Manhattan, including St. Barnabus and Columbia Presbyterian.

Eli Mernit, who lives near the scene, went to the derailment site, told us: "The front car of the train was mere inches from the water. I walked close enough to one of the passenger cars to see the gravel and glass copiously littered about the cabin of the train."

Brendan Conley, who also lives close to the scene, said he was awoken by the loud crash: “I thought I heard what I thought was a building collapsing,” Conley, 22, told the Post. “I came to the window and saw people walking across the tracks. Smoke was coming out of the second car that rolled over. I yelled for my mom to call the fire department. I stood there and saw 40 or 50 people come climbing out of the train on their own.”

Below, watch an interview with local Eddie Hoti, a superintendent of a building on Johnson Avenue (right over the crash), who heard the crash and observed the immediate police and fire response:

Bronx Borough President Ruben Diaz Jr. released this statement about the incident: “This morning a horrible accident has left four people dead and dozens more injured, casting a dark shadow over the Thanksgiving and Hanukkah holidays. While we learn more about the specifics of what exactly happened this morning, my thoughts and prayers, as well as those of all 1.4 million Bronx residents, are with the victims and their families as they deal with this terrible tragedy."

Words cannot express my deepest sorrow for the tragic loss of lives from the accident that occurred this morning. I join the community in praying for their loved ones as well as for the quick recovery of those who were injured. We offer our support for help. I applaud Governor Andrew Cuomo for quickly arriving at the scene to provide the critical leadership that was needed in the midst of chaos. We will work closely with NTSB Chairman Deborah Hersman and MTA officials to do everything we can to ensure safety and trust for my constituents and New Yorkers who rely on public transportation.

Let us pray for those killed and injured in the terrible Metro North train derailment this morning in the Bronx.

Here's more video from the scene, via AP:

Railroad union official: "Those cars are far (off the tracks). I've never seen anything like this in my life."

We spoke to Ryan Kelly, 26, a graphic designer from Yorktown who caught the train at Croton-Harmon: "I think everyone in my car got out okay, though there was one person taken out in body parts—other cars had more injuries." Kelly suffered a shattered hand and a torn bicep. "It was surreal. The cars were smoking and steaming and people were screaming and kicking windows and climbing out. The rails were still on so everyone had to be careful." The most surreal thing he recalled was that Christmas music was playing while the train hopped the track.

"When you take a train every day, you don't expect something like that to happen," he added. "I'm not going to take a train for awhile. It's going to be rough."

President Obama said in a statement that his thoughts and prayers are with the friends and families of the victims of the fatal train derailment.

Mayor-Elect de Blasio released the following statement: "Our thoughts and prayers go out to the loved ones of those killed and injured in this morning's tragedy. I spoke with Commissioner Kelly this morning and my office continues to monitor the situation. We stand ready to work with officials and authorities in any way we can to help those in need, and to learn the cause of this accident."

This superb @nytimes aerial photo of today's Metro-North wreck captures the beauty and the danger of Spuyten Duyvil. pic.twitter.com/54pYiQc3OP

#death
#fatalities
#metro north
#the bronx
#train
#original
Do you know the scoop? Comment below or Send us a Tip