by Christopher Robbins and Jake Offenhartz

On Tuesday afternoon, the MTA shut down L train service between Manhattan and Brooklyn for several hours to determine the source of noxious chemical odors that caused several riders to faint and vomit. On Wednesday morning, L train riders said the smells were still lingering.

Rebecca Pedroza says she got on the train at Grand Street in Brooklyn around 8:45 a.m., and smelled the fumes on the train all the way to Union Square. Pedroza described the smell as "exhaust and chemicals that feel like it can destroy your lungs—or like you’re standing behind a really, really old car that skipped 30 years of smog checks."

Very strong smell of fuel at Bedford Ave as of 8.45 this morning. Fumes are also on the train, dissipating as we reach Union Square. Commuter mood feels like: “Let’s just ignore it and get to work.” https://t.co/xCB3m0HqrR

hey @MTA @NYCTSubway care to comment on the noxious fumes making people sick on the L train from grand to lorimer? if you can't work on the tunnels safely, fucking STOP and make a new plan before you kill someone. i'd call for a lawsuit but you'd just raise fares after paying out

The gas smell is still extremely strong and is so for the whole duration of the L train commute. When will this be resolved?

Yesterday, the MTA said that the FDNY and the City's Department of Environmental Protection had "confirmed that non-flammable heating oil from an external source had leaked onto the track and the incident is completely unrelated to the L train project or any other MTA construction."

"Air quality at all stations has been tested and determined to be safe," an MTA spokesman said yesterday, adding that the leak seems to have occurred at the Graham Station.

But the MTA still does not know where the heating oil is coming from.

Last night, our teams deployed spill containment devices in the pump stations and worked to clear the trough and track drainage system to prevent any standing oil/water on the roadbed. Our engineering team is working with NYS-DEC identify the source of the leak. 2/2 ^TBJ

Tramell Thompson, an MTA conductor and founder of Progressive Action, told Gothamist on Wednesday that "a lot of crews are complaining" about the smell. An independent safety unit sent by the Transit Workers Union to investigate the stench on Wednesday morning said that "the smell was bad," Thompson said, prompting fears that some MTA employees could become ill while operating trains.

"The issue is you have customers who are getting sick because of this smell, while train operators are passing through that area eight times a day, and they're in an even more confined space, where the air is more concentrated," Thompson said. "If that smell was at 2 Broadway [MTA headquarters], some of them would not be working. And none of them are in safety sensitive positions."

The New York State Department of Environmental Conservation has not yet responded to a request for comment this morning, nor has the MTA.

This is a developing story; keep refreshing for updates.

UPDATE 12:15 p.m. Multiple New Yorkers have now reached out to Gothamist to say they're experiencing headaches and other symptoms after encountering the smell earlier this morning.

Cheyenne Hudson, a 23-year-old Bushwick resident, has noticed the smell on every commute she's taken between Graham and Bedford Avenues since Monday, adding that it was "very prominent" this morning. She said started feeling light-headed during her commute, and then became anxious after watching "multiple people panic and get off."

"It just smells like gas and the air for some reason turns off on the train? It’s really weird," Hudson said.

Likewise, 34-year-old Williamsburg resident Dave Gimbel encountered the mystery odor at the Lorimer Station at around 9:15 a.m. on Wednesday morning. He said he felt "slightly light-headed" around the Bedford Stop, and noticed several riders covering their faces with scarves. "You could tell the fumes made it on the train," he said.

UPDATE 1:35 p.m. Both commuters and transit workers were still dealing with the L train odor as of 1 p.m. on Wednesday. "It's like my fourth time coming through, and I'm feeling a little lightheaded," a train operator at Lorimer told us. "We had to turn on the A.C."

A different operator passing through the station added: "I am not OK. The whole train smells like an oil dump. It has to do with some construction, they broke some pipes." He then gestured above ground and pulled out of the station.

Exhaust fans running here at the Graham Avenue L stop to blow out the noxious oil fumes, which smell much worse at Lorimer Street pic.twitter.com/0BpbM3Gj0m

Another worker in a New York City Transit beanie noted that "it's been smelling for a week! It's gas from Graham." While the MTA is currently running exhaust fans above the station at Graham Avenue, riders say they're still feeling the effects of the smell.

"It's strong and annoying and it smells like something is about to catch on fire," Wendy Bernard said as she waited for the L to Manhattan.

[UPDATE 4:13 p.m.] The MTA is still working on finding the source of the leak. The agency says the DEC has told them that given the numerous oil spills that have occurred in the surrounding neighborhoods, what's happening now isn't all that surprising.

"Safety is our number one priority, and the FDNY and DEC made it clear yesterday that there is no danger to our riders or workers," Max Young, the MTA's chief external affairs officer told Gothamist in a statement. "We continue to monitor air quality at the affected stations, and it has remained safe."

Young added, "As reported yesterday, the leak was unrelated to MTA construction or the L-train project, and our inspectors and the DEC are investigating the original external source of the leak. The MTA worked overnight to drain and absorb the liquid on the track and vent out the stations, and venting will continue until the odor is gone."

Asked if oil is still leaking on the tracks, the MTA did not respond.

[UPDATE 5:43 p.m.] A spokesperson for the Transport Workers Union Local 100 tells Gothamist that five workers have been sickened by the fumes since Monday, including a train operator, a conductor, and a station agent. Two of those five, a station agent and a cleaner, were being transported to area hospitals on Wednesday night.

The spokesperson also shared this photo, which they said showed a station agent being taken to a hospital on Wednesday night. 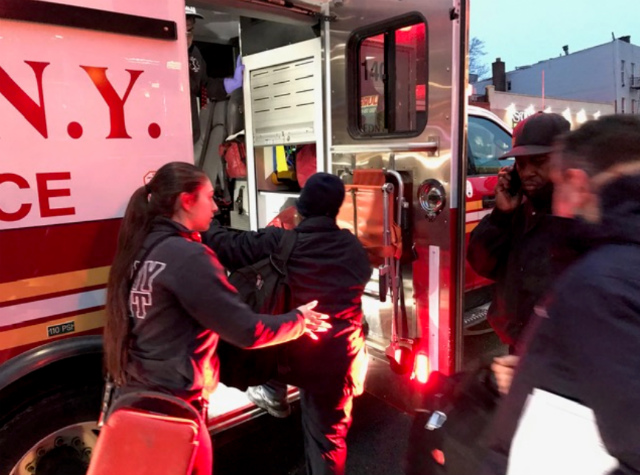 "We're taking this extremely seriously because this poses a potential threat not only to our members but also the riding public," said Lynwood Whichard, TWU Local 100 Vice President of Stations. "We can't have the people who move New York passing out on duty."

#bad smells
#denied it supplied it etc go wild in the comments real mature
#fumes
#l train
#MTA
#odors
#vamors
#we the commuters
#original
Do you know the scoop? Comment below or Send us a Tip