The Federal Aviation Administration has temporarily halted flights at LaGuardia Airport, due to staffing issues related to the ongoing government shutdown. [Updates below]

A spokesperson for the Port Authority has confirmed that the FAA ordered the ground stop at the airport over Air Traffic Control staffing issues at centers in Jacksonville and Washington D.C. That means that flights to and from the airport will be delayed up to 30 minutes.

A spokesperson for the FAA tells Gothamist that they have experienced a "slight increase in sick leave at two facilities," which they've mitigated by "augmenting staffing, rerouting traffic, and increasing spacing between aircraft when needed." The FAA's website indicates that flights coming into LaGuardia may be delayed by an average of 41 minutes, with longer delays possible.

FAA now holding flights at their departing airports into NY LaGuardia due to "staffing issues" in DC, FL. They expect average delays to be 41m, up to 1h 15m. pic.twitter.com/0y5HdyK2D2

There are reports of cascading delays at other airports related to the staffing shortage as well.

Air traffic is delayed at LaGuardia, Philadelphia, and Newark Airports due to staffing issues at an FAA regional air traffic control center, according to the FAA status website.

LaGuardia is a Delta hub. Newark is a United hub. Philly is an American hub.

Basically, this has the potential to impact the entire air traffic grid very quickly.https://t.co/V31W0YTpZQ

The flight delays come one day after JetBlue Airways CEO Robin Hayes warned that the aviation system was nearing a “tipping point" due to the government shutdown, which is now in its 35th day.

Asked about the ground stoppage on his weekly appearance on the Brian Lehrer Show, Mayor Bill de Blasio said he had not heard the news. "I wish I could say I was shocked, Brian, but this is the cost of the shutdown. We've heard for days that the situation with air traffic control and the situation with security was growing more frayed," he said. "If our airports are not functioning well, people will die."

This is ongoing story and we'll update as more information becomes available.

UPDATE 11:00 a.m.: Flights arriving into LaGuardia are now delayed by an average of 1 hour and 26 minutes, while Newark Airport is experiencing an hour-long gate hold and taxi delay, according to the FAA. The agency's website still says that flights into and out of JFK have not been affected, though some passengers have indicated otherwise.

Airline has asked us to leave the plane due to delay at @JFKairport and #FAA staffing shortages. #JFK #GovernmentShutdown pic.twitter.com/b1LUZWmWLa

Lauren Sweeney, a passenger flying out of LaGuardia Airport, says that it's a "pretty chaotic scene" at Delta's Terminal C. According to her husband, Dan Sweeney, she experienced a lengthy delay, which officials attributed to "problems with air traffic control." As of 11:00 a.m., they were trying to board everyone at once, he said. 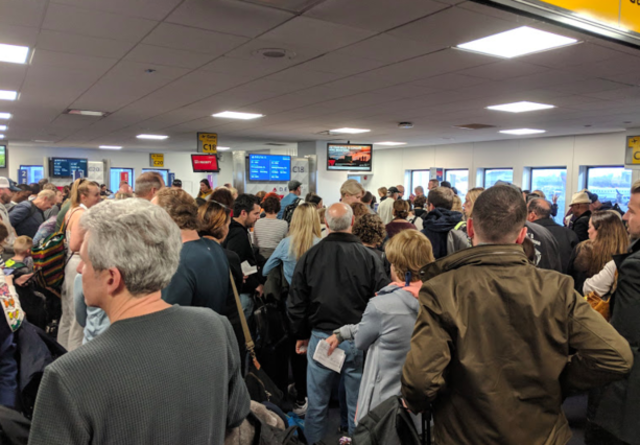 Last week, Mark Dunlap, a Professional Aviation Safety Specialist assistant, told Gothamist that passengers should expect issues at local airports as a result of the shutdown.

"Is everyone still safe flying? Probably yes,” Dunlap said. “But as you keep going on, cracks start to form. And we cover so many aspects in aviation safety you can’t afford to have any cracks at all if you want everybody to be safe. The longer this goes on the more chances that something’s going to break. That’s what has us concerned.”

UPDATE 11:30 a.m.: In a statement, President of the Association of Flight Attendants-CWA Sara Nelson said airport employees have been "betrayed" by the government.

"The aviation system depends on the safety professionals who make it run," said Nelson. "They have been doing unbelievably heroic work even as they are betrayed by the government that employs them. They are fatigued, worried, distracted—but they won’t risk our safety. So the planes will stay on the ground. This is anything but a sick out—it is only about our safety and the air traffic controllers’ absolute commitment to it."

“Do we have your attention now, Leader McConnell? All lawmakers?" she added. "Open the government and then get back to the business of democracy to discuss whatever issue you so choose. This shutdown must end immediately. Our country’s entire economy on the line.”

UPDATE 12:00 p.m.: Delta is currently experiencing about 200 flight delays at LaGuardia and other airports in the Northeast region due to the Ground Delay Program, according to a spokesperson for the airline.

A spokesperson for United noted they were working closely with the FAA and airport officials to try to minimize the impact on operations. "We don’t anticipate significant schedule disruptions, but it is another good illustration of the escalating impact of the government shutdown and the need for the federal government to promptly re-open.”

Southwest Airlines has encouraged passengers to check their website for the most up-to-date flight information.

Due to staffing shortages at FAA air traffic control centers along the East Coast, there are delays at EWR. Please confirm your flight with your airline. [33]

UPDATE 1:00 p.m.: Rob Ward was set to take a Delta flight from LaGuardia to West Palm Beach at 8:05 this morning, when he was informed by the pilot that a batch of runways had been closed for unknown reasons. Nearly five hours later, he’s now stranded on a plane in Atlanta, unsure about when he will make it to his destination.

At first, Ward said, “the pilot sounded surprised, he even said that ‘It can’t be weather related.’ We waited about 45 minutes and we were finally rerouted to an open runway, took off and the circled around NYC until the pilot came on and told us that we were finally going in the right direction.”

“[The pilot] kept saying he didn’t have any info about what was causing all of this. Finally he told us it was due to personnel problems at air traffic control and that we had burned through so much fuel that we couldn’t make it all the way to West Palm Beach. So now we landed in Atlanta, refueled and now we are 15th in line to take off.”

Ward added that passengers on the plane are “just rolling with it” and that “everyone is pretty calm and good natured.”

UPDATE 1:15 p.m.: In an email to Gothamist, Lynda Bloomberg, a National Airspace Operations Manager at the FAA, said that this morning’s delays will be “a new normal until this shutdown is over.”

“I also know of many controllers who are ready to pull the plug and either retire or to go work for someone else,” she added. “I’ve also seen many Tech ops employees expressing the same views."

President Trump is reportedly planning to make an announcement related to the shutdown later this afternoon.