[Updates Below] A woman was fatally struck by a private sanitation truck in the Flatiron district in Manhattan today. According to police, the incident happened around 12:26 p.m. at East 23rd Street and Madison Avenue. An NYPD spokesperson confirmed the woman was pronounced dead at the scene, but had little other information. Based on photos, it appears she was hit by a CityWide demolition and rubbish removal vehicle. Check out some more Tweets and photos from the scene below. We'll update once we learn more information.

Just saw a person under a truck with EMT everywhere on 23rd..Were all in a rush but Walk safe nyers! #friendlyreminder

And more pics from park ave and 23rd #odd twitter.com/sabredutch/sta…

NYPD, NYFD at scene where man hit by truck on 23&Park. Not graphic photo. twitter.com/AlexJamesFitz/…

Update: According to the Post, the victim was a cyclist who was headed eastbound on East 23rd Street. The blonde woman, who they say appeared to be her in 60s, was not wearing a helmet. "He clipped her, and she just rolled and fell underneath the wheel," said street vendor and witness Greg Lamans. "Her legs ended up where her arms would be. Her legs were above her head."

Update: Witness Wendy Slater, who took the photo below, told us she got to the scene about 15 minutes after the incident occurred: "The woman was still under the garbage truck. Her bike and purse were on the sidewalk in front of Spin," she said. As of 3:15 p.m., "the truck is still here. The M23 that was behind it is still here too. They are just now removing her body." 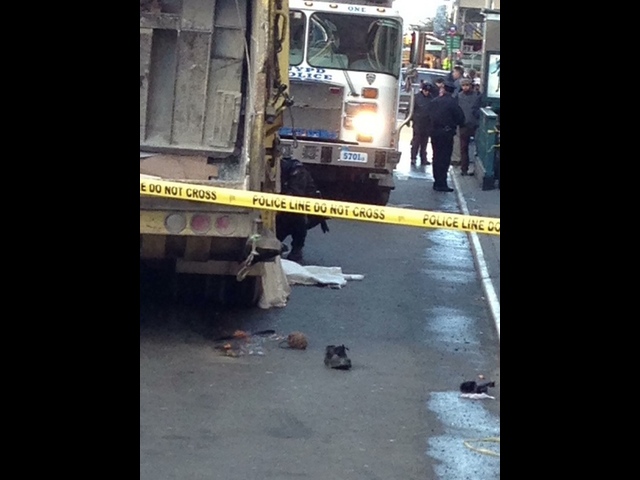 #death
#flatiron district
#garbage
#sanitation truck
#original
Do you know the scoop? Comment below or Send us a Tip