[UPDATES BELOW] On the heels of the massive, largely peaceful People's Climate March, a smaller group of activists has gathered in Lower Manhattan this morning to participate in direct action civil disobedience. With the goal of "stopping capitalism" and "ending the climate crisis," protesters are expected to "Flood Wall Street" in the coming hours. "The economy of the 1% is destroying the planet, flooding our homes, and wrecking our communities," the protesters' website declares.

This could get interesting, as police are prepared to quickly stifle any disruptions in the heavily fortified area around the Stock Exchange. One area worker says Wall Street is "already under lockdown. I had to walk two blocks out of my way to get to work." Protesters are currently massing in Battery Park. We'll update this post as the march gets underway; you can also follow along with Gothamist reporter Christopher Robbins on Twitter and the #FloodWallStreet Twitter hashtag.

A good amount of people are in Battery Park for #FloodWallStreet -- numbers are tricky but I'd say close 1,000 so far pic.twitter.com/hUxi7sQPnk

"We don't just want action from our elites, we demand justice from below." @NaomiAKlein #floodwallstreet

#FloodWallStreet ? Why? What does Wall Street have to do with climate change? ... Stop blaming all the worlds problems on the rich 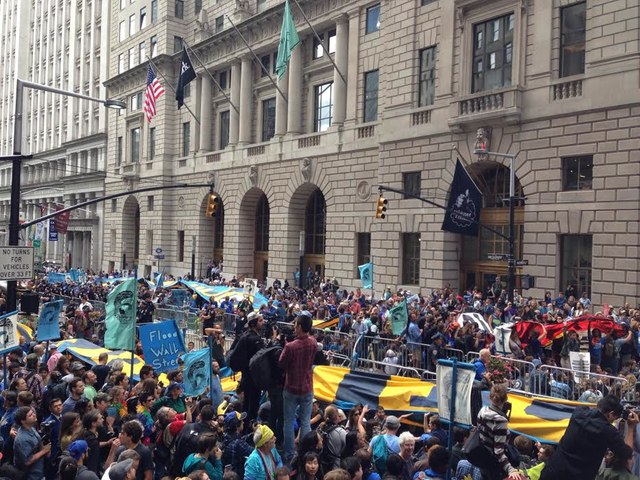 Update 12:09 p.m.: Demonstrators have advanced into the Financial District and civil disobedience has begun.

About 100 sit on Broadway, heard another contingent is headed towards Wall Street #FloodWallStreet pic.twitter.com/YkRsOjBB2l

Broadway still blocked by #FloodWallStreet peaceful so far, no arrests as far as I know. Sit in at bull. pic.twitter.com/bSOYQoVbTJ

Well over a thousand people are clogging the streets. Still no dispersal order from NYPD #floodwallstreet pic.twitter.com/UyPfG8eC6s 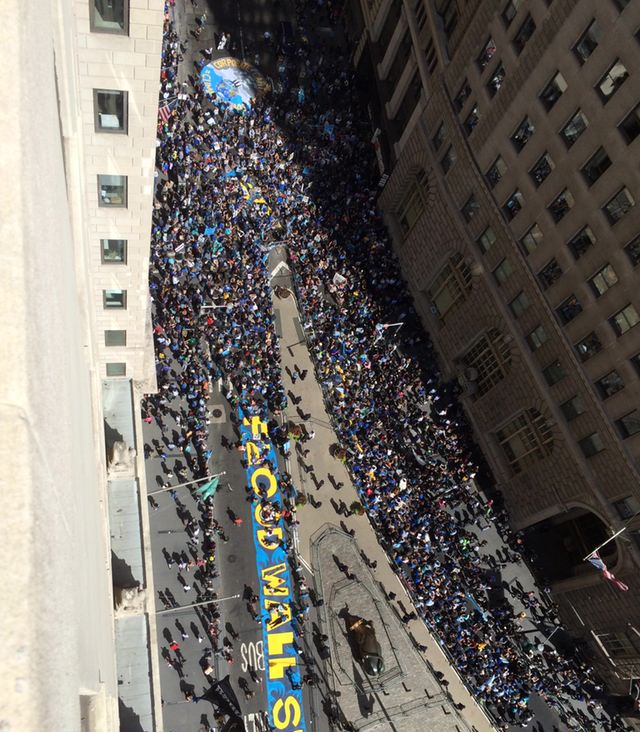 An overhead view from an anonymous tipster.

1:26 p.m. Police have not moved to arrest the protesters sitting in the street... yet. While everyone waits, it's lunchtime:

Gonna be here a while. Maybe we should order pizza? Please send orders to in front of 26 broadway #FloodWallStreet

1:35 p.m.: Some arrests have been made. From Newsweek reporter (and former Gothamist intern) Zoë Schlanger:

Guy arrested says "I'm being tortured. I was tortured in 2008." NLG taking notes on handcuffs. pic.twitter.com/enj7sEBHuU

2:39 p.m.: The NYPD appears to be allowing the demonstrators to occupy the streets around "The Charging Bull." Free pizza is being distributed, and some protesters have indicated they will remain until at least the closing bell.

Maybe a decision has been made. Michael Premo mic-checks now: "We stay here, through the closing bell and beyond! Pizzas are on the way."

Talk is that #FloodWallStreet will hang out until the closing bell, or until _____. Atmosphere in the barricades is fluid & festive

Now the group is marching north on Broadway #FloodWallStreet pic.twitter.com/IT0LpJGgAj

Forty feet thick of photojournalists between the cops and the face of the march. Critical theorists have at it.

4:04 p.m.: Police have appeared reluctant to make mass arrests so far, but that moment may be at hand. At least 1,000 protesters have massed by the intersection of Wall Street and Broadway, and a brief skirmish between cops and protesters just occurred, with both sides shoving barricades. A photographer and protesters were pepper sprayed, but it's unclear who discharged the pepper spray. Robbins just filed this video, and says officers in riot gear are now at the scene:

Working photojournalist (who doesn't want to become the story) is among those who took the pepper spray in the face.

Police are not letting anyone near the protest anymore. Subway shut down. Ready for mass arrests. #FloodWallStreet pic.twitter.com/Vz8kHTkDQ1

#climate change
#Flood Wall Street
#people's climate march
#protesters
#protests
Do you know the scoop? Comment below or Send us a Tip