[UPDATE BELOW] It appears that a tattoo artist employed at Prospect Heights' Red Legged Devil tattoo shop—owned by Chris Torres, who was featured on the TLC show NY Ink—took the opportunity to tattoo his dog yesterday while the pet was knocked out for a medical procedure.

Artist Mistah Metro posted the above photo on his Instagram page, bragging that his dog was "cooler than yours" because the vet allowed him to tattoo her while she was under anesthesia, having just had her spleen removed. The dog appears, at best, truly bummed by this turn of events, and at worst, may be bleeding a little from the mouth, though that's almost certainly the result of the sweet Hefe filter—or is that Rise?—Metro chose to apply.

Chris Torres, however, wants the public to know that neither he nor his shop had anything to do with the controversial inking, which in some circles could be considered animal cruelty. 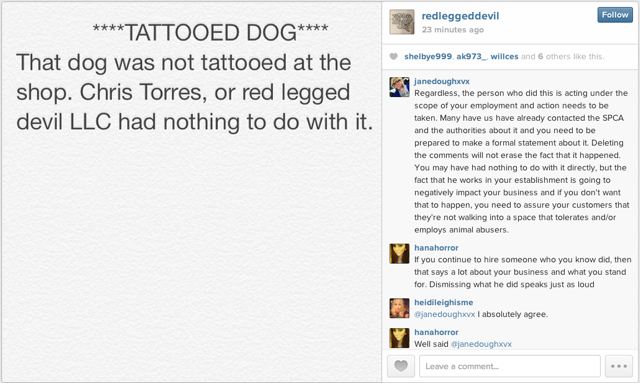 And anyway, the ASPCA does it all the time for identification purposes, animal tattoo advocates argue. (See the updates below for their statement.) Neither Torres nor Metro have responded to requests for comment.

@mister_smiley @mikeisthereason you guys are aware that the ASPCA tattoos dogs & cats once they've speyed or neutered them, right?

If the ASPCA told you to jump off a cliff, would you do it?

Update, 12:20 p.m.: While tattooing one's pet is not illegal, the American Veterinary Medical Association, which dispenses ethical guidance to vets across the country, would really prefer it didn't happen. "We can't say a tattoo is going to do enormous damage to an animal, said Emily Patterson-Kane, an animal welfare scientist at the organization, "but we do look at whether a procedure is therapeutically necessary first—if it's not, that's not the vets goal."

The ASPCA condones the use of tattooing for only identification purposes following spay or neuter surgery. This practice helps animal welfare professionals clearly identify animals that have been altered, thereby preventing unnecessary future surgeries. This painless procedure is performed by a licensed veterinarian or veterinary technician while the animal is under anesthesia. The marks are very small and have a specific purpose, which is to avoid inflicting undue pain and stress later if that animal is unknowingly brought in for a spay surgery a second time.

Tattooing an animal for the vain sake of joy and entertainment of the owner - without any regard for the well-being of the animal - is not at all comparable to the incident in question and is not something the ASPCA supports.

Update, 3:40 p.m.: Reached for comment, Red Legged Devil owner Chris Torres was emphatic that the decision of his employee, Mistah Metro, to tattoo his dog had nothing to do with him. "The dog wasn’t tattooed at the shop—what [employees] do on their own time isn't my business," he said.

Perhaps not, but Torres still has plenty of opinions on the matter. "People are still offered jobs after being pedophiles," he said. “I don’t know why everyone is treating this kid like he raped a 12-year-old."

Mistah Metro has yet to respond to a request for comment.

#animal cruelty
#park slope
#red legged devil
#tattoos
#original
Do you know the scoop? Comment below or Send us a Tip