[Updates Below] Brookfield, the company which owns Zuccotti Park, is distributing flyers (see below) to protesters today informing them that the western portion of the park will be closed at 7 a.m. Friday for cleaning. The cleaning will take approximately four hours, and then the demonstrators will be allowed back in that area—"for lawful use consistent with our regulation." But the new regulations that Brookfield created would prohibit many of the things that have enabled the occupation to continue; among other things, the new rules prohibit sleeping bags, tarps, and even sleeping on the ground.

Protesters are currently holding a General Assembly meeting to discuss how to deal with this, while others are already cleaning the park themselves. We're also told a group of attorneys working with Occupy Wall Street are meeting to discuss the imminent showdown between police and protesters. One protester told the Wall Street Journal, "Unsanitary? We have a cleaning department here. Tents or not, we will sleep without tents. I think people are going to end up doing it no matter what."

The demonstrators issued a statement last night promising to lock arms around the park tomorrow in defiance of the police; we'll update as we know more. Gothamist's Chris Robbins is down there, and reports that "the crowd for Tom Morello isn't huge thanks to frantic cleanup."

UPDATE 1:25 p.m.: Patrick Bruner, a spokesman for Occupy Wall Street, tells us, "The Mayor addressed just a few dozen people during his visit, and didn't participate in the General Assembly process. It's very easy for the Mayor to engage with the protesters in a meaningful way, if he wanted to, and would be receptive to that." Every person who has spoken to Occupy Wall Street has done so through the General Assembly, and Robbins, who is at Zuccotti now, tells us the protesters' mindset is that Bloomberg didn't negotiate with them, but just made a brief appearance for a photo op.

The protesters are now deciding if they're going to cooperate with the Mayor's office, but meanwhile, they're doing their own cleaning. Robbins tells us, "There's no way in hell that they're going to clean it to any standard that's going to be considered clean. In fact, there's no way Brookfield can clean all this in 24 hours, let alone 12."

UPDATE 2:20 p.m. The General Assembly has agreed to allocate $3,000 (out of the estimated $150,000 in its coffers) to hiring a professional cleaning crew. Power washers and a flatbed truck are being brought in for the protesters, who are determined to clean the park themselves. During the DIY cleaning, an impromptu "OWS coat check" at 92 Broadway will store protesters belongings during cleaning "if placed in ONE bag."

At this point, it looks like protesters are planning to defy orders to vacate any area of the park, even temporarily, and are calling on supporters to come to Zuccotti Park at 6 a.m. tomorrow morning 'to help us with an eviction defense." Now it's up to the city to decide whether to forcibly remove the demonstrators. But NYPD commissioner Ray Kelly seems prepared to do so, and told reporters today that, as suspected, "People will have to remove all their belongings and leave the park. After it’s cleaned, they’ll be able to come back. But they won’t be able to bring back the gear, the sleeping bags, that sort of thing will not be able to be brought back into the park."

Occupy Wall Street is gaining momentum, with occupation actions now happening in cities across the country. But last night Mayor Bloomberg and the NYPD notified Occupy Wall Street participants about plans to “clean the park”—the site of the Wall Street protests—tomorrow starting at 7am. "Cleaning" was used as a pretext to shut down “Bloombergville” a few months back, and to shut down peaceful occupations elsewhere. Bloomberg says that the park will be open for public usage following the cleaning, but with a notable caveat: Occupy Wall Street participants must follow the “rules”. These rules include, "no tarps or sleeping bags" and "no lying down." So, seems likely that this is their attempt to shut down #OWS for good. PLEASE TAKE ACTION: 1) Call 311 and tell Bloomberg to support our right to assemble and to not interfere with #OWS. If you are calling from outside NY use this number 212-NEW-YORK.

2) Come to #OWS on FRIDAY AT 6AM to defend the occupation from eviction.

Occupy Wall Street is committed to keeping the park clean and safe —
we even have a Sanitation Working Group whose purpose this is. We are
organizing major cleaning operations today and will do so regularly.

If Bloomberg truly cares about sanitation here he should support the
installation of portopans and dumpsters. #OWS allies have been working
to secure these things to support our efforts.

We know where the real dirt is: on Wall Street. Billionaire Bloomberg
is beholden to bankers.We won't allow Bloomberg and the NYPD to foreclose our occupation.
This is an occupation, not a permitted picnic.

Update 3:00 p.m.: Manhattan Borough President Scott Stringer and Community Board 1 Chair Julie Menin are holding a press conference at 4:30 p.m. today to urge the City to continue negotiations with Occupy Wall Street in advance of the city’s plans to clean and empty Zuccotti Park at 7 a.m. tomorrow morning. A press release from Stringer's office reads: "This morning, the Borough President met with members of OWS and encouraged them to formalize and publicize a ‘good neighbor policy’ to address community concerns about the quality of life impacts of their ongoing protests."

During today's emergency General Assembly, a speaker read a "document of mutual respect" between the local Community Board and Occupy Wall Street.

Update 4:45 p.m. Public Advocate Bill De Blasio visited Zuccotti Park this afternoon in solidarity with the protesters, and issued this statement: "This has been a peaceful and meaningful movement and the City needs to respond to it with dialogue. We have an obligation to protect New Yorkers’ ability to freely exercise their First Amendment rights.

"For weeks now, the police and residents have shown consideration to the protesters, and that respect has been reciprocated. I am deeply concerned that the City has upended this balance by trying to unilaterally remove protesters and their effects from Zuccotti Park. The City and Brookfield Management must engage this movement to find a suitable compromise."

Here are the flyers Brookfield and cops are handing out: 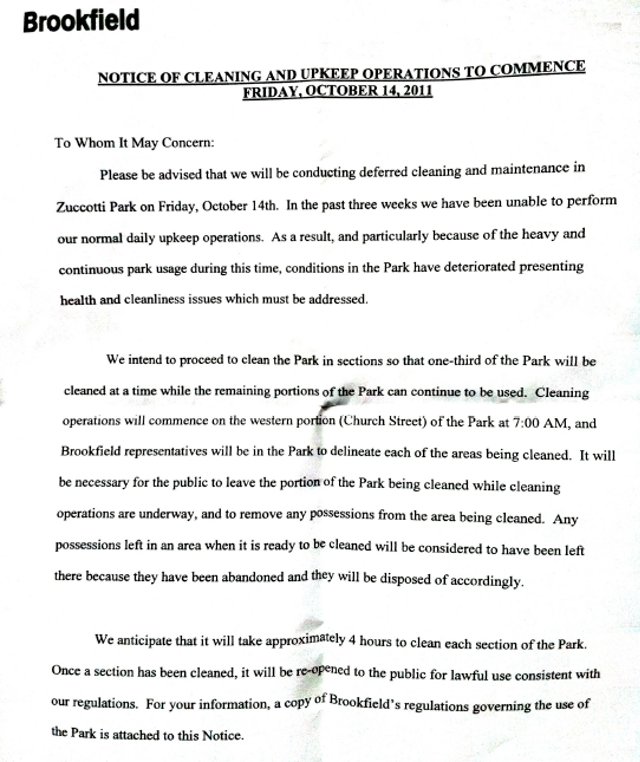 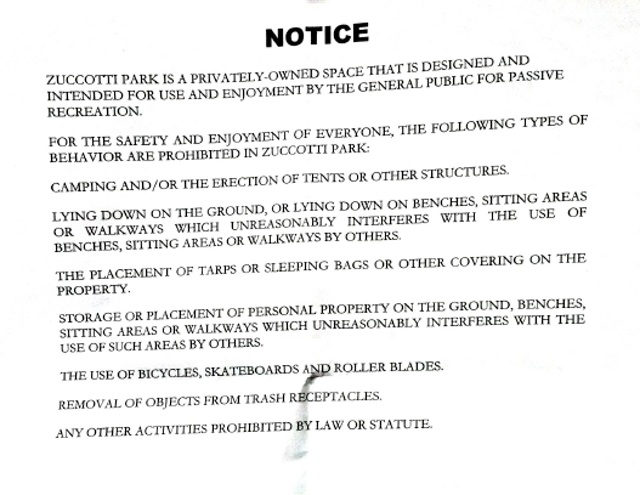 #brookfield properties
#cleaning
#occupy wall street
#protest
#sanitation
Do you know the scoop? Comment below or Send us a Tip