[Update Below] According to multiple reports, officials in Connecticut responded to a shooting at Sandy Hook Elementary School in Newtown earlier this morning. The Hartford Courant says police reported that a shooter was in the main office of the school just after 9:40 a.m. A person in one room had “numerous gunshot wounds,” police said.

The gunman has now been killed, according to ABC; there are conflicting reports as to whether there was a second gunman. Newtown Public School District secretary of superintendent Kathy June said in a statement that the district's school were locked down because of the shooting: "The district is taking preventive measures by putting all schools in lockdown until we ensure the safety of all students and staff."

According to The Newtown Bee, "One child was carried from the school by a police officer, apparently seriously wounded." NBC CT reports that at least three patients have been admitted to Danbury Hospital. A mother being interviewed on NBC claims the school's principal was killed.

Sandy Hook Elementary is kindergarten through 4th grade; Newtown (which has population around 27K) is about 60 miles northeast of the city. We'll update as more information becomes available.

Update 11:24 a.m.: According to the Post, a dispatcher at the Newtown Volunteer Ambulance Corps says a teacher has been shot in the foot. An NBC News corespondent on the scene reports that staff "were in morning meetings when these shots were fired...they heard multiple shots." According to WTNH, children are being taken to a nearby firehouse.

Update 11:35 a.m.: Police told The Courant thatthere are multiple shooting victims, and some of them are children. The nature of those injuries are unclear. NBC is now reporting that two handguns have been recovered at the scene.

Update 11:46 a.m.: Newtown Mayor Mark Boughton told CNN that at least three people were wounded and are in "very serious" condition at Danbury Hospital. He couldn't say whether the victims were children. The Courant is reporting that children are among those confirmed to be dead.

Update 12:11 p.m.: According to Connecticut Post, "Police have surrounded a purple van at 33 Crosby Street in Danbury that may be connected to Newtown school shooting." The shooter's body is still in a classroom, a source told CNN. Danbury Hospital confirmed on Facebook that it's treating some of the victims:

To date, three patients have been transported to Danbury Hospital from the scene. Out of abundance of caution and not because of any direct threat Danbury Hospital is under lockdown. This allows us simply to focus on the important work at hand.

Update 12:21 p.m.: CBS News is now reporting that "preliminary information indicates a student's father was CT school gunman." In addition, HLN is reporting that the principal and a school psychologist were killed.

Update 12:30 p.m.: A third grader described the shooting to CNN, which you can see below:

Update 12:37 p.m.: Connecticut officials say that more than a dozen people, including children, were killed during this morning's shooting; at least 20 people were shot.

CBS is now reporting that 27 people are dead, and 14 of them are children. The Courant reports that many of the shootings took place in a kindergarten classroom.

CBS is reporting that the adult gunman is a 20-year-old and from NJ.

Update 1:05 p.m.: Libor Jany, a news reporter for News Times, has been tweeting on the ground from the scene: "9 y/o girl says that "police with big guns" led her classmates out of the building. Asked them to cover their eyes...The girl's 17 y/o brother says that he saw a girl being carried out of the school by police. Her face was pale, her body still." She tweeted earlier, "A former TA says that school doors have magnetic locks. The office has to buzz you in during school hours."

President Obama has been updated on the latest info on the shooting. White House spokesman Jay Carney had this to say at a press conference:

I think it's important on a day like today to view this as I know the president, as a father does and I as a father and others who are parents certainly do, which is to feel enormous sympathy for families that are affected and to do everything we can to support state and local law enforcement and support those who are enduring what appears to be a very tragic event. There is, I'm sure, will be, rather, a day for discussion of the usual Washington policy debates but I don't think today is that day.

Update 1:15 p.m. Fox CT reporter Ayana Harry tweets that police are at the suspect's home in Connecticut. You can see a photo below: 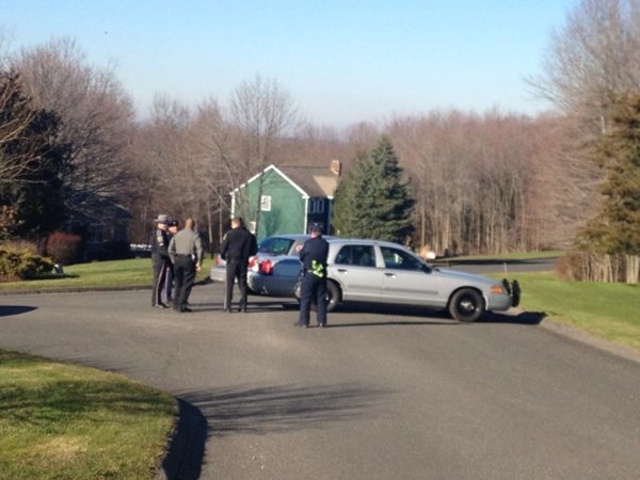 CBS's John Miller repeats a previous report that the shooter was the father of a student, adding that "Second Gunman in custody." NBC is also reporting that a second person is in custody, but add that it's unclear whether he was involved with the shooting. A news conference is coming up soon.

Update 1:26 p.m.: The alleged gunman, who is believed to be 20-years-old, was described as dressed in all black and carrying two firearms (reportedly a .223-caliber rifle, and a handgun) when he arrived at the school. AP has confirmed that the shooter has a connection to the school, but it isn't clear what the connection is just yet.

Mergim Bajraliu, 17, told CBS Connecticut that he heard the echo of the gunshots from his home and raced to check on his 9-year-old sister at the school: "He said his sister, who was fine, heard a scream come over the intercom at one point. He said teachers were shaking and crying as they came out of the building. 'Everyone was just traumatized,' he said."

Update 1:47 p.m.: At the news conference, an aide said Connecticut Gov. Dan Malloy is "horrified" by school shooting. Paul Vance, of Connecticut state police, said that when police arrived at the school, they immediately entered and began to clear out the school. "There were several fatalities at the scene," he noted, including both students and staff. He confirmed that the shooter is "deceased inside the building," though it wasn't clear whether he was already dead when they arrived.

Update 2:10 p.m.: Updates just keep getting worse: CNN is now reporting that the death toll is closer to 30 than 20. The Connecticut Post echoes that, saying 29 were killed, and 22 of them were children.

According to Hartford Courant's Mary Ellen Fillo, the "shooter murdered someone else before going to school according to new reports." Possibly related: "NBC's Pete Williams reports a parent of the suspected shooter has been found dead at a home in New Jersey."

Update 2:25 p.m.: CNN's Susan Candiotti is reporting that a law enforcement source has identified the suspect as 24-year-old Ryan Lanza of New Jersey.

CBS News has also confirmed that the gunman's mother was a teacher at the elementary school, and she is among those dead. NBC is reporting live that Lanza allegedly killed his father in NJ, then went up to Connecticut.

Update 2:34 p.m.: Here's a powerful video of a parent of a second grader at the school discussing the tragedy with AP:

Update 3:30 p.m.: Connecticut Governor Dan Malloy is speaking to the press now: "You can never be prepared for this kind of incident." He noted that, "the perpetrator of the crime is dead, as is an individual" suspect lived with. Adult deceased at that location.

Paul Vance, of Connecticut state police, noted that when police received a call about the shooting around 9:30 a.m., they immediately realized the "intensity and difficulty of the situation." He confirmed that 18 children were confirmed dead at the scene, two children died while in transport to hospital, and six adults were pronounced dead at the scene. Altogether, 27 people were killed at the school, along with one other adult who was found dead at a home in Newtown.

Update 4:05 p.m.: The principal killed during this morning's shooting has now been identified by CNN as Dawn Hochsprung. They add that three guns were found at the scene: a .223 Bushmaster, a Glock, and a Sig-Sauer.

Update 4:10 p.m.: After a lot of confusion about the identity of the shooter, it now is being reported by the NY Post and other news outlets that 20-year-old Adam Lanza, and not his 24-year-old brother Ryan, is the suspect. CNN has officially "unnamed" Ryan Lanza as a suspect, and law official tell AP, "School shooting suspect is 20-year-old son of teacher; older brother questioned."

Update 8:49 p.m.: Now it's been reported that the suspect's mother was actually found dead in her home and it's unclear if she a teacher at the school. Also, Nancy Lanza legally owned three of the weapons, which included a Glock and Sig Sauer.

#connecticut
#newtown
#newtown shooting
#sandy hook elementary school
#school shooting
#shooting
Do you know the scoop? Comment below or Send us a Tip