Thousands of Occupy Wall Street protesters have now begun filing into Times Square for a massive Occupation Party, in part to celebrate the spreading of OWS across the globe today. The police have begun setting up barricades to keep the protesters within certain areas, and portions of the sidewalks have become almost impassable. However, the mood around midtown is joyous—you can watch a live stream from there below, and we'll be giving live updates for the next few hours. [More Updates Below]

According to James Thilman, our reporter at the scene, there are sporatic eruptions of extended cheering between chants: the usuals, such as "Banks got bailed out, We got sold out, Whose street? Our streets!" and, "we are unstoppable, another world is possible." Police are keeping people—particularly bewildered tourists—on the sidewalks moving, while protesters are confined to large areas in the center of the square, with limited entrances to barricaded area. There are lots of people with tambourines and other instruments, and the crowd continues to grow ever larger.

Update 6:35 p.m.: Reports are coming in that police have started arresting rowdy protesters. There have been reports of mounted policemen pushing back and forth with boxed in protesters—and it seems at least one man ascended a traffic light to flash the peace sign (and now is doing a "mic check"). 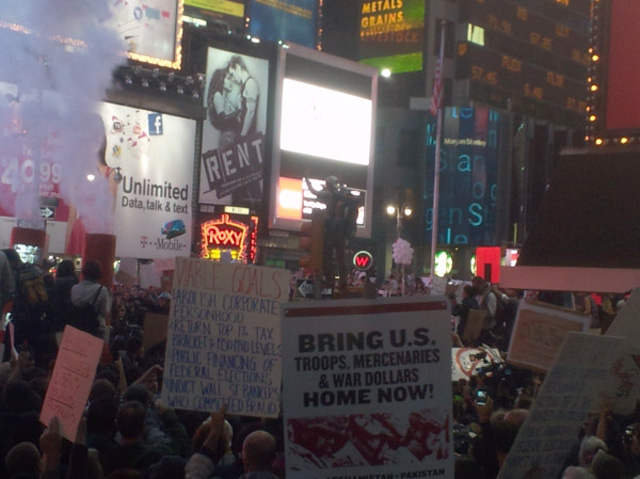 Update 6:45 p.m.: NewYorkist tweets that he's seen, "At least two large NYPD trucks moved into Bway, coming north of 46th full if barticafes. Currently placing them in pedestrian plaza." With the square packed in as it is already, and more and more people joining in on the occupation, it's hard to imagine the police barricades, which are keeping people on the sidewalks and in designated areas, lasting through the whole evening. However, it seems to be working thus far: police have just started letting traffic come through 7th Avenue. 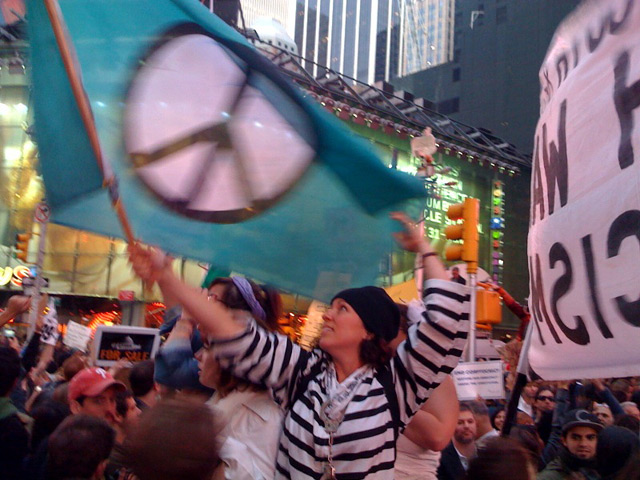 Update 6:54 p.m.: According to @Jopauca, the older cop you can see in the picture below has pushed at least two protesters. 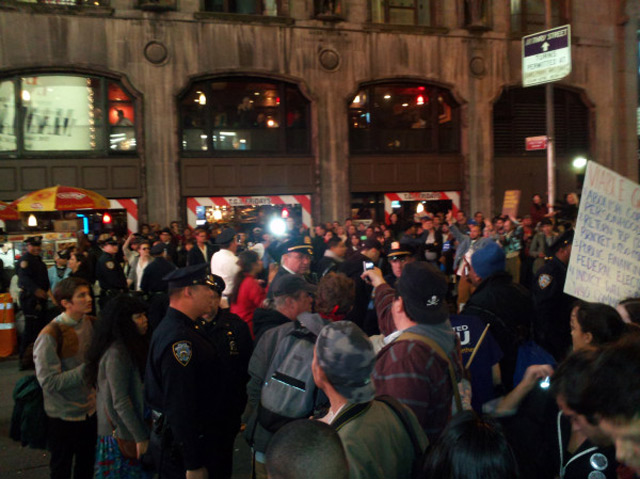 In addition, it was announced on the microphone that horse cops and riot police have lined up, and the NYPD are "asking everyone to exit east on 46th. Including those on the sidewalk." According to The Nation publisher Peter Rothberg, "WNBC reporting 10,000-20,000 in Times Sq."

Update 7:02 p.m.: NYCLU clarifies a bit on how the police are trying to control the square: "lots of riot police, everyone's barricaded, people are allowed out of area, but not into the area." Some protesters believe the police are preparing to make mass arrests now that protesters have been completely barricaded in. 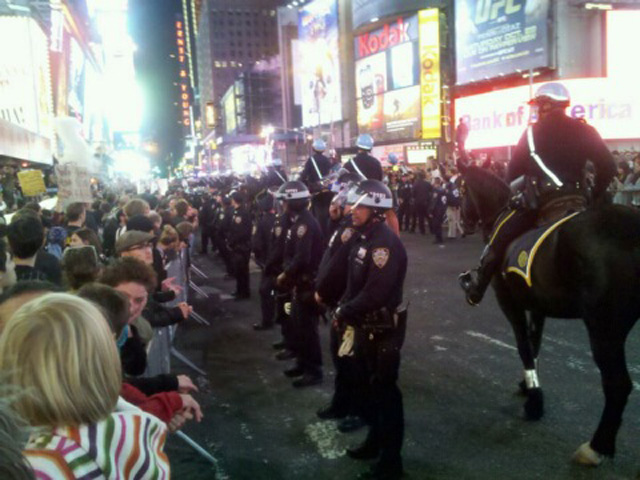 Update 7:15 p.m.: The city has now officially decided to close southbound 7th Avenue between West 57th and West 46th streets because of the protesters: "Expect traffic delays and changing traffic patterns in the area." Police are not letting anyone back into Times Square, while making more room for vehicles. Michael Moore is still inside the barricades though. Tonight's General Assembly is scheduled for 10 p.m. at Washington Square Park.

@Jopauca tweets, "A fuckload of police in riot gear just arrived with helmets, batons, and zipties." Newyorkist estimates there are at least 40 of them lined up now. Things seem to be getting more aggressive and tense by the minute.

Hundreds of people have sat down in front of the ABC building chanting, "Whose Square? OUR Square!" 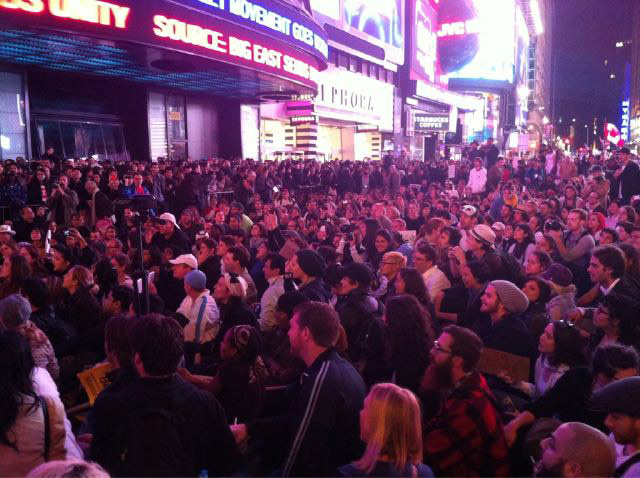 Update 7:30 p.m.: @Jopauca tweets, "Cop just told me to beat it if i wanna get home safe." The infamous orange nets have been taken out.

Cops are doing whatever they can to move people out of the square—46th street has now been locked down. People are only being allowed to exit as cops take over the street. 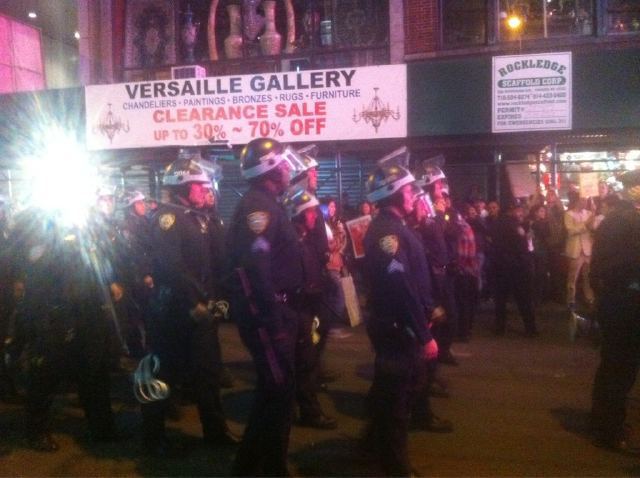 And according to Nation published Peter Rothberg, police have given protesters their last chance to leave peaceably: "According to multiple sources, all #OWS protesters in Times Square now face arrest if they don't immediately proceed out of the area."

Update 7:45 p.m.: While most people are slowly streaming out, the remaining protesters who are not walking toward Washington Square Park are standing their ground, reciting the 1st amendment while cops push in around them. The Daily News reports, "NYPD saying someone is going to get hurt if 46th St. isn't cleared."

And like clockwork, it seems to have begun, according to @Jopauca: "Cops are shoving the fuck out of the crowd now. Everyone is filming and photographing."

Update 7:50 p.m.: According to @HyunINC, "They just announced that there's an afterparty with food and @TalibKweli at Washington Sq Park."

Police have started arresting protesters. According to GottaLaff, "Older man dragged across street, put in paddy wagon. Others put in wagon too." 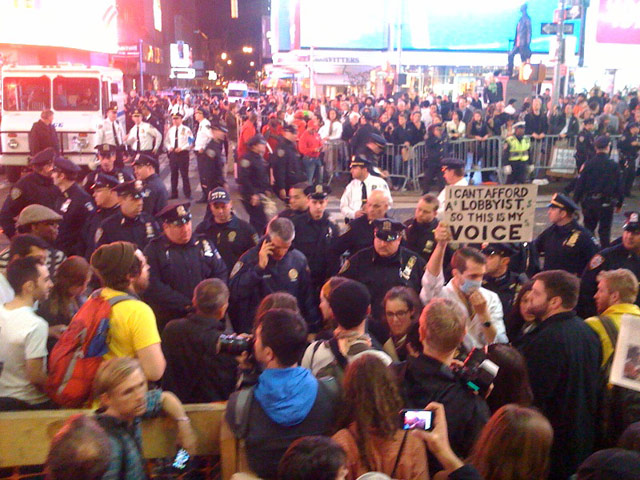 Update 8:00 p.m.: Below, check out some video taken from above earlier this evening when protesters first started packing into Times Square.

Update 8:10 p.m.: According to James at the scene, things are getting worse between the few remaining protesters (approximately 150-300) and riot police: "Getting super confrontational. Police say "step back!" protesters chant "you step back!! You step back!!""

Update 8:20 p.m.: According to the NYCLU, the arrests of protesters continues, although there are no exact figures yet how many so far: "lots of arrests, wagon full of folk...another wagon showed up, preparing for more arrests? yep, more arrests." However, there is also a report that two NYPD officers transported to hospitals with minor injuries. 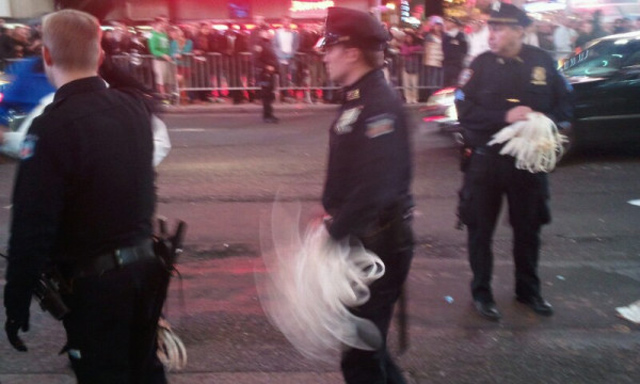 According to our reporter on the scene Nicole Woszczyna, protesters are pleading with cops to join them, and not to make them disperse: "crowds chanting to nypd 'we're doing this for you' and 'love us back.'"

Also, guess who is there: hipster cop! 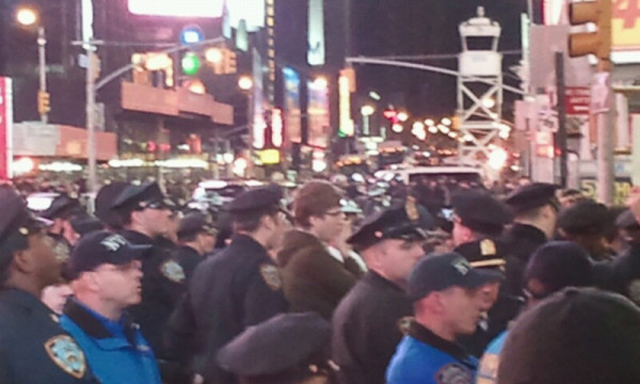 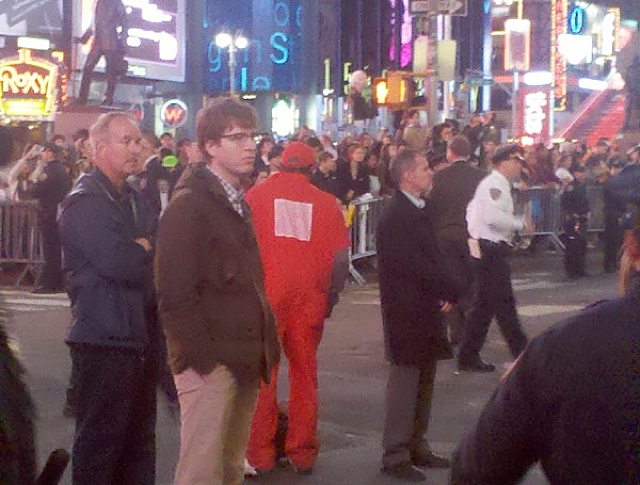 Update 8:30 p.m.: According to the Daily News, police have confirmed that 71 protesters were arrested in Times Square this evening. 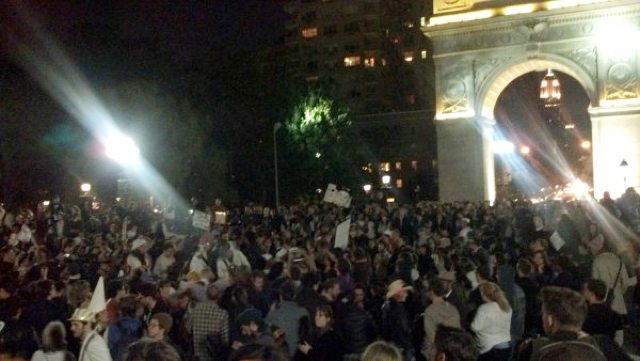 Update 9:20 p.m.: NewYorkist believes there are around 800 people at Washington Square Park. Also, no Talib Kweli: " Announcement was incorrect “@TalibKweli: @HyunINC I was out there with the kids all day I'm at the crib now”"

And here's video of the scene there: 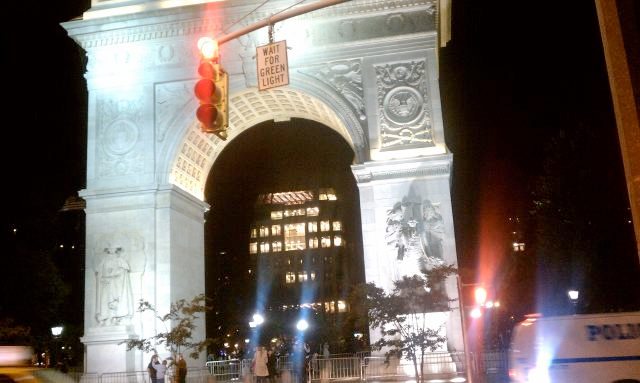 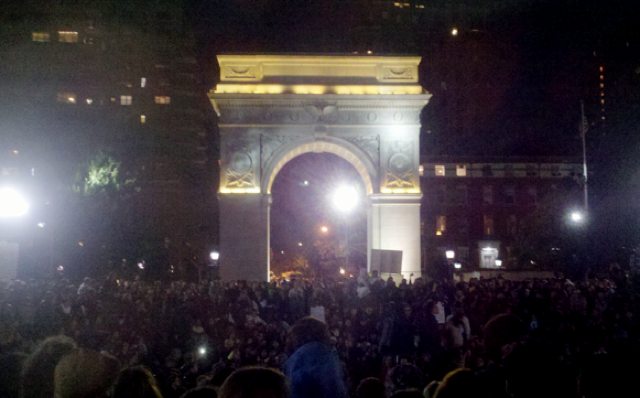 Update 11:12 p.m.: Reuters' Anthony De Rosa Tweeted, "General Assembly taking place now in Washington Square Park, on the table is a decision to stay in the park past the midnight curfew " and "Cooper Union Park is being discussed at General Assembly as an alternate park to occupy. Smaller, easier to defend."

Update 11:35 p.m.: Thilman tells us that at the General Assembly discussion, a protester says to crowd, "Ask yourself, are you against parks closing at midnight or wall street? We need real estate, but we need to get it in the smartest and most strategic way possible." Also, three police buses just pulled up across from the park.

Thilman adds it seems only a small portion (10-20%) of those gathered "raised their hands when asked who is willing to stay and get arrested. Most want to table discussion and disperse rather than risk arrest."

Witnesses say there are dozens of cops on the scene, many in riot gear. 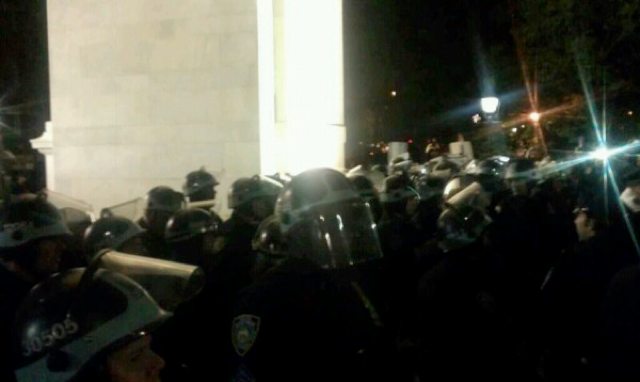 Update 11:50 p.m.: The Local Tweeted this photo, "Police lining up against #ows protesters/photographers under arch - closing of WSP in 15 min, most heading to zuccotti." 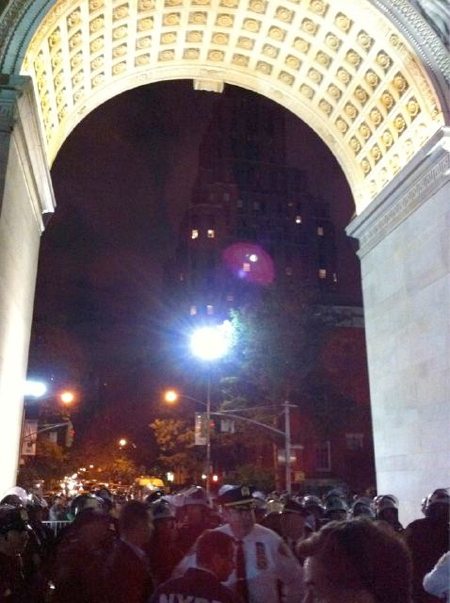 Update 12:12 a.m.: Most have left Washington Square Park, though some remain. Protesters are heading to Zuccotti Park or Cooper Triangle, the park by Cooper Union, "for possible stand there."

Update 12:24 a.m.: Via police scanner, report of a cop car window being broken at Astor Place and Lafayette.

Update 12:42 a.m.: Mother Jones writer Josh Harkinson was nearly arrested when he was trying to film an arrest at Washington Square Park, " Also, he Tweeted, "The cop said all the police have been up long hours and are tired and just want to go to sleep."

Gothamist is turning in now—we'll have more in the morning; in the meantime, follow @AntDeRosa, @NewYorkist for updates.