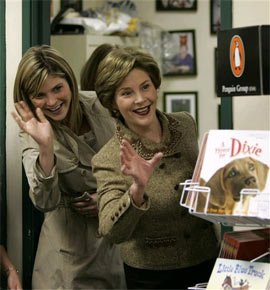 Who knew that Laura Bush and daughter Jenna Bush's children's book tour would prompt violence? The Post reports a wheelchair-bound girl was assaulted by a Bush protester after the Bushes' 92nd Street Y appearance on Tuesday.

Apparently German Tallis, 22, was protesting about Iraq and Iran, and John Lovetro said to him, "What are you doing? Shut up. This is about a child and books...Get out of here! You're being a moron!" But instead of getting upset with Lovetro, Tallis allegedly took it out on Lovetro's 18-year-old daughter Maureen who has cerebral palsy--and punched her in the shoulder blades and thigh.

Then the two men scuffled until police broke up the fight and arrested Tallis for assault and resisting arrest. Maureen Lovetro was not seriously injured.

The First Lady and her daughter were in NJ last night for their tour (no scuffles reported--yet) and are promoting the book through May 1--and then Jenna Bush will be married on May 10 at the "Western White House."

Update: Based on comments questioning the accuracy of the Post's article (one commenter writes, "In the girl's deposition to the police there is no mention of the protester punching the girl"), we've contacted the NYPD for more information about the incident. We'll update once we have an answer from the NYPD.

Update, April 30: We spoke to the NYPD, who said that police officers from the 19th Precinct were called to the 92nd Street Y about two disruptive people who refused to leave. According to the NYPD, Talis assaulted another person, causing a laceration, and was charged with assault 3. The NYPD said the Post's account of a wheelchair-bound teen being assaulted was untrue.

A second individual, Matthew Lepecak, was given a summons and released.

Photograph of Laura and Jenna Bush at a Glen Rock, NJ bookstore by Mike Derer/AP

#92nd street Y
#George Bush
#iraq
#Jenna Bush
#Laura Bush
#protest
Do you know the scoop? Comment below or Send us a Tip