Updates Below Two police officers were shot in their squad car in Brooklyn this afternoon. According to the FDNY, the shooting happened around 2:50 p.m. at Myrtle Avenue & Tompkins Avenue. Both officers were taken to Woodhull Hospital. Update: Police Commissioner William Bratton characterized the officers' death as an "assassination" and Mayor Bill de Blasio called it an attack on the "entire city."

Update: Cop sources tell the News that the shooting took place outside of the Tompkins Houses. "The perp came out of the houses, walked up behind the car and lit them up," the source claims. At least one of the officers was reportedly shot in the head.

The Post adds that the suspect was fatally shot.

About 100 cops at the corner of Marcy & Tompkins. Praying the cops injured are ok. So surreal. pic.twitter.com/eJNPFTswGa

Update: Officials now say both officers have died of their injuries. "It looks like they were shot in the upper body," Deputy Chief Kim Royster told the media.

According to AP, the suspect fatally shot himself in the subway station.

Update: The NY Post is now claiming that the alleged gunman made a couple posts on Instagram alluding to killing cops today. "I’m Putting Wings on Pigs Today,” reads one message, which included a photo of a gun. "They Take 1 Of Ours … Let’s Take 2 of Theirs. This May Be My Final Post."

One image is from a user on Instagram and another is from the scene (pants/shoes match) pic.twitter.com/KbENbZXLWW

I am begging the Mayor to stay away from this incident. There is no room for politics here.This climate is a result of politics. #NYPD

Update: Public Advocate Letitia James released the following statement: "My deepest thoughts and prayers are with the families of the police officers killed in the line of duty today. Every day, New York City Police Officers put themselves in harm's way to protect us. Today, the entire city mourns with the NYPD. We will never forget the sacrifice these brave officers made to keep our city safe, and we honor the service of New York’s Finest."

Al Sharpton just released a statement on the shootings of two police officers in Brooklyn pic.twitter.com/nSEvjgzfls

I am outraged at the killing of 2 police officers in Brooklyn. That is why we stress non violence as the only way to fight for justice.

An eye for an leaves the whole world blind. We all at NAN express our prayers and condolences to the families of the 2 NYC officers.

As a 22-year veteran of the New York City Police Department, a Brooklynite and, most importantly, as a human being that believes in decency, I am horrified and angered over today's senseless shootings in Bedford-Stuyvesant which have resulted in the tragic death of two of New York's Finest. I hope that every single person, regardless of their background or ideology, will join me in praying for the families of these fallen heroes, as well as for their brothers and sisters in policing who protect this city tonight with tremendous sorrow in their hearts. No task is more sacred than ensuring the public safety of our communities, and we must continue to support those men and women that are putting their lives at risk to look after our own.

This has been a trying period for New York City, and indeed our entire nation, as we have wrestled with longstanding challenges of equity and fair treatment in our society. I have been among those that have called for reforms to our law enforcement and criminal justice systems. However, it must be perfectly clear that reform can never and must never mean retaliation; this is a fundamental tenet that I do believe I share with every law-abiding New Yorker, including those who have responsibly exercised their right to expression in recent weeks.

As we move forward in the difficult days ahead, we must be united, not divided. We can disagree, but we must not be disagreeable toward each other in a way that may create fissures between us. I hope that we will honor the memory of all of those we have lost to senseless violence, including these officers, and build a path to a safer and more just city that cares for every one of us.

Just this past week, I held a moment of silence outside Brooklyn Borough Hall, where we beat a drum seven times to remember seven NYPD officers who lost their lives this year. I carry a heavy heart knowing we must add two more drum beats to that terrible tally tonight.

Sources tell NY1 that "the suspect may have killed someone in Baltimore before coming to New York with the intention of killing members of the NYPD."

You can see video from just after the shooting below:

Update (7:34pm): The NYPD is holding a press conference at Woodhull Hospital now.

Police Commissioner Bratton is speaking to the press from the podium, with great emotion in his voice. He and the mayor have visited with the families. Shooting was at 98 Tompkins Avenue. Both officers were from the 84th Precinct in Downtown Brooklyn, but posted at Tompkins Houses in Bed Stuy as part of a crime reduction program. Officer Rafael Ramos was driving, Officer Wenjian Liu was in the front passenger seat. Both officers were in uniform, seated in vehicle, when they were shot by suspect Ismaaiyl Brinsley. Officers had no time to react. 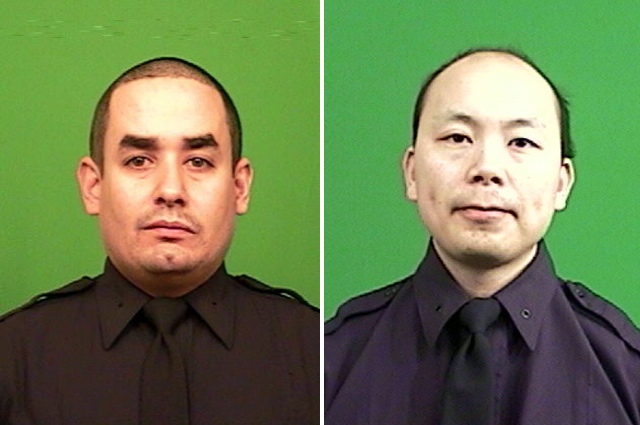 Other officers from a nearby post pursued shooter down Myrtle Ave to the Myrtle-Willoughby Ave subway station on Marcy Ave. Brinsley shot himself on the westbound G subway platform. Officers were transferred to Woodhull and died. Suspect was transported to Brooklyn Hospital, where he was pronounced dead.

Commissioner provided background information: at 5:45am outside Baltimore, Brinsley shot girlfriend at her residence, seriously injuring her. At 2:45pm Baltimore sent a warning flyer to NYPD based on information Brinsley had posted on the internet threatening police officers, which was at almost the same time of the shooting. This is the 7th time partners have died together since the 1970s.

Bratton: unfortunate reality of putting on NYPD uniform that is that you become part of thin blue line btwn us and anarchy

Mayor Bill de Blasio: "our city is in mourning. Our hearts are heavy. We lost two good men who devoted their lives to protecting all of us."

The mayor is emphasizing the need to report threats of violence against the police made on the internet or elsewhere.

The mayor's voice is breaking as he describes meeting the families both officers, and, including the wife and 13-year-old son of Officer Ramos. Officer Liu, 32, was married only two months ago, and Ramos recently celebrated his 40th birthday.

The blood of 2 executed police officers is on the hands of Mayor de Blasio. May God bless their families and may they rest in peace.

The Post reports the mayor received a similar message in person at the hospital:

The two officers were pronounced dead at Woodhull Hospital, where their colleagues and family members huddled tearfully.

“We’re all in this together,” the mayor told grieving cops, according to a cop who was there.
“No we’re not,” one officer said tersely in response.

Police officers also turned their backs to De Blasio as he entered Woodhull:

Update (9:06pm): Azi Paybarah from Capital is reporting that the PBA is denying that they sent the statement quoted above. The New York Times hasn't removed it yet.

#Bedford-Stuyvesant
#bedstuy
#brooklyn
#cops
#nypd
#police
#shooting
Do you know the scoop? Comment below or Send us a Tip