UPDATED Map: What Your Monday Morning Commute Will Look Like (Now With A Train!)

As Mayor Bloomberg excitedly announced this morning, more than 80% of the MTA transit system has now been restored since Hurricane Sandy shutdown the subways for days last week. However, as Bloomberg also noted, tomorrow morning's commute is probably going to suck badly.

MTA Chairman Joe Lhota said straphangers should expect fewer trains tomorrow, as well as "significant crowding." Even though 80% of the lines are restored, it'll carry less than 80% of normal capacity. And that's because Lhota says, "we are concerned if we overtax the system, the system could come down."

UPDATED: You can go here to see a PDF of the latest MTA subway map, which among other things, shows cross-river service has been restored on the A, C, D, F, M 2 & 3 lines. The MTA is hard at work now to restore the B, G and Z. But they caution that the two lines that will take longest are the L's Brooklyn-Manhattan access and the G; they might not be ready till later this week, at best. 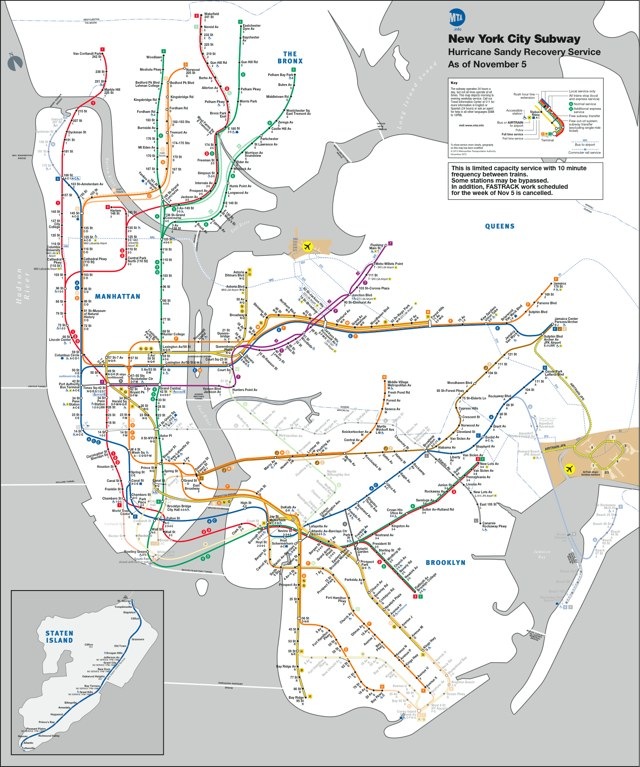 The MTA offered this plea to commuters: "Subway and bus riders, if possible, we recommend commuting earlier in the morning or later in the day to help reduce overcrowding tomorrow." Keep checking here for more service updates.