A man was shot in the leg by police officers on a Brooklyn street last night, and the NYPD says that he was armed and had fired at detectives first.

NYPD Assistant Chief Jeffrey Maddrey, Commanding Officer, Patrol Borough Brooklyn North, said three plainclothes detectives from the Brooklyn North Gang Squad were on patrol in an unmarked vehicle when they "observed a black Lexus sedan in front of them come to a stop in front of 656 Howard Avenue- where a large group of people were assembled outside."

The driver of the Lexus exited the vehicle with a firearm in his hand. As he motioned toward the crowd, the three detectives, who were assigned to plainclothes duty, exited their vehicle and gave the command, "Police, don't move."

At that point, the driver turned toward the officers and fired his weapon. An exchange of gunfire between the suspect and the detectives ensued.

The suspect then fled the location on foot. He was apprehended less than one block away, on Sutter Avenue between Howard Avenue and Grafton Street. The suspect's weapon was recovered. The suspect sustained a gunshot wound to his left leg. He was transported to Brookdale Hospital and is in stable condition.

Maddrey also said that the detectives, who were not hit by any bullets, were taken to Jamaica Hospital for observation. Police released an image of the gun they retrieved: 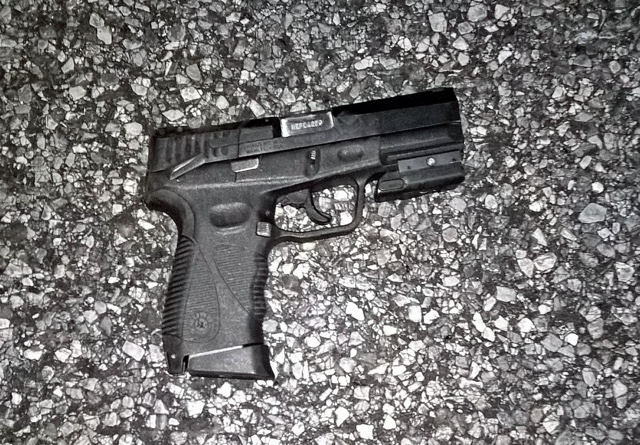 The investigation is ongoing.

Update: 3:15 p.m.: 44-year-old Kowon Davis has been arrested for the criminal possession of a weapon and for menacing a police officer.

#brooklyn
#gun violence
#nypd
#police involved shooting
Do you know the scoop? Comment below or Send us a Tip