Inwood residents who fear a proposed rezoning and new residential development project will further the neighborhood's gentrification clashed with their local councilmember during a confrontational rally and press conference.

On Monday evening, locals assembled at the corner of Sherman Avenue and Broadway to protest the proposed rezoning of 4650 Broadway, which would allow the Acadia Realty Trust to construct a mixed-use building, at least 15 stories tall, on the site. If the rezoning passes, 4650 Broadway will be the first development to be constructed under Mayor de Blasio's Mandatory Inclusionary Housing plan.

According to Inwood resident and community organizer David Friend, the rally was originally supposed to be held outside Councilmember Ydanis Rodriguez's district office at 177th Street and Wadsworth Avenue—and it had been planned over a week ago—but organizers changed locations after Rodriguez announced on Sunday night that he would be holding a press conference at the site at the same time as the rally.

"Ydanis's office was aware of [the rally]. There was flyering throughout the community and on social media. In the middle of last week, Northern Manhattan Is Not For Sale sent a letter to Rodriguez's office saying that there would be a rally," Friend said. "It was made clear that Rodriguez was welcome to come and speak at the rally." Rodriguez scheduled his press conference for 6:30 p.m., which caused what Friend called a "clear conflict."

At a previous rally, Rodriguez had stated that the rezoning of the site, which is currently a parking garage, would bring desperately-needed affordable housing to the neighborhood. Opponents argue that the affordable housing planned for a rezoned 4650 Broadway would still not be affordable to most people in the neighborhood. Under Mayor de Blasio's MIH program, 20% of units in Sherman Plaza would be required to be affordable for New Yorkers who make approximately $31,000 a year, which is 40% of the Area Median Income (AMI). The average annual income in the neighborhood is roughly $37,000, [pdf] for a family of three.

"East of Broadway, AMI is about $25,000," argued rezoning opponent George Fernandez, who is running for state assembly, on WNYC last week. "They will not qualify for any of this units [at 4650 Broadway]. It’s a lottery, meaning anyone from the five boroughs will have an opportunity to live there. Maybe one or two, or a handful, of families will live in the building." 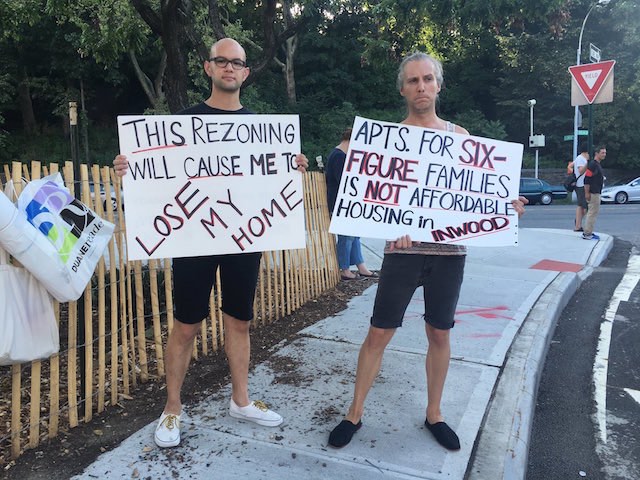 Although Rodriguez was scheduled to appear at 6:30 p.m., he did not take to the stage until nearly half an hour later. In the interim, protesters and Rodriguez supporters exchanged harsh words. During a chant of "Vota no!" a Rodriguez supporter yelled, in Spanish, that the protesters were "racist" and had "been bought by the whites." During an introduction by Rodriguez's Chief of Staff Carmen De La Rosa—who urged attendees to "please listen" and "open your ears"—Rodriguez's community liaison, Kiana Diaz, told a protester to "shut the fuck up."

Following last Saturday's protest of the proposed rezoning, Ava Farkas, Executive Director of the Metropolitan Council on Housing, a tenants' advocacy group, told Gothamist that Rodriguez had held various community forums in which members of the community felt silenced and ignored.

By the time Rodriguez appeared, he made it clear he would not tolerate heckling of any kind during his speech.

"Tonight, this evening, you will listen. Wait until my last sentence... When I'm finished, make your judgement." Rodriguez said, "If you [heckle me] again, I will leave and I will make my decision tomorrow."

During a 30-minute-long address in both Spanish and English, in which Rodriguez praised Mayor de Blasio's Mandatory inclusionary housing program and efforts to increase the supply of affordable housing, the councilmember was regularly interrupted by both cheers and boos from the audience. Finally, Rodriguez announced he will be voting against the rezoning during Tuesday's Land Use Committee hearing. 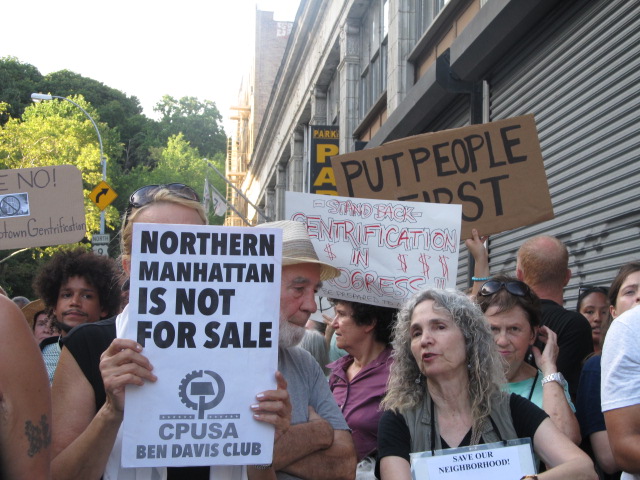 "We have seen what happened in Bushwick when a developer threw away the promise they made with a local councilmember in the trash by selling the building," Rodriguez said, referring to the former Rheingold Brewery site, which will soon be home to at least one million square-feet of luxury housing.

"It has been my focus in this process to guarantee, in the strongest way possible, that this does not happen here in Inwood." Rodriguez then reiterated his support for both his community—"even those of you who interrupt"—and for de Blasio's MIH program before disclosing his vote.

"We have not been able to get to a point where I feel it's in the community's best interests to move this spot rezoning forward," Rodriguez announced before immediately being drowned out by cheers.

Nonetheless, both Rodriguez's vote and his decision to hold a press conference during a planned rally confused locals.

"He could have gone to the planned rally, which frankly, would've had a lot more people [in attendance], said he was opposing the vote. He would've gotten a hero's welcome," Friend said. "Instead, he pissed everyone off by setting up a parallel conference at the same time, which undid a lot of work the organizations opposed to [the rezoning] had done."

In a Facebook statement, Rodriguez again stressed that although he would be opposing this particular rezoning, he would continue to fight to bring sorely-needed affordable housing to his community.

The Land Use Committee, of which Rodriguez is a member, is voting on the rezoning this morning. If the vote passes in both the Land Use Committee and the Subcommittee on Zoning and Franchises, it will be considered by the full Council. And if the rezoning is voted down, a luxury building could still go up at the location, but limited to 14 stories and with no affordable housing requirement.

UPDATE, 7:08 p.m.: This morning, the Land Use Committee voted down Acadia's rezoning proposal. On Twitter, Councilmember Rodriguez reiterated his office's commitment to "building affordable housing uptown" despite the vote against the Sherman Plaza rezoning.

"Today, we witnessed the result of our community taking action. We are pleased with the outcome but must remain firm going forward to preserve this neighborhood and keep it affordable. I would like to thank all the people who made this victory possible."" Assembly Member Guillermo Linares said in a statement. Linares had been vocally opposed to the rezoning in the weeks leading up to the vote.

[Disclosure: I interned at Rodriguez's legislative and district offices for two months in 2014]