While the WWF rejected DDB ad agency's terrible idea for a campaign, the spec design still made it to the One Show, won an award, and is now causing them about 100 times more problems than the Tsunami (which incidentally killed 100 times more people than 9/11).

Yesterday we heard from the WWF, who took swift action in making it clear they were in no way supporting this ad; last night Keith Olbermann declared the agency The Worst; and now the U.S. division of DDB has spoken out, blaming it on their Brazilian branch:

“The ‘Tsunami’ ad for World Wildlife Fund Brazil was created by a team at DDB Brazil in December 2008. The team in question is no longer with the agency. DDB Brazil apologizes to anyone who was offended or affected by the ad. It should never have been made and it does not portray the philosophy of the agency.”

We're still waiting to hear from the One Show, and have also contacted DDB's Jeff Swystun for further comment on why this ad was ever even entered into a contest.

UPDATE: President of the One Club, which puts on the prestigious One Show, has responded to our request for comment. Kevin Swanepoel tells us, "The ad was withdrawn by DDB Brazil. It is not a merit award winner in the One Show and will not appear in the One Show Annual." That's great, except yesterday it was on the One Club's website listed as a winner. In fact, here's a screenshot! 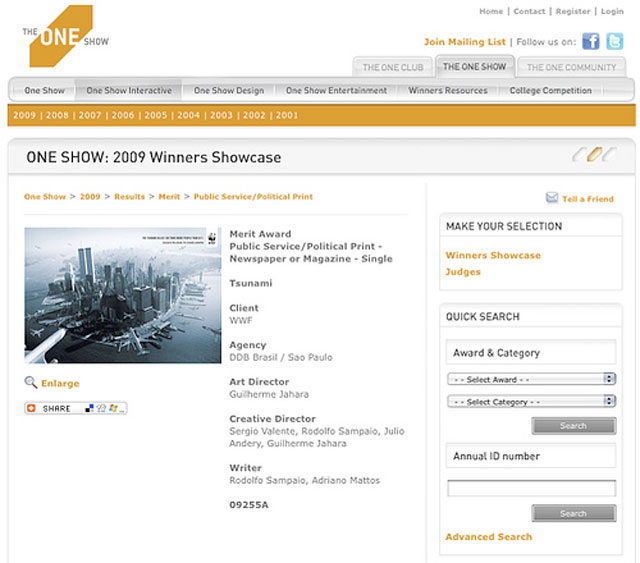