UPDATE: Your Subway Ride Is No Longer Delayed Because Of An Escaped Prisoner In Harlem

WABC 7 reports, "Police are looking for an escaped prisoner from the 30th Precinct who ran into the 145th Street subway station. He was preliminarily described as a white male, 5'6" wearing blue jeans and a yellow sweatshirt."

UPDATE: It turns out the prisoner was someone the cops had picked up in connection with a series of thefts. City Room reports, "After a man was arrested at his home... he jumped out of a police car near 145th Street and St. Nicholas Avenue in Harlem around 10:15 a.m., pushing an officer and scurrying into a nearby subway station."

The police say the situation is still under investigation.

By the way, the image is of actor Wentworth Miller, who played Michael Scofield in the 2005-2009 Fox drama, Prison Break. Scofield got himself sentenced to prison in order to free his brother, who faces a death sentence for killing the vice president's brother (of course the brother was framed). Scofield happened to be an engineer and tattooed his escape plans on his body.

UPDATE 2: The MTA now says, "Following an earlier incident, A, B, C and D train service has resumed with residual delays." Which would lead one to believe the prisoner has been apprehended (WPIX confirms that) —but the police only say that the matter is still under investigation.

UPDATE 3: According to City Room, the suspect is still at large. Also, he has been identified as Vincens Vuktilaj, who is wanted for snatching necklaces off old ladies in the Bronx:

On Monday morning around 10:15 a.m., [Vuktilaj]...was being escorted down the stairs of his building in Harlem when he pushed at least one officer and fled, disappearing into the 145th Street subway station of the A, B, C and D lines on St. Nicholas Avenue, the police said.

The entire B line and parts of the A, C and D were shut down at 10:55 a.m., transportation officials said. Normal service was restored shortly after 1 p.m., they said, but as of 1:20 p.m., the police said, Mr. Vuktilaj was still at large. He was last seen wearing jeans, a yellow shirt and no shoes.

A train conductor apparently told cops that the suspect was seen in the subway. 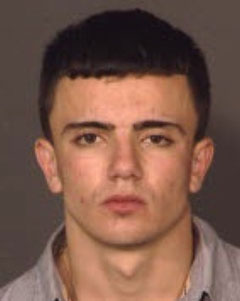 UPDATE 4: The NYPD finally released a statement and photograph about the escaped prisoner, Vincens Vuktilaj, and hope the public can help find him. Please note: He is not Wentworth Miller.

According to police, at 10:14 a.m., detectives went to 746 St. Nicholas Avenue"to apprehend a suspect wanted in connection with a past grand larceny. The suspect was handcuffed and was being led from the building when he broke away from investigators, ran southbound on St. Nicholas Avenue, and was last seen entering the West 145th Street subway station. An investigation is ongoing."

Vuktilaj, who is 18, is described as approximately 5'6", 125 lbs., with brown eyes and black hair. He was last seen wearing a yellow long-sleeve sweater, blue jeans, black socks, and no shoes.

Anyone with information regarding this suspect is asked to call Crime Stoppers at 1-800-577-TIPS (8477). The public can also submit tips by logging onto the Crime Stoppers website at WWW.NYPDCRIMESTOPPERS.COM or by texting their tips to 274637 (CRIMES) then enter TIP577. All calls are strictly confidential.

A string of court precedents have whittled away at public corruption theories, to the benefit of Brian Benjamin, Joe Percoco and others.

Early Addition: Caroline's comedy club is closing because its landlord, the Kuwaiti sovereign wealth fund, is jacking up the rent

By
James Ramsay
Early Addition: Caroline's comedy club is closing because its landlord, the Kuwaiti sovereign wealth fund, is jacking up the rent

By
James Ramsay
Long-delayed project to convert compost, waste into gas for NYC homes slated to launch in January
By
Sophia Chang
Pilot program pays for homeless and housing-insecure CUNY students’ rent
By
Chau Lam
FDNY rescues 2 after fall down elevator shaft inside Bronx Target
By
Catalina Gonella
Get the news New Yorkers need in your inbox