A tower at the World Financial Center has been evacuated due to a suspicious package, which employees in the mail room say appears to be a grenade. The NYPD tells us 2 World Financial Center has been evacuated, the ESU and bomb squad are at the scene, and additional officers have been called in for crowd control. We'll update as we know more, but if you want a bird's eye view, Fox 5 is doing a live video feed. (So far it's not very interesting, and let's hope it stays that way!)

On Twitter, Robet Hak writes, "So my coworker just got a call from his wife. Works across from WTC. Her building was just evacuated and she was told 'just keep walking.' "

"I was in 2 World Financial Center when it was announced there was a police investigation and it was not a drill," says Anita Jandu, who works for Deloitte. "I was on the 8th floor, and we all proceeded down the stairs in a very orderly way. Once outside we were ushered toward the Hudson River, where we're now waiting around on a pier. Some people are going home, the rest of us are just hanging out."

Update: The NYPD now says, "NYPD Bomb Squad determined suspicious package was a grenade-like novelty item mounted on a plaque with a sign: "Complaint Dept. Pull Pin." We guess it looks something like this: 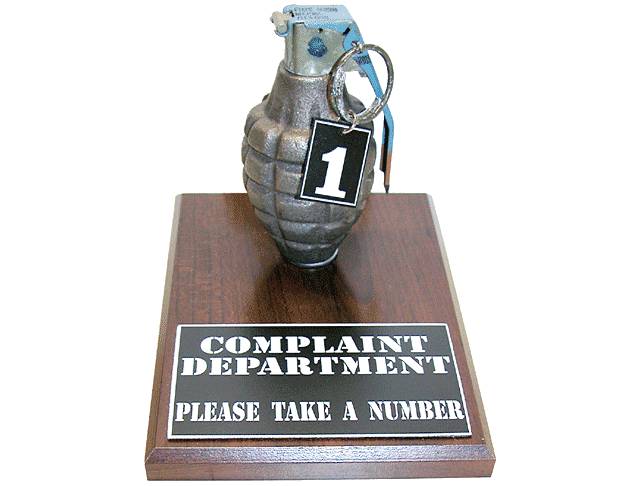 #bomb threat
#suspicious package
#world financial center
Do you know the scoop? Comment below or Send us a Tip