A block of sidewalk on University Place is currently closed off after an unidentified individual jumped from a window in a building at 113 University Place, between 12th and 13th Streets. The FDNY tells us they received a 911 call at 11:50 a.m., and the individual was reported DOA. A spokesman for the department did not have any information about the gender, but one witness says the jumper was female. We'll update as more information becomes available.

Update 1:35 p.m.: A woman who works on the 11th floor of the building in A&M Octone Records tells us she encountered the person who jumped minutes before her suicide. The employee, who asked to be kept anonymous, tells us she saw the woman in the lobby of her office on the 11th floor and describes her as a middle-age blonde woman. "I asked her who she was here to see, she said someone was coming to meet her in the lobby," our source tells us. "She didn't look distressed but it didn't seem like she knew anyone at the company. I thought she was lost."

Soon after the employee realized what had happened, investigators showed her a photo of the woman who jumped, and she confirmed it was the same woman. No other details about the woman's identity have been divulged by officials at this time, but it's believed she jumped from the 7th or 8th floor, not from the level where the A&M Octone employee encountered her.

Update 2:46 p.m.:According to Joey Boots, the Medical Examiner arrived at the scene a few minutes ago, and the body has finally been removed: 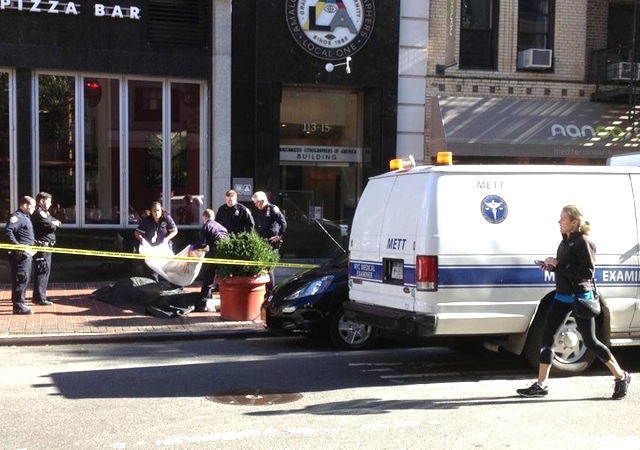 I just saw a person jump out of a window and die near NYU. The time before the police arrived was surreal. We all stood quiet, cabs beeped.

What appeared to be a college-aged girl jumped out a 7th floor window on University Pl. btwn. 12th & 13th Sts. Near NYU twitter.com/JoeyBoots/stat…

NYPD at University Place crime scene after a fatal fall or jumper flic.kr/p/dmVNrc

(Thanks to Joey Boots for the tips.)

#jumpers
#suicide
#university place
#original
Do you know the scoop? Comment below or Send us a Tip