A woman out for a smoke late last night fell to her death after the railing broke on her 17th floor balcony.

Jennifer Rosoff, 35, was with an unidentified man on her East 57th street balcony when she either leaned or sat on the railing, which gave way. Rosoff fell 17 stories on to a metal scaffolding and was pronounced dead on the scene. 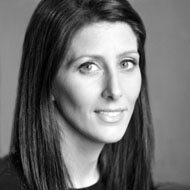 Sources tell DNAinfo that Rosoff, who worked in advertising, was on the balcony with a man she had just met for a first date after an online courtship. She propped her leg up on the railing to stretch, and sources say the man told her, "You know, you shouldn't do that." He claims she replied, "I do it all the time." Then the railing gave way.

"I heard a bang. I thought it had been a gunshot," neighbor Steve Hersch told DNAinfo. "Then I heard many, many sirens."

The building's balconies have been closed by safety inspectors, who report that they are "imminently perilous to life."

UPDATE: Rosoff was described to the New York Times as “an A-player” in the world of media advertising sales, who had worked at Lucky magazine and The New Yorker, before working at the media start-up TripleLift. Her Twitter was updated only a few hours before her fall.

Another deadly fall in 2010 led to a series of inspections by the Department of Buildings on the safety of Manhattan's aging balconies. It's not known the last time the balconies of Rosoff's building were inspected.

#death
#falling
#fatal fall
#jennifer rosoff
#manhattan
#sutton place
Do you know the scoop? Comment below or Send us a Tip